It packs a bootful of gadgetry and voodoo engines 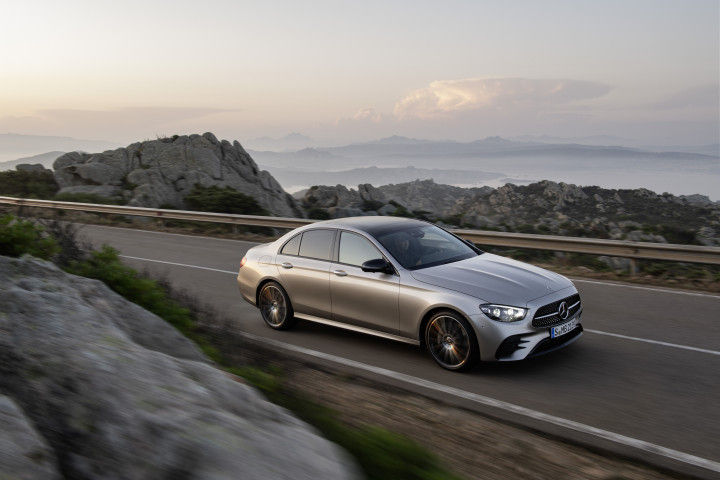 Mercedes-Benz has unveiled the 2020 E-Class globally. Changes include 7 plug-in hybrid variants, redesigned exteriors, and more advanced infotainment. The carmaker says the E-Class will reach European dealerships in summer 2020 and could make it to India in the second half of 2020.

The official teaser and preview shots had revealed two styling cues despite the camo: the bonnet bulge and new wheels. The former is reserved for the Avantgarde, AMG Line and All-Terrain variants. Mercedes claims that its new aero wheels can reduce fuel consumption. Other design updates include new front and rear bumpers, grille, and head and taillamps that take the last generation’s departure from boxy proportions to completion. It is identical to the outgoing model in the profile.

Step through the familiar doors and a panoramic display catches your eye. Lower trims get two 10.25-inch displays while dual 12.3-inch displays are available on better-equipped models. The MBUX infotainment system also gets an update and includes Linguatronic voice control and something Mercedes calls Augmented Reality.

In terms of features, the facelifted E-Class packs gadgets such as Distronic adaptive cruise control, steering assist, brake assist, parking assist, and Stop and Go Assist. Active Blind Spot Assist monitors the car when you come to a stop and stays on for up to three minutes after you turn off the ignition to prevent you from opening the door into people and vehicles.

Four engines are on offer: a 2.0-litre four-cylinder M 254 petrol, a 3.0-litre six-cylinder M 256 petrol, a 2.0-litre four-cylinder OM 656 diesel, and a 3.0-litre six-cylinder OM 256 diesel. The oil burners feature a total of three catalytic converters and two-stage catalytic reduction with AdBlue. The M 254 engine comes with a 48-volt mild-hybrid system which adds 20PS and 180Nm of torque for a total power output of 292PS. Mercedes is yet to disclose specs for each engine.

The Mercedes-AMG E 53 4MATIC+ has a twin-turbo 3.0-litre petrol engine which gets an EQ boost hybrid system. This adds 21PS and 250Nm to the engine’s 435PS and 520Nm of torque. All of Mercedes’ new engines are turbocharged but also have an electronic compressor to reduce turbo lag. That’s how the AMG engine makes its torque from 1800rpm all the way to 5800rpm.

Mercedes showcased the sedan, estate, and all-terrain models and says that the cabriolet, coupe, and China-only long-wheelbase variants will soon follow. In India, the E-Class is Mercedes’ most popular model. We hope to see it later this year and be blown away by the carmaker’s internal combustion magic. Don’t count on the PHEVs coming to our shores, though. Expect a price hike over the 2019 model which retails between Rs 59.08 lakh to Rs 1.50 crore (ex-showroom Delhi).