The 2015 Mahindra Quanto facelift will feature a more aggressive front end design with an almost SUV-ish look. The new Quanto will go up against conventional MUVs like the Honda Mobilio and the Maruti Suzuki Ertiga and the Chevrolet Enjoy amongst others. 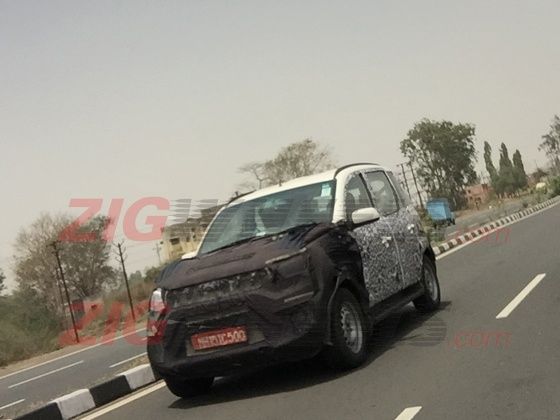 The Mahindra Quanto despite being priced rather attractively has failed to move Indian audiences the way we expected it to primarily due to its exterior design. While the design does appeal to some, most think the Quanto in its current avatar looks quite ungainly. This is why Mahindra has been working to update the Quanto and its front end design to give it an all-new look and feel.

As seen in the pictures, although heavily disguised, the new Quanto will gain a little more aggression and mass around its front end giving it a mini SUV type look rather than the curvy lines it has right now. Taking a leaf out of the current generation Mahindra Scorpio which has gone the same way, cutting down on its curves and using more straight lines and edges to accentuate its newly found appeal, the Quanto too is expected to get a new set of headlights and grille cluster. Although the basic shape of the Quanto will remain unchanged, the rear too will get some updates including new tail lamps and a plastic cladding on the tailgate.

The Mahindra Quanto is powered by a 1.5-litre, 3-cylinder, turbocharged diesel engine that makes 100PS of peak power and 240Nm of peak torque. The engine is mated to a five speed manual gearbox which in turn is mated to a rear wheel drive drivetrain. Expect the new 2015 facelifted Quanto to be more powerful and more fuel efficient than before.