You would have to look at the 200s if you if you are looking for your first performance naked. But Yamaha now finally has an alternative which might not win a game of trumps, but is an absolute joy inside the city. Is that enough to threaten the 200s’ territory? 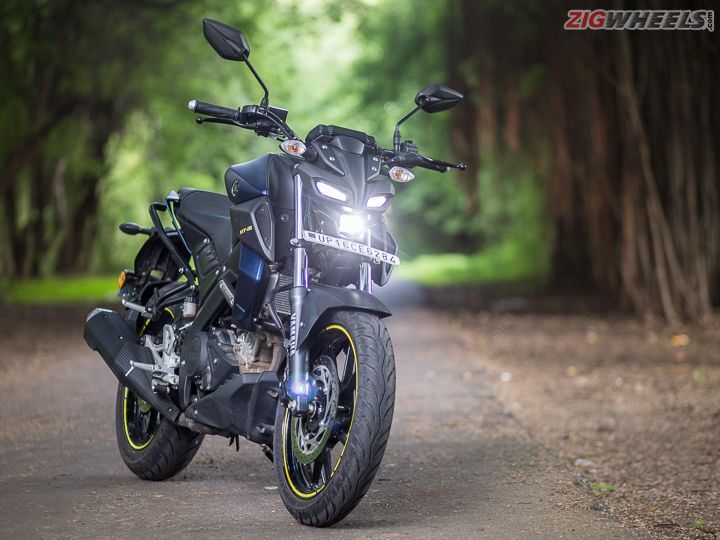 A streetfighter from Yamaha had always been a dream for Indian enthusiasts. The original FZ16 really kick-started this, but that was soon diluted into a muscular commuter. And while the FZ25 got our hopes up, it could never get the blood flowing and remained a handsome commuter at best. If you wanted performance from Yamaha, your only option was to turn to the R15. In its V3.0 avatar, the R15 packs the ideal engine-transmission combination for city, highway and track use. That said, putting up with the committed riding position and the stiff ride is like going through a workout session every time you swing a leg over the bike.

The MT-15 is supposed to bridge the best of both worlds: the FZ’s convenience with the R15’s mad performance. How does all of this translate in the real world?

The MT-15 makes its intentions clear right from its stance. The front is designed as a samurai warrior’s mask with bright white pilot lamps and round LED headlight which manages to light up the road well. The design involves a lot of creases in the mask itself and looks quite busy but that only adds to the drama.

From the side, the MT-15 gets a lot of muscular elements like the 10-litre fuel tank, sharp tank extensions which look like air intakes, and radiator covers. With these, the bike looks compact but powerful. The MT badge finished in silver too stands out in this configuration. The wheels get fluorescent highlights which are in sync with the MT logo, but the fluorescent green alloy wheels found on the international-spec bike are surely missed here.

The exhaust has been carried forward from the R15 and a redesign would have been more in sync with the bike’s sharper appeal. The small LED tail lamp looks smart, but we really think a tail tidy for the number plate holder would make the bike look even sportier. Overall, the MT-15 is one of the better-looking bikes in the segment and manages to garner a lot of attention, especially with that samurai-like face.

But we do have a complaint. The fit and finish of these body panels don't do justice to the design, or to the strong reputation for quality that the Yamaha brand has garnered. The plastics feel flimsier than the R15 V3.0’s, and that’s a bike which already got some flak for the quality of its compromised plastic.

While the MT-15 is just a naked version of the R15 V3.0, Yamaha seems to have cut corners in some places. Compared to its faired sibling, the MT-15 misses out on a cast aluminium swingarm, which has been replaced by a steel box-section one, and you only get single-channel ABS. Also, the new switchgear is an ergonomic nightmare. Not only are the horn and indicator switches interchanged, their awkward placement means you have to leave the handlebar grip when you want to reach them.

Speaking of ergonomics, there is no denying that the MT-15 is a lot more comfortable than the R15 V3.0. The tall and flat handlebar means you sit upright with a slight forward tilt, keeping you in a commanding position. The pegs are set slightly backwards as well. But the seat is fairly hard and would start to numb your backside over long highway rides, though it’s quite manageable even during extended city commutes. What's surprising is that though the rear seat looks small, it actually offers a decent amount of room and will be comfortable for an average-sized pillion. At 810mm, the seat height is 5mm lower than the R15 and should be accommodating for most.

The negative LCD display has bold readouts for all possible information you’d need. But because the console is placed so close to the handlebars, you will have to tilt your head to read it. Same is true with the rear-view mirrors as well. While the MT-15 is definitely our choice of the siblings in the real world, these small niggles hold it back from feeling like a thoroughly sorted machine. And while none of these are deal-breakers, it's not something we have come to associate with Yamaha. However, there is an easy way to fix all of these issues, or at least ignore them… just twist the throttle.

VVA magic on the streets

The R15 V3.0 redefined performance for 150cc motorcycles, and that same motor is present in the MT-15 as well. The engine revs cleanly all the way to its 12,000 rpm redline and nowhere in between does it feel like it's lacking drive. This has been achieved with Variable Valve Actuation (VVA). The engine uses two intake valve cams, one that works under 7,400 rpm and the other above it, ensuring linear and constant power delivery throughout the rev range.

This translates to clean acceleration off the line, especially in the city. The MT can even pick up from speeds as low as 30kmph in sixth gear without any fuss. You can open the throttle anywhere, in any gear, and the MT-15 feels lively and accelerates with a sense of purpose. While most of the nakeds like the RTR200 or the NS200 will have to shift close to 8,000 rpm, the MT-15 blows past the 10,000 mark with ease. This gives you a lot of freedom in the city to either hold a gear or shift up for overtakes. It feels absolutely mad and allows you to be on the ball all the time, making simple commutes feel like chase sequences from action movies.

The bike managed a 0-60kmph time of 4.21 seconds while reaching 100kmph took 12.08 seconds. These numbers are 0.72 seconds and 0.66 seconds slower than the R15 V3.0 respectively. The reason for this is a 4kg lighter kerb weight and a larger rear sprocket. Confused? Well, with the lack of weight at the front (also due to the upright riding position) and added torque at the rear wheel thanks to the shorter final gearing, the MT-15 likes to pop the front wheel during hard launches. And once you start going fast, wind resistance puts up another hurdle to get past.

However, these aspects work in the MT’s favour in city conditions. It takes 5.31 seconds for the bike to get from 30-70kmph in third gear, and 6.48 seconds to reach from 40-80kmph in fourth gear. These numbers are not only better than the R15 but the best amongst all the bikes we have tested up to the 180cc segment. Ride calmly and the bike will return an impressive 52.02kmpl as well.

On the highway, the MT feels stress-free till 95kmph, but you can still cruise easily at low triple-digit speeds. Beyond the 6500 mark, however, you will feel a buzz on the handlebars and footpegs. Stay south of 100kmph and the MT manages to return 48.58kmpl.

Then comes the gearbox. The 6-speed shifter on the MT-15 is possibly the best you can buy for this money. The shifts are sure, precise, and thanks to its short travel, very quick as well. Complementing this is the light assist and slipper clutch which makes shifting even from sixth to first a breeze.

Braking, with the single-channel ABS, though, leaves a bit to be desired. The bite feels lacking and the ABS itself feels a tad bit intrusive. However, the 282mm front and the 220mm rear disc offer good progression and the bike remains stable under hard braking. Still, 38.25 metres from 80kmph and 21.40 metres from 60kmph are not figures to write home about.

Go for the gap

Streetfighters are supposed to be sharp, precise and agile inside the city. The MT-15 is all of that. While Yamaha has kept the same rake angle as the R15, a shorter trail thanks to a fork offset helps its agility inside the city. The bike feels light on its feet and can be easily flicked in between traffic. And combined with that ever-energetic motor, the MT darts for every gap that opens up.

But push the MT-15 in corners and it’ll scare you at first. With the shorter trail and lighter front, the bike is very quick to tip in, which can be unnerving. This doesn’t inspire much confidence and forces you to think every time you plan on entering a corner. On top of that, when leaned over, the front end feels a bit vague and doesn't offer much feedback.

The suspension too has undergone a minor change of tune to compensate for the lighter weight and redefined purpose. While it's still stiff and will let you feel every bit of the road surface, the ride never gets jarring, even over larger bumps. The rear suspension’s rebound damping is a bit on the aggressive side, and sharp bumps will give you an occasional jolt, but it never feels overly stiff. That said, a softer seat or softer suspension would have gone a long way to improve its city prowess.

To the cash counter then?

Not so soon. The MT-15 will certainly leave a strong impression on you. But the bike is not without its flaws. It forces you to recalibrate how you use switchgear; the hard seat can be an issue on long highway stints, and you will need to rethink how you attack corners on winding mountain roads. Even the fit and finish of the motorcycle will at times let you down a bit. But there’s something to this motorcycle that really has you seeing past these problems.

That engine-transmission, for one, really speaks to your heart like nothing else. The motor revs like no other in the segment (or from one higher), and the VVA makes the bike feel alive every time you twist the throttle. Its might not feel as mad as the KTM 200 Duke but it definitely feels more polished, precise and refined, almost like a samurai. It makes every commute an event and that's exactly what you want from a streetfighter.

What’s going to pinch you is the asking price. Even with the lower-spec swingarm, single-channel ABS, lower fit-finish levels, a flat handlebar and fewer plastics, the MT-15 is just Rs 4,280 less expensive than the R15 V3.0. This begs the question... where did all of the cost-cutting go? Because, at Rs 1.36 lakh (ex-showroom Delhi), there's no getting around the fact that the MT-15 is an expensive proposition.