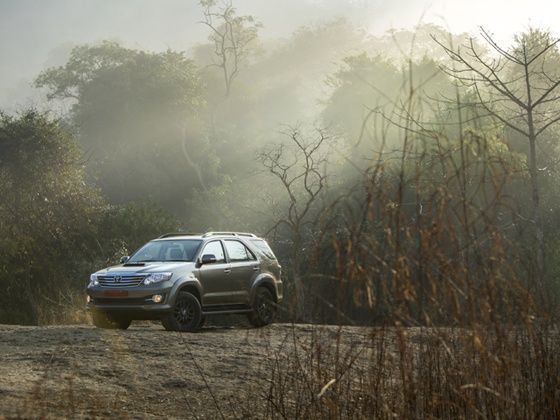 The Toyota Fortuner is one of the few cars in India that commands unparallel street cred. Although the car was originally launched with all-wheel-drive and two-wheel-drive versions, Toyota decided to only the latter an automatic gearbox. The Fortuner then, much to the annoyance of the typical luxury SUV customer lost out on a lot of clientele as it did not have a combination of both. Now though, Toyota has finally introduced the all-wheel-drive Fortuner with an automatic gearbox.

As always, the Toyota Fortuner is butch, manly and the perfect ‘politicians’ car’ for India. With its chunky wheel arches an aggressive stance, there are but a few cars that offer a similar road presence for the same kind of money. The new Toyota Fortuner goes a step further by adding subtle details making it better looking than ever before.

A set of new smoked headlamps for instance completely changes the front fascia of this large SUV giving it a sportier feel. The same smoked treatment has also been applied to the tail lamps which now look way better than before. Our personal favourite though has to be the new dark grey alloy wheels that have completely transformed the way the Fortuner looks. They say a good set of wheels can make or break any car, and with the new wheels on the Fortuner, Toyota have certainly gone in the right direction.

The Fortuner has always been a genuine seven seater and as you can imagine with a car this large, there is enough space for everyone. What we particularly like is how Toyota now gives the option of an all-black leather interior for those who want an edge of sportiness in their life. In fact, most new updates that have been made to the new Fortuner seem to be aimed at the slightly younger or young at heart buyer who wants something slightly sportier.

The dashboard hasn’t been changed but does come in black to compliment the interior and gets a nice black-wood insert that surrounds the infotainment system. The Fortuner also comes equipped with an electronically adjustable driver’s seat.

The 2015 Toyota Fortuner comes with a touch screen infotainment package. In fact, after just a couple of day’s use, we can definitively say that this is one of the easiest and most user friendly infotainment systems we have encountered in a long time. The infotainment system also naturally comes with Bluetooth connectivity and a USB and AUX slot. The Fortuner also comes two 12V charge sockets in the front and two more at the rear. The steering mounted audio control buttons too feel great and seem ergonomically placed. The Fortuner comes with very high levels of safety as well. Apart from airbags for the driver and passengers, driving aids like ABS and EBD add to safety factor.

Ride and ease of driving rating_3.5_rating

The Toyota Fortuner has always been the best car in its class when it comes to the way it rides. Most of this can be attributed to the double wishbone front suspension similar in layout to the Innova but beefy in build and revised to take in the all wheel drive capability plus also the larger wheels dictated by its SUV application. The Fortuner successfully overcomes the problem of bad roads by simply gliding over potholes and bumps like they never existed.

The Fortuner 4x4 Automatic is also a very easy car to drive mainly due to the fact the one sits so high up which in turn gives you a commanding view of the road. Being an automatic, it is of course much much easier to drive in rush hour traffic of a city like Mumbai or Delhi and also easy to drive off-road as we shall explain a bit later.

Slot the 5-speed automatic transmission into drive and put your foot flat down and the Fortuner feels like it could uproot a tree or move a mountain. The torrent of torque, all 343Nm of it is enough to propel this large SUV from 0-100kmph in 11.7 seconds. All this can be attributed to the 3.0-litre D-4D, turbocharged diesel engine that makes 171PS of peak power. This 16-valve twin overhead cam engine has an excellent torque spread and the variable geometry turbo aids in this smooth flow of power to all the wheels whenever one calls for it. At times the engine might sound noisy but there is no denying its might and willingness to whatever be the terrain you want tamed or conquered.

The 5-speed automatic in particular is smooth and doesn’t feel as lethargic as some of the other automatic SUVs in the same price bracket. In fact, the unit in the Fortuner is possibly the best on you can buy.

The Fortuner is never going to scorch the road with its handling prowess but it does have a trick up its sleeve….and a rather nifty one at that. The 2015 Toyota Fortuner comes with all the gadgets and gizmos one can expect from a serious off roader. You get locking diffs, a low range gearbox and all this with the ease of an automatic gearbox mixed into the package. The overall approach and departure angles makes it capable of tackling the worst boulder strewn roads or wading deep streams without in the least bit getting flustered. In fact it will make an ordinary driver feel like a Paris-Dakar pilot should he or she ever need to use the vehicle's impressive go-anywhere ability to get out of tricky situations or terrain.

The Fortuner makes do with ventilated discs up front but gets archaic drum brakes in the back and while the vehicle does come with ABS and EBD as standard equipment, disc brakes all around could have been so very welcome and even more effective for in the course of our testing we did find the brakes lose their bite and get spongy under repeated heavy hitting of the pedal.

Priced at Rs 27.82 lakh (ex-showroom, Delhi), the Toyota Fortuner certainly isn’t cheap. But then, it is a surprisingly interesting proposition when one looks at the other offerings in the segment. The Fortuner does goes up against the likes of the Mitsubishi Pajero Sport and SsangYong Rexton, however we think its real competition is in the form of the soon to be launched Ford Endeavour. According to ARAI test figures, the Toyota Fortuner 4x4 automatic returns 11.9kmpl which for a car that weighs 2000kg is quite impressive.

The new 2015 Toyota Fortuner 4x4 Automatic is what the Fortuner always should have been. Not only is this the perfect car for its segment, we expect the sales of this particular top of the line model to soon outshadow everything else in its segment. The Fortuner is big, brash, brutish and a pleasant departure from all the compact SUVs and cross hatchbacks that seem to have taken over the market. It has a good engine, is spacious, ridiculously easy to drive and offers unparallel road presence. The Toyota Fortuner 4x4 automatic is the quintessential SUV and to us, that is a good thing.