The Mercedes Benz CLA is the German car maker's most affordable sedan in India. But, it still manages to deliver a near complete luxury experience as our review reveals 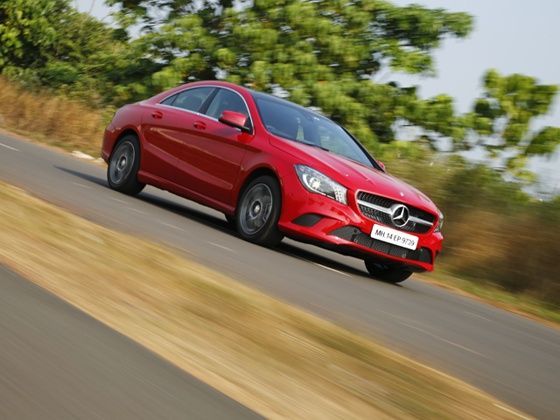 The Mercedes-Benz CLA-Class is the car maker's first salvo for 2015 in India; a year Mercedes feels will be its biggest in a long time. The CLA itself though, as you can tell, isn't all that big. And that's because it is underpinned by the same MFA platform as the A- and B-Class hatchbacks. It sits on the same wheelbase, has the same track lengths and is also only as tall as the A-Class hatchback. Not surprisingly then, the CLA will also be Mercedes' most affordable sedan in the country; the CBU route notwithstanding.

Size might not be the CLA's strong point, but its styling most definitely is. It isn't as arresting to look at from the front; its head lamps, grille and even the bumper to an extent do remind you of the A-Class. But in profile that Coupe like sloping down roof, the pronounced shoulder and sill lines, and those lovely looking 17 inch wheels give the CLA a unique road presence. And then there's that gorgeous rear with the twin tail pipes, the aggressively sketched bumper and curvaceous haunches lit by tastefully done LED tail lamps. We also couldn't get enough of those frameless doors; it just gives the Mercedes CLA a touch of class. The CLA then is without doubt one of the best looking sedans in the country today.

The same, however, cannot be said about the interiors of the Mercedes-Benz CLA. Now don't get us wrong, like any Mercedes of recent vintage, the quality, the fit and finish and the choice of materials, is all up to the mark. But then, there's just no originality here. It's all A-Class.

So, you have similar instrumentation, similar tablet like display stuck on the dashboard and of course similar overall design for the dash as well. The aviation inspired aircon vents are a carry over as well. The steering wheel, the centre console look and feel, and the use of silver accent on the dash, however, are all unique to the CLA.

As Far as space goes, the Mercedes CLA isn't a very spacious car and it's best used as a four seater. But, we won't term it as cramped. The curved back for the front sports seats liberate decent knee room for rear passengers and with just two seated at the back there's more than enough elbow room as well. But yes, the rear head room, given the CLA's coupe like roof line, is tight. The average Indian shouldn't have a problem but six footers are in for some discomfort.

Seats in the meantime give you very little to complain about. These are well contoured, well padded and high on comfort. And the ones at the rear, though not adjustable in any way, are still angled thoughtfully with comfort in mind.

The Mercedes CLA will come well equipped in all its avatars, which means things like sunroof, reversing camera, electrically adjustable memory seats and all the fancy safety bits - airbags, attention assist, ESP and the like - will all come as standard. As will the premium interior, the high-end sound system and the ambient lighting.

However, the petrol and diesel versions of the CLA are a little differently specced. The diesel for instance gets a digital two zone climate control system while the petrol makes do with a manual single zone unit. The diesel also gets rear AC vents which are missing on the petrol version. But otherwise, the two are pretty much at par.

There are two engines to choose from under the hood of the CLA. One petrol and one diesel. The 2-litre petrol is more for the enthusiast. The turbocharged, 4-cylinder unit develops 183PS of max power and can propel the Mercedes CLA from 0-100kmph in less than 8 seconds and onto a top speed of 235kmph.

The diesel, which is meant more for relaxed cruising, is the same 2.1-litre, 4-cylinder engine we have experienced on a whole range of Mercedes models in India. For the CLA, it is tuned to deliver 135PS and 300Nm. But the diesel is a noisy engine. It is noisy at start up, at idle and when when you rev it. One can also feel vibrations inside the cabin via the floor. The petrol on the other hand is quieter and more refined. It is also quicker and more involving to drive.

Ride and Ease of driving:

There is no significant difference in the ride quality of the two cars, however. But compared to other MFA based cars like the A- and B-class, the CLA is a big improvement. Mercedes has reworked the suspension setting to make it softer and as a result the ride is more pliant now and the CLA also rides undulations with a higher level of give making the overall experience quieter and more comfortable. But pronounced bumps still get the better of the car and there's still some thudding that the passengers have to live with. The visibility, meanwhile, is acceptable and the effort at the steering won't tire you out either.

The Mercedes Benz CLA isn't a very entertaining car to drive though. Sure, it has good straight line stability and it is wonderfully potent under braking. But around corners, it feels less taut. It rolls a bit, but not excessively. However, it is the understeer that's the real dampener. It sets in early and with the ESP on cuts power sooner that one would like. This is more pronounced on the diesel than the petrol powered CLA. Also, there isn't much that the steering offers in terms of feel further taking away from driver involvement.

The CLA with its engine options, its long standard feature list and good looks makes for a very compelling package. But it will come at a price; a price that will hover around the Rs 35 lakh mark. So it isn't going to be cheap by any stretch. As far as fuel efficiency goes, Mercedes claims the diesel returns just under 18kmpl under test conditions while the petrol's ARAI figure is rated at over 15kmpl. Both these figures are acceptable for a car that packs in so much stuff.

The Indian introduction of the Mercedes Benz CLA has been a highly anticipated one. The good news is, the CLA doesn't disappoint. It is good looking, well put together and premium and luxurious for its class. It's well specced too, and honestly, it isn't too bad a drive; the petrol for sure isn't. So, is it worth buying? Yes, it is! And should you also consider it over all else in the same price bracket? Well, now that's a difficult one because if it's value you want, there are clearly better options. But, if it's a badge you want to flaunt and feel good about, yes, the CLA is just the ticket.

Recommended Variant : CLA Class 200 CDI
Was this article helpful Yes No
Sorry about that