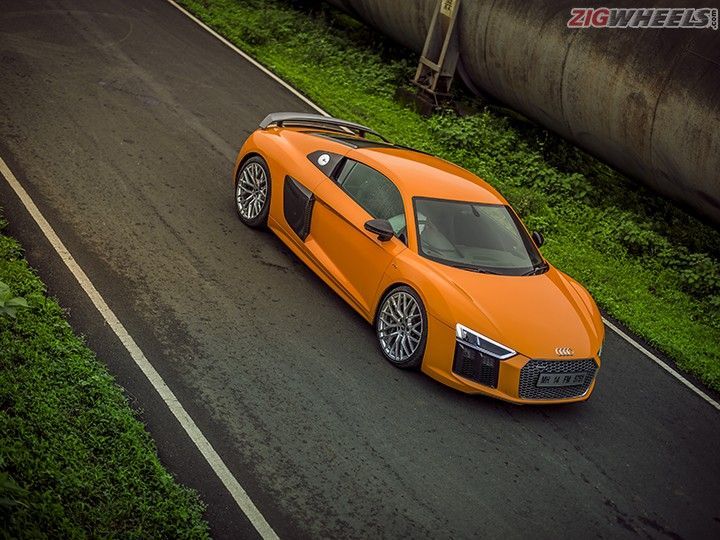 It's 4:30am, there’s still a few hours before the sun comes out, but I am wide awake already, and that even after barely being able to sleep the previous night. Not being a morning person, it was out of sheer excitement that I managed to pull this stunt, and the credit for it goes to the tangerine bombshell you see in these pictures here.

The original R8 was the car that proved to the world that Audi can make supercars, and make them well too. In fact, not many cars could match the all-round performance of an R8. Yes, it wasn't as aspirational as a Ferrari or a Lamborghini, but it sure as hell was a lot easier to live with. This second generation model is now here to further its predecessor’s legacy. Be warned, it has some pretty big shoes to fill.

Before you crank that engine and feel the supercar rush, it's the R8’s design that really sweeps you off your feet. Some might say that it looks almost identical to its predecessor, but I personally love the way the design has evolved to make the R8 feel new-age. Wherever we went the car managed to gather quite an audience wanting to take a selfie with the car.

The large grille reminiscent of the TT, sharper cuts all around, more carbon fibre bits and a chunky rear spoiler gives it the personality of a genuine supercar. The LED headlights sync well with the edgy front grille, the coupe roofline gives it an extremely smooth silhouette and then the low stance further adds to the aerodynamic appeal. While all of us at ZigWheels loved the way the new R8 looks, the only thing that stood out like a sore thumb were the alloys which we wish were gunmetal or piano black.

For a car that looks oh-so stunning on the outside, the interior is a bit of a disappointment. While it leaves little to complain about in terms of build quality and fit and finish, the décor is not as supercar-like as we would have preferred. The interior, including the dashboard, steering wheel, seats, and door panels are all washed in black. Of course there are the carbon fibre and brushed aluminium bits but they fail to make it feel as young and energetic as it is. Some contrast stitching and upholstery would have worked wonders in making it feel as sprightly on the inside as it is on the outside.

That said, there are some really cool bits inside the 2017 R8. Like the Ferraris and the Lamborghinis, the R8 too has a quite a few buttons on the steering wheel, including the start/stop button, controls for the drive select system and, to the delight of most supercar enthusiasts, a sports exhaust button. Behind the wheel, it gets what Audi calls a ‘Virtual Cockpit.’ The 12.3-inch TFT display doubles up as a central MMI monitor while performing the functions of a conventional instrumentation. We also loved the air-con vents with the integrated displays. But what really impressed us the most were the seats, which are surprisingly comfortable for a supercar and at the same time are well bolstered. We wish they were electrically adjustable, though. Nevertheless, it is exceedingly easy to find the right driving position. Time for us to take it for a ‘quick’ spin then!

One of the few things that this second-generation R8 retains from its predecessor is the 5.2-litre naturally aspirated V10 engine, and boy are we glad Audi did that, especially when the world is turning its attention to turbochargers. Much to the delight of purists, the R8 sounds like music to the ears and is highly responsive to inputs from the right foot. Thanks to the 610PS of peak power and maximum torque of 560Nm the new R8 reaches three-digit speeds before you even know it. To get a feel of how swift this Audi really is, I activated the launch control and gave it a go. The R8 shot ahead like a bullet out of a gun and to say that the car was quick on its heels would indeed be an understatement. In fact it's only when you look down at the speedo that you realise that you have already crossed the ton.

For the number crunchers, here's what the R8 can do: 0-100 in just 3.2 seconds and a top speed of 330kmph. Quite an eager beaver, we must say. Part of the credit also goes to the new aluminium chassis with carbon fibre-reinforced plastics, which reduces its weight by 15 per cent and yet increase the rigidity by 40 per cent. The beauty of the car is also in the fact that the engine and the seven-speed dual clutch transmission work in perfect harmony. The shifts are slick and it is an absolute delight to hear the car as it work through the gears.

Supercars can get a bit difficult to live with, especially with the state of roads in India. But the R8 has the makings of an everyday supercar. It is impressively comfortable for a car in this class, especially considering the razor-thin rubber it sits on. The ground clearance isn't bad either; we drove it in the city over some rough roads and were surprised to see the underside not scraping even once. While the R8 surely makes itself comfortable in the city, it comes into its element when pushed hard around corners. The Audi Quattro system ensures that the car is glued to the ground and takes a smooth line in and out of a corner. It's almost like a go-kart really (albeit a bit larger), staying flat around the bends with absolutely no body roll. That said, we would have liked a bit more directness in the steering feel, though.

With the R8, Audi has managed to get the unachievable amalgamation of stunning design, performance that does justice to the supercar tag, surprisingly impressive comfort, and great handling capabilities. The R8 always had the makings of an everyday supercar and in this 2017 iteration Audi has managed to better that equation. Besides, it shares a lot of its mechanicals with the Lamborghini Huracan and, at Rs 2.55 crore (ex-showroom Delhi), is almost Rs 90 lakh cheaper than its Italian sibling. Now to find a way to auction my kidney. Any takers?