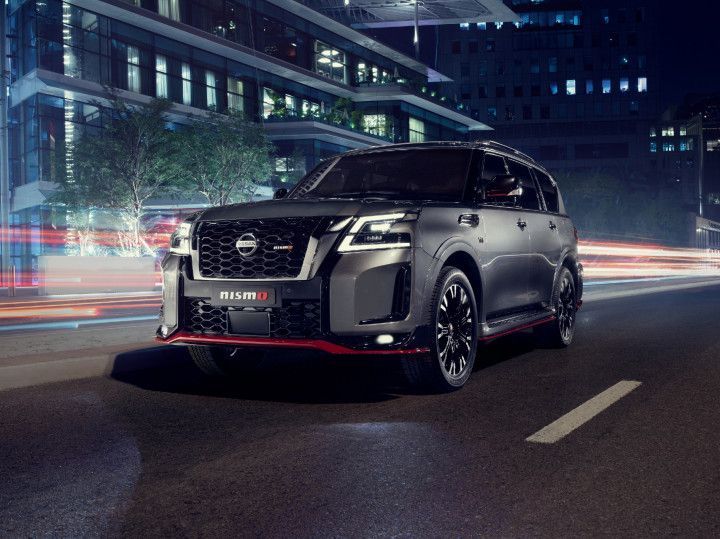 Even though the Nissan Patrol hasn’t made it to our shores, the full-size luxury SUV enjoys a legendary status in the Middle East. Now, Nissan has unleashed the Patrol Nismo, a performance-oriented version that comes with more power, sportier looks, and some serious upgrades underneath the skin.

The Patrol Nismo can’t be mistaken for anything, but a Patrol. That said, it comes with a honeycomb mesh grille and larger 22-inch alloy wheels. The rear fog lamp is similar to a Formula1 car and even emits the same amount of brightness! Then there’s the tastefully done red side skirt that runs all around the SUV. Nismo badges at the front and rear indicate it’s the sportier Patrol.

On the inside, the Patrol retains the same dashboard with a dual-screen setup. While it’s showing its age now (the sixth-gen Patrol is more than 11 years old!), Nissan has spruced up the interior with a red and black theme. The seats are draped in Alcantara with Nismo badging on the headrests.

Now, to the heart of the matter: the 5.6-litre naturally aspirated V8 petrol engine. It’s the same motor found in the standard Patrol, but manages to develop 28PS more at 428PS and 560Nm. It drives all four wheels via a 7-speed automatic transmission. The powertrain has also been tuned by Nissan's Takumi craftsmen team, a dedicated set of people that hand-built the GT-R’s engine.

The SUV also gets a host of updates underneath the skin for tied-down road manners. The alloy wheels are 4.5kg lighter than the standard model while the bilstein shock absorbers ensure sharper road manners.

The Patrol Nismo is priced at AED385,000 (Rs 76.98 lakh approx) and will go on sale in the Middle East in April. Don’t keep your hopes high as this Toyota Land Cruiser rival won’t be heading to our shores anytime soon.