Can We Expect A Special Edition Fortuner Like This Epic And Epic Black Edition?

These variants are only available with the 2.8-litre diesel version of the Fortuner 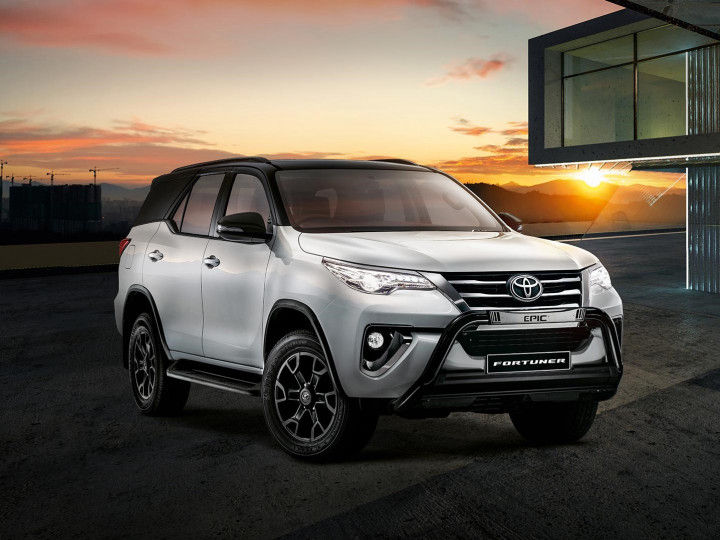 Toyota has unveiled two new special editions of the Fortuner dubbed the Epic and Epic Black. Before you jump the gun, we would like to report that these special editions were revealed far from home in South Africa. These variants are only available with the 2.8-litre diesel option and the changes are strictly cosmetic. Question is, can we expect something along similar lines here in India?

The cosmetic additions begin with ‘Epic’ branding on the front nudge bar, rear, and scuff plates. Toyota has also thrown in a tow bar as standard for both the variants. What you get with the Epic Black model is a dual-tone paint scheme (available in only Glacier White) with roof rails, black roof, black ORVMs, and 18-inch black alloy wheels. Inside the cabin, both the variants get branded floor mats and a powered tailgate for added convenience.

Apart from these changes, all other features and mechanicals have been carried forward. It continues to be powered by the 2.8-litre diesel engine which is also offered in India. This engine develops 177PS/450Nm and is married to a 6-speed automatic gearbox. Toyota also offers the smaller 2.4-litre diesel engine in South African markets. This is the same engine that powers the Toyota Innova Crysta in India. Petrol engine option is a 2.7-litre unit, which develops 165PS and 245Nm of twist. Both the variants are also available with a 4X4 option.

Now to address the elephant in the room. Toyota is highly unlikely to launch the same Epic and Epic Black editions in India. These are market-specific special variants, similar to the recently launched Innova Crysta Anniversary Edition. Toyota also gave us the Fortuner TRD Sportivo Edition back in September 2019. Meanwhile, our last brush with the Fortuner was when we found out that the BS6 version is priced from Rs 28.18 lakh to Rs 33.95 lakh.