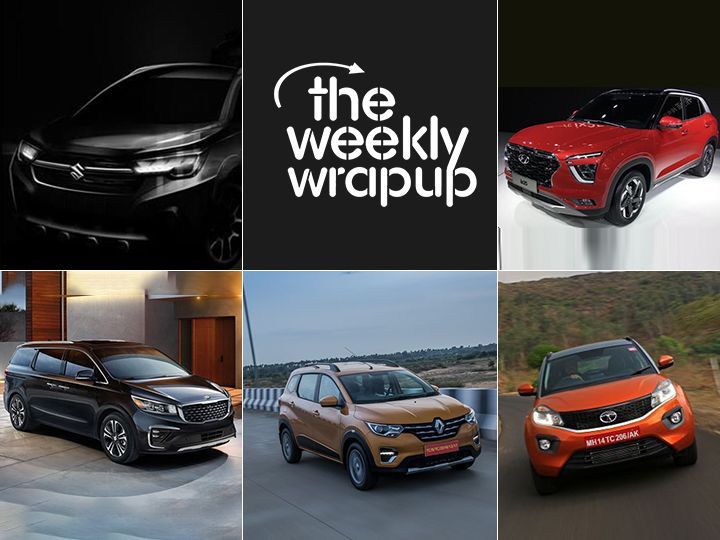 Over the past seven days, we saw a lot of action that was mainly dominated by SUVs and MPVs heading into a week full of launches. It kicked off with the Tata Nexon facelift being spied testing for the first time. It was then followed by Kia confirming the arrival of the Carnival MPV for the Indian market, along with Renault announcing the launch and bookings date for its new Triber mini MPV. Maruti Suzuki also revealed intricate details about its upcoming XL6 MPV with Hyundai also revealing details about the upcoming next-gen Creta to round off the week. Here’s all the headlines from the world of cars in the second week of August.

Tata Nexon Spied For The First Time In A Refresh Avatar:

Tata’s Nexon that debuted in 2017 is set to get a facelift as a camouflaged prototype has been spied testing for the first time. The spy pics reveal that the Nexon facelift will get a variety of cosmetic changes like redesigned front and rear bumpers along with revised headlights and new alloy wheels. Inside, it is expected to get upgrades along with additional connected features. The biggest change is expected to come under the hood with BS6-compliant engines powering the SUV. To know more about the Nexon facelift head here.

After the Seltos SUV, Kia has confirmed that its next product in India will be a premium MPV called the Carnival. It is set to compete against the Toyota Innova Crysta in the MPV segment. Notable highlights include power sliding doors, a 8-inch touchscreen with Apple CarPlay and Android Auto, a 7-inch instrument cluster, and more. Safety features on offer include blind spot detection, autonomous emergency braking, and lane departure warning. The Carnival is expected to come with 17-inch/18-inch wheel options in India. We expect the MPV to be powered by a 2.2-litre 202PS /440Nm diesel motor. Head here to know more about the expected launch date and how much it costs.

Renault Announces Launch And Booking Dates For The Triber:

Post its global reveal on June 19, Renault India has announced that the Triber mini MPV will launch on August 28th whereas bookings will commence from August 17. Bookings can be made online or at Renault dealerships at a token price of Rs 11,000. The Triber is pegged as a versatile and spacious mini MPV built on a new platform with a modular seating arrangement. The petrol powered MPV is adequately loaded with a host of creature comforts like a 7.9-inch touchscreen infotainment system with Android Auto and Apple CarPlay support and keyless entry with push-button start/stop. Head here to know more about the upcoming MPV.

With the launch of Maruti’s Ertiga based XL6 MPV just around the corner, the carmaker has revealed the variety of variants and colour options that will be on offer in the upcoming MPV. The XL6 will come in a total of four variants and six colour options to choose from. Some notable highlights of the MPV include a BS6 compliant 1.5-litre petrol motor with a 5-speed manual and 4-speed torque converter transmission option from the Ertiga. Other highlights include leather interior upholstery and a Smart infotainment system among other tidbits. To know more about the upcoming MPV, head here.

Hyundai has been prepping a second iteration of its successful Creta SUV for the Indian market. And now we know how it differs from its predecessor. The new Creta will be longer, wider and have its wheelbase identical to the Kia Seltos since it is based off it. As such it is also expected to get similar features to the Seltos on the inside including Hyundai’s Blue Link connected car tech. It will also share the 1.4-litre turbo petrol as well as the 1.5-litre petrol and diesel motors with the Seltos. Head here to know more about what’s new on the upcoming next-gen Creta SUV.