Skoda Enyaq iV’s Interior Is Made From PET Bottles! 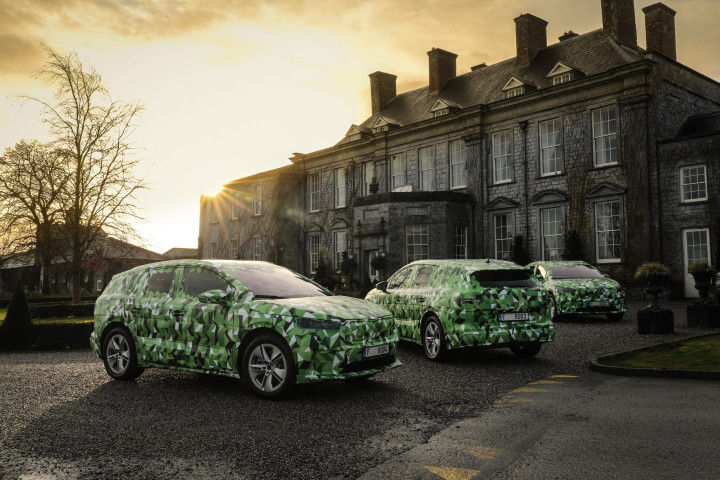 Skoda’s first-ever EV built from the ground up, the Enyaq iV, is set to make its global debut on September 1. The Czech carmaker has already revealed the exterior of the SUV, albeit of a pre-production version wearing Skoda’s green camouflage. Now, it has released the first sketch of the electric crossover’s interior, giving us a hint of the Enyaq iV’s dashboard design.

The Skoda Enyaq iV’s interior seems to have taken inspiration from the fourth-gen Octavia’s. The sketch reveals a 13-inch infotainment system that offers access to almost all of the controls mounted on top of the dash. Skoda states the middle section of the multilayer dashboard is inspired by the Czech brand’s butterfly grille. We also like Skoda’s unique two-spoke steering wheel and aircraft-style toggle switches beneath the AC vents.

The lower central console is practical thanks to the minimalistic drive selector, freeing up plenty of space. The middle occupant in the rear seat can also rejoice as the Enyaq will have a flat floor. It boasts a large 585-litre boot too.

Skoda has used natural and recycled materials in the interior of the Enyaq iV. The seat upholstery on select variants is made out of 40 percent wool while the rest is a blend of polyester from recycled PET bottles. Plenty of customisation options will be on offer with various predefined packages offering different themes and features. Some noted features in the Enyaq iV include an augmented reality head-up display, connected car technology, and cruise control.

Specifications and powertrain options of the Skoda Enyaq iV have already been revealed. The electric crossover will be offered with both rear-wheel drive and all-wheel drivetrains. Enthusiasts can also rejoice as there’ll be a souped up vRS variant on offer. Read more about it here.

Skoda’s first electric vehicle will debut on September 1 and when launched, it will lock horns with the Volkswagen ID.4. Sure, the Enyaq iV is highly unlikely to make its way to India. But a handful of those vRS versions could make us and Skoda enthusiasts happy. What say, Skoda?