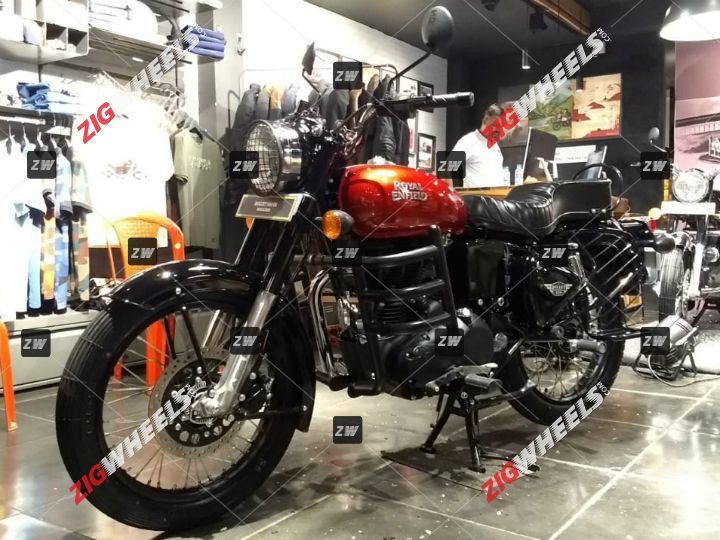 Royal Enfield launched more affordable versions of the Bullet 350 and Bullet 350 ES in order to target a wider audience and combat dwindling sales. Priced at Rs 1.12 lakh and Rs 1.26 lakh (ex-showroom, Delhi) respectively, the bikes are Rs 9,380 and Rs 8,921 cheaper than the standard Bullet 350 and electric-start variants. We’ve compiled different images of the bikes to give you a better idea of what’s changed and what hasn’t, along with the differences between the two bikes.

The biggest visual difference between the base and the standard version of the bikes is the paint scheme. The base variants of the Royal Enfield 350 gets a blacked-out theme with three new colours - silver, blue and black.

It’s a similar case with the Bullet 350 ES where you have three new shades to choose from -  Black, Regal Red, Royal Blue paint scheme.

The Bullet 350 gets cylinder and cylinder head painted in black while the slightly more premium ‘ES’ model features a complete matte-black engine casing.

The second biggest difference is branding. While the base model uses stickers on the tank, the ES variant features premium 3D logos.

In order to cut costs, both models miss out on the premium handmade pinstripes on the fuel tank and the 3D branding on the side quarter panels.

The chrome-plated wheels are replaced with black-rim spoked ones which are less expensive to manufacture.

The side boxes, turn-indicators, rearview mirrors and grab handles are also finished in black and complement the overall theme.

The instrument console remains unchanged, with the same analogue speedometer sitting smack in the centre of the console, flanked by tell-tale lights on the right-hand side and the key slot on the left.

Powering both the bikes is the same 346cc, air-cooled, single-cylinder motor that puts out 20PS of power at 5,250rpm and 28Nm of peak torque at 4,000rpm. It works in conjunction with a 5-speed gearbox.

Anchoring the bike is a single 280mm disc brake up front and a 153mm rear drum brake paired with single-channel ABS.

It carries over the same tyre setup as well, 19-inch ribbed pattern rubber upfront and block pattern tyres at the rear having a width of 3.25-inch each.