The Production-spec Kia Sonet Has Been Globally Unveiled!

Looks… check, features… check, engine options… check. Clearly, Kia has done all it could with the Sonet 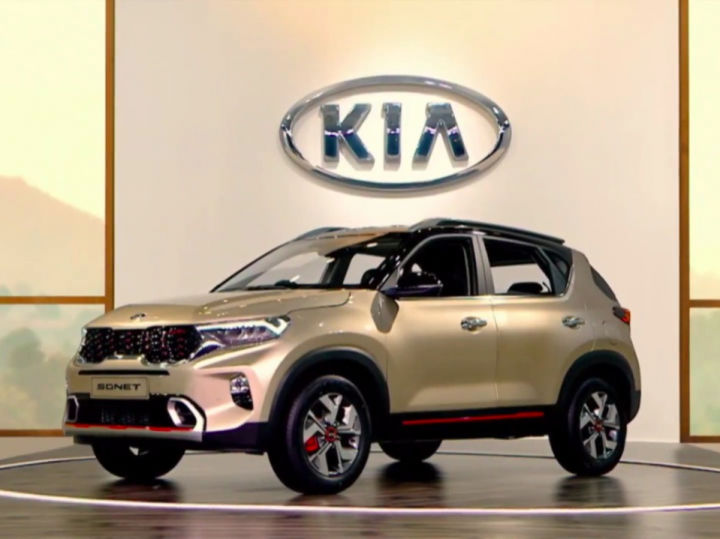 The production-spec Kia Sonet has been unveiled and we’re drooling over it. Kia’s third model in India sits in the hotly contested sub-4 metre SUV segment which has hot sellers like the Hyundai Venue and Tata Nexon. Yes, the Sonet won’t have an easy time here, but a glance at it shows that this Kia holds a lot of promise.

The Sonet is based on the Hyundai Venue and even expected to utilise the same engine options. That said, it carries its own styling and design elements and you'd have to look hard to make a connection with the Venue.

In fact, we’re happy to report that the Sonet’s design looks similar to the concept. The sharp ‘Tiger Nose’ grille along with sleek LED headlamps daytime running lamps complemented by the aggressively styled bumpers give the front-end a mean look. In profile, the squared-off wheel arches and the upright stance gives it an SUV-esque look. The body cladding and roof rails also add to the SUV quotient. At the rear, the Sonet’s connected LED tail lamps look quite similar to that of Audis.

Step inside the Sonet and you’ll notice that the dashboard seems familiar. That’s because the large 10.25-inch touchscreen infotainment system and the steering wheel is a straight lift from the Seltos. However, the Sonet gets unique bits like the funky semi-digital instrument cluster flanked by analogue dials and vertically stacked AC vents with knurled patterns.

Kia has left no stone unturned in the Sonet’s features department. It will come with UVO connected car technology, Android Auto and Apple CarPlay, a Bose sound system with a subwoofer, climate control, cruise control, a sunroof, ventilated front seats, automatic headlamps, and keyless entry with push button start. It will also get multiple driving and traction modes. On the safety front, it features six airbags, ABS with EBD, and rear parking sensors with a rear view camera.

You will also be spoilt for choices in the powertrain department. It comes with the familiar 1.2-litre petrol, a 1.0-litre turbo-petrol, and a 1.5-litre diesel engine option. The biggest addition here is that Kia will offer the diesel engine with a proper 6-speed torque converter automatic. Here’s a detailed look at their specs:

The Sonet will be offered in two broad trims: Tech Line and GT Line. The former takes a more elegant approach to its design while the latter adds a dose of sportiness with plenty of red inserts and GT Line badging inside-out.

The Sonet will take on biggies like the Ford Ecosport, Tata Nexon, Mahindra XUV300 and the Hyundai Venue. However, the final nail on the package is the pricing, which will be revealed next month during its launch. Stay tuned for updates on this front.