The new M4 Competition convertible also gets a host of firsts! 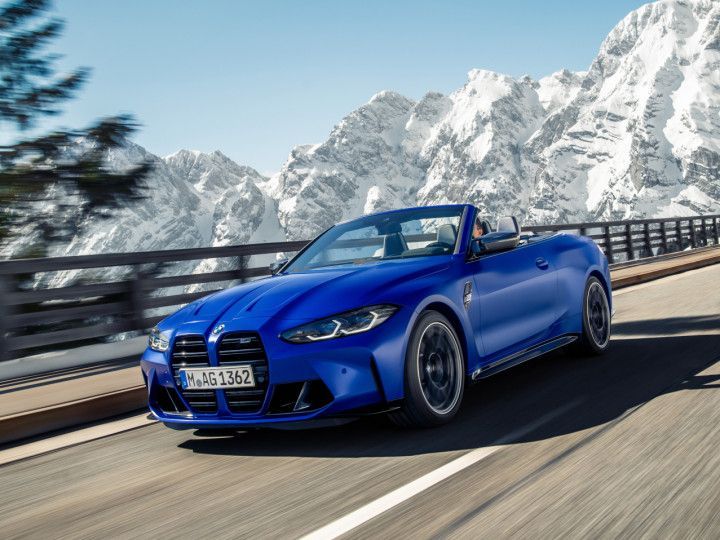 BMW has unveiled the Convertible body style of the new-generation M4 Competition. Slated for sale alongside the two-door coupe, it brings a host of firsts to the M4 convertible, as well as boasts quite a few improvements when compared to its predecessor.

The large kidney grille (which stirs up controversial opinions) is still there, but the sleek headlamps and the aggressively styled bumper gives the front profile a racy look. On the sides, the smooth flowing lines give it a clean stance while the 20-inch alloys and lowered ride height gives it a sporty appearance. The diffuser and quad exhausts livens up the smart looking rear.

On the inside, the M4 Competition convertible retains the same dashboard as the standard model, as expected. The sports seats up front and the M-steering wheel are present to ensure that you’re sitting inside a special car.

Thanks to the open top, you’ll now be able to hear the growl of the 3.0-litre in-line six-cylinder engine belting out 517PS of power, a whopping 60PS more than before, though the torque rating remains unchanged at 650Nm. For the first time ever, the M4 Competition is provided with an all-wheel drive system. The setup is rear biased and can be locked into pure rear-wheel drive mode for some fun on back roads.

An 8-speed automatic transmission comes as standard. That said, this author would prefer if BMW offered a stick shifter for a more involving drive. But with a 0-100kmph time of just 3.7 seconds, the exhilarating performance would suffice for most M4 customers.

Underneath the skin, the convertible gets a stiff suspension setup (compared to the M440i) and the improved torsional rigidity of  the chassis claims to result in sharper driving dynamics. There’s also the optional carbon ceramic brakes for better stopping power, as well as an M Race Track Package that adds bits like carbon ceramic brakes, bespoke M light-alloy wheels and M Carbon bucket seats, all of which reduces the overall weight by 25 kilograms.

The M4 Competition would lock horns with the Audi RS5 Sportback and the Mercedes-AMG C63 S. Considering the previous-gen model was on sale in India, we hope the new-gen models make it to our shores to satisfy the Bavarian manufacturers’ enthusiasts.