Maruti Suzuki At Auto Expo 2020: A Quick Wrap Up 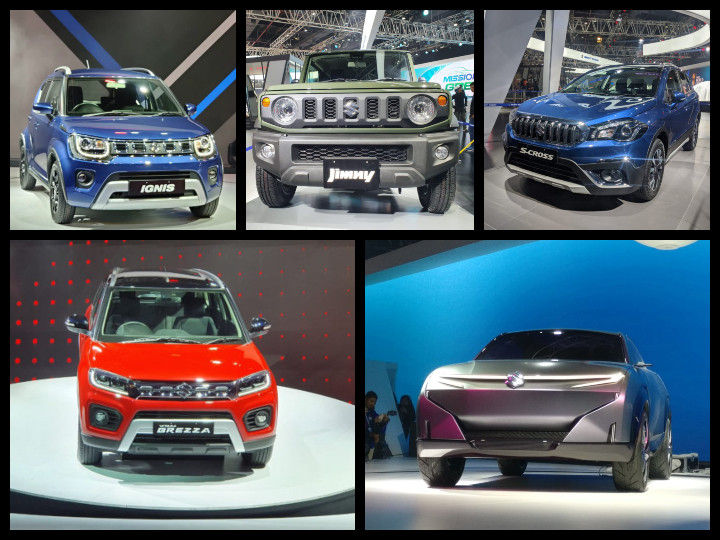 Maruti Suzuki, India’s largest car manufacturer, took the wraps off the Futuro-E electric concept SUV at Auto Expo 2020. We also got to see the unveiling of the Vitara Brezza petrol, BS6-compliant S-Cross and the Ignis facelift. Here’s more dope from Maruti Suzuki’s pavilion at Auto Expo 2020:

Maruti Suzuki’s Futuro-E electric concept SUV made its global debut at Auto Expo 2020. It previews the design for Maruti’s future mobility solutions. Technical specifications of Maruti’s concept SUV haven’t been revealed yet. However, it looks striking from certain angles thanks to its SUV-coupe silhouette. Have a closer look here.

Maruti Suzuki revealed the updated Ignis at the expo. It comes with a new front grille and larger faux skid plates on both bumpers. Apart from these changes, facelifted Ignis comes with a new upholstery design and an updated infotainment system. Powering the new Ignis is the BS6-compliant 1.2-litre K12B petrol engine developing 83PS and 113Nm. We expect it to be available with a 5-speed manual and AMT.

S-Cross Finally Gets A Petrol Heart:

Maruti Suzuki has taken the wraps off the S-Cross petrol at Auto Expo 2020. It comes with Maruti’s tried and tested 1.5-litre K15B petrol engine developing 105PS and 138Nm. Transmission options include a 5-speed manual and 4-speed automatic. This engine will also be offered with Maruti’s Smart Hybrid system for additional torque boost and start stop functionality. Expect the S-Cross petrol to hit showrooms soon.

Maruti Suzuki also showcased the Swift hybrid at Auto Expo 2020. Dubbed as the Strong Hybrid system, it utilises a 48v system. The Swift hybrid’s powertrain develops a combined output of 104PS and 148Nm. It’s capable of running on pure electric power and also features torque boost and start-stop features. Yes, the Swift hybrid could be launched in India by the end of 2020. Here’s a detailed specification comparison of Maruti’s Strong Hybrid and Mild Hybrid systems.

Maruti Suzuki also showcased the S-Presso CNG at Auto Expo 2020. While the manufacturer hasn’t revealed technical details yet, a leaked document has spilt the beans. The S-Presso CNG will continue to utilise the BS6-compliant 1.0-litre petrol engine. It develops 59PS in CNG mode and 68PS in petrol power. Expect the S-Presso CNG to hit showrooms soon.

Last but not the least, it’s the iconic Jimny. Maruti’s hardcore offroader was present at the Expo. Our sources have also confirmed that it will launch in the country in 2021. The Jimny is based on a tough body-on-ladder frame chassis and will most probably come as a 5-door version. It will be powered by Maruti’s tried and tested 105PS 1.5-litre K15B petrol engine. Naturally, it comes with an all-wheel drive system and low range gearbox as well.

Maruti also showcased the Ertiga, the Ciaz S and the Baleno at Auto Expo 2020. Which Maruti car caught your attention at the event? Let us know in the comments below.