It’s the base-spec variant of the second-gen Thar. But doesn’t that mean it loses on appeal? 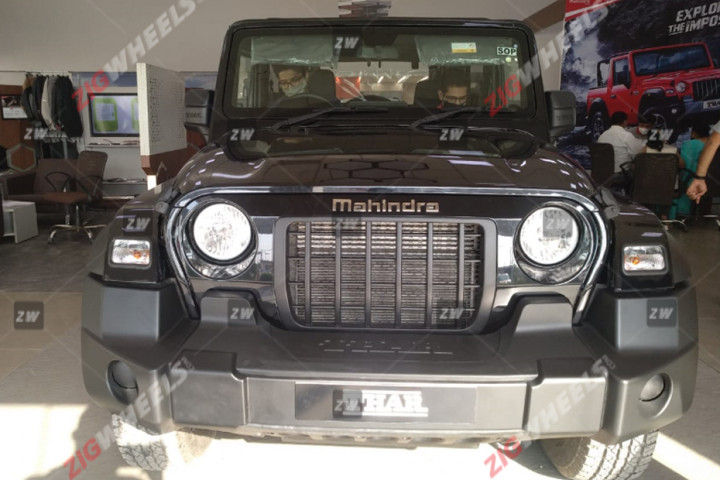 Mahindra’s second-gen Thar is off to a flying start, racking up more than 9,000 bookings since its October 2 launch. While the Thar LX with all the bells and whistles attracts the majority of the spotlight, the base-spec AX variant could suit those looking to customise their SUV and buying it primarily for off-roading. We have got shots of the barebones AX variants and it could be helpful if you’re deciding to pick up this variant.

How To Differentiate The Thar AX From The Outside?

Viewed head-on, the Thar AX looks similar to the top-spec LX variant. But the AX misses out on front fog lamps, which are limited to the higher variants. It also doesn’t have the dual-tone bumper. The silver finish on higher variants cuts the bulk and adds to its visual appeal to the off roader.

It’s easier to differentiate the variants from the side and rear as the Thar AX features 16-inch steel wheels with taller 245/75 profile tyres while the LX variant’s 255/65 R18 alloy wheels. Perfect for people who hit the beaten path frequently. The Thar AX is offered with a fixed soft-top only. The higher-spec AX Opt and LX can be had with either a fixed hard top or a cabriolet.

The LED tail lamps are similar to the top-spec variants with the ‘Thar’ insignia marked in them. Sweet!

Finer Details On The Inside

Step inside the Thar AX and it’s quite evident that you’re sitting in a base model. The touchscreen infotainment system, steering mounted audio controls, cruise control found in the top-spec variant have been omitted here.

The air-con controls are manual units instead of the electronic operated system found in the top-spec Thar. Note the power window switches to control the front power windows.

The only thing that looks similar to the top-spec Thar is the instrument console with the multi-info display. However, that is not a colour unit as seen on the top-spec LX variant.

Head over to the rear and the Thar AX comes with side facing seats for its rear occupants. These are not as safe or comfortable as the front facing seats found in the top-spec LX variant, especially in an accident. The seats in the base-spec variant comes draped in vinyl upholstery while the top-spec model utilises premium fabric and leather seats.

What Powers The Thar AX?

The Thar AX is offered with two engine options: a 130PS 2.2-litre mHawk diesel engine and a 150PS 2.0-litre mStallion turbo petrol engine. Both can be had with only a 6-speed manual gearbox in this variant. The 6-speed torque converter automatic is limited to the top-spec LX variant.

That said, these variants also come with a proper 4X4 drivetrain with a low range transfer case for some serious offroading. Watch our video to see how the new-gen Thar fares against the old one in its natural habitat.

Whom Do We Recommend This Variant For?

The Thar AX is priced in the range of Rs 9.80 lakh to Rs 10.85 lakh. (ex-showroom) Yes, it’s cheaper than the LX variant and that’s natural as it doesn’t come with any sort of features. But moreover, the new Thar’s starting price is cheaper than its predecessor, which was priced at Rs 9.99 lakh (ex-showroom). Sure, the new-gen Thar’s base variant price is a petrol and misses out on a mechanical locking differential, which was available in its diesel-powered predecessor.

But this particular variant is for those who love to customise their Thar with their favourite off-road based and comfort-based accessories. Moreover, it’s also the better option if you off-road frequently as there aren’t any fancy electronics on board and the steel wheels with taller profile tyres can take much more beating.