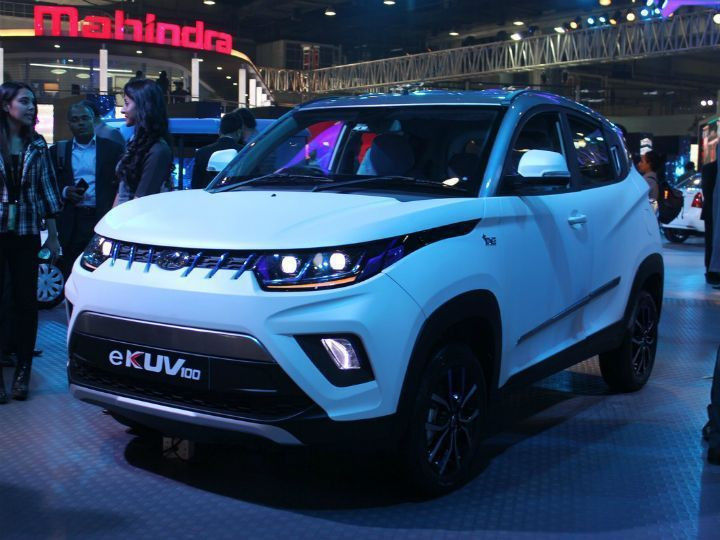 Mahindra is set for a very busy start to 2020 with a slew of launches expected at Auto Expo 2020. These include 18 new vehicles ranging from EVs and facelifts to next-gen iterations of current models. The theme for the carmaker is #DrivenbyPurpose, which will showcase sustainable mobility solutions. The carmaker will also reveal their BS6 lineup ahead of the April deadline. Here are all the models that Mahindra could bring to the expo:

While it hasn’t been long since the TUV300 got a facelift back in 2019, Mahindra is already working on its next iteration, as evidenced by spy shots. It is expected to feature a revised front end with minor revisions to the overall exterior. Interiors are likely to remain similar with modern additions. It could retain its 1.5-litre diesel engine, albeit with a BS6 upgrade. Expect the 5-speed manual gearbox and rear wheel drive to be retained, however the carmaker could bring back the AMT option that was scrapped earlier in 2019. It is likely to be launched later in the year at a premium over its predecessor owing to its upgrades.

Considering the rapid proliferation of EVs in India, Mahindra will also debut the all-electric iteration of the Mahindra XUV300 spied testing in India last March. Details are scarce, but the XUV300 Electric is likely to get a 132PS electric motor, juiced up by a 40kWh battery, with a range of more than 300km. It's likely that the XUV300 will launch later in the year going up against the Nexon EV.

Another EV from Mahindra at the expo is the all-electric version of the KUV100. It already made its debut at Auto Expo 2018, but it hasn't been launched yet. Now that EVs are entering the mainstream, we expect that to happen. Mahindra claims a travel range of 140km and fast-charging capabilities that can juice the car up from 0-80 percent in less than an hour. It is likely to be priced from Rs 10 lakh (ex-showroom) onwards, making it one of the lest expensive EVs in India.

Another EV on the list is the ATOM mini three-seater that was also showcased at Auto Expo 2018. It looks more like one of those battery-powered toy cars that keeps your kids occupied while you go shopping at the mall!

Aside from production vehicles, Mahindra will also showcase some wacky concepts at the expo. These include the Stinger, which is essentially a drop top TUV300, as well as the UDO concept. The carmaker will also showcase an all-new futuristic concept.
2020 Mahindra Scorpio

Next up is the next iteration of one of the car maker's most successful model, the Scorpio. It has been spied testing in India multiple times, revealing a similar design to its predecessor, but bigger than before. Under the hood, we expect the new Scorpio to be powered by a new BS6-compliant 2.0-litre diesel engine mated to an automatic gearbox and all-wheel drive. It is likely to be launched shortly after its slated debut at Auto Expo 2020. Once launched, it will take on the likes of the Hyundai Creta, Renault Duster and the Tata Safari Storme. Prices are likely to start at a premium over its predecessor.

Another next-gen model expected from the carmaker is the 2020 Mahindra XUV500 that has been spied inside and out. While the heavy camo doesn’t reveal a lot of the design, we know it will get a redesign. Exterior highlights include, a more upright nose, redesigned tail gate, flush fitting door handles and a bulge on the C-pillar. The SUV will also get reworked interiors with bits like a central touchscreen infotainment system joining the instrument cluster, lower AC vents and a three-spoke steering wheel. Under the hood, powertrain options are likely to be BS6-compliant 2.0-litre petrol and diesel engines, mated to a 6-speed manual and automatic gearbox as well as all-wheel drive options. Expect a launch later in the year with a premium over its predecessor, owing to the upgrades. It could take on the likes of the 6/7 seater MG Hector and the upcoming Tata Gravitas.

Mahindra could also head into more rugged territory at Auto Expo 2020 with the second generation Thar. LLatest spy shots suggest that the carmaker is addressing the biggest issue that plagued its predecessor: the basic interior design. The test mule’s interior was spotted with features like a touchscreen infotainment system, steering-mounted controls, front power windows as well as automatic climate control. Exterior spy shots reveal a similar yet larger design. It is likely to be powered by a 2.0-litre BS6-compliant diesel engine with a 6-speed manual gearbox and four-wheel drive. We could also have a petrol variant alongside an automatic gearbox. It is likely to be priced at a premium over the Thar 700 once launched in India. Expect the new Thar to take on the Force Gurkha.