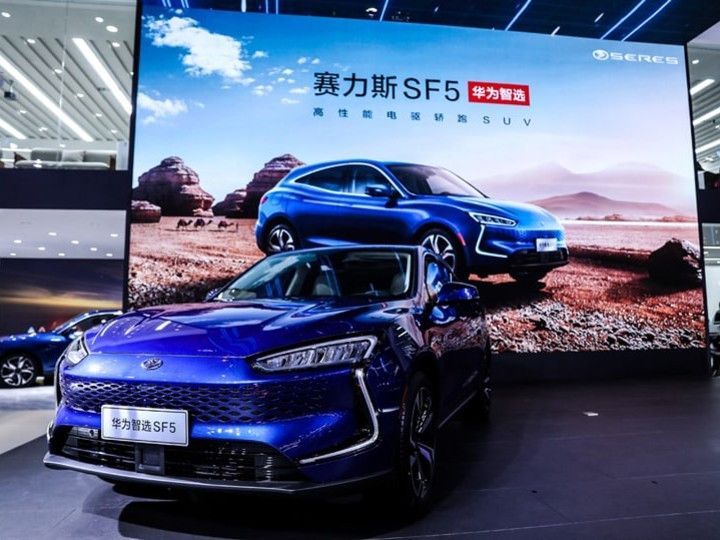 There were reports last month that tech giant Huawei was in talks with a couple of Chinese manufacturers to introduce its own range of vehicles. Well that’s now a reality, as the SERES SF5 has been showcased at Auto Shanghai 2021, and is on sale at all Huawei stores across China.

Technically, it’s not completely developed by Huawei, as they’ve tied up with Chinese carmaker SERES. The crossover SUV was already revealed in China back in 2019. So the model marketed by Huawei is an updated model. Technicalities aside, we can still count it as Huawei’s first foray into the electric vehicle segment.

The main talking point for the SF5 is under the hood, running a similar setup like the Nissan ePower powertrain. Basically, the SF5 has a 1.5-litre engine that acts as a generator that charges the battery pack that provides propulsion to the electric motor. It’s also no slouch off the line with a 0-100kmph sprint in just 4.68 seconds. Combine that with the lightweight aluminum chassis, double- wishbone front suspension and the trapezoidal multi-link rear suspension, and the crossover SUV could be pretty handy around corners .

Huawei’s yet to spill the beans on the SF5’s detailed specifications, but it will be offered with 2WD and 4WD drivetrains. They’ve also boasted a claimed range of upto 180km running on pure electric propulsion. Combine that with the 1.5-litre engine, and the range can extend over 1,000km.

We also noticed a really cool feature in the SF5 called the vehicle-to-vehicle (V2V) rescue recharge mode. Basically, you can provide emergency power to isolated vehicles. It can also act as a power supply to induction cookers, stereos, and other equipment thanks to the vehicle-to-load power supply mode.

As for how it looks, the SF5 has all the necessary proportions to make it a crossover. A nice highlight is the L-shaped DRL that flows nicely from the corner of the headlights to the air vents. Huawei’s influence is clear on the inside, with features such as Huawei HiCar connected car tech in which you can turn on climate control via voice control. It also comes with a Huawei Sound-tuned 11-speaker audio system, as well as ventilated and heated front seats with massage function.

It is offered in four body shades: Blue, Black, White and Grey. with black, red and white interior trim options. It retails at around Rs 25.20 lakh (2WD) and Rs 28.68 lakh(4WD) in China. If you thought Huawei is the only tech giant looking to enter the automotive space, well prepare to have an influx of them pretty soon. Apple seems close to joining hands with LG-Magna for it’s self-driven EV, and Xiaomi has announced its expansion into the EV sector with plans to invest upto USD 10 billion over the next 10 years.