The fifth-gen City is larger and packs more features, all at an attractive price tag, but is that enough to take on its well-established rivals? Let’s find out 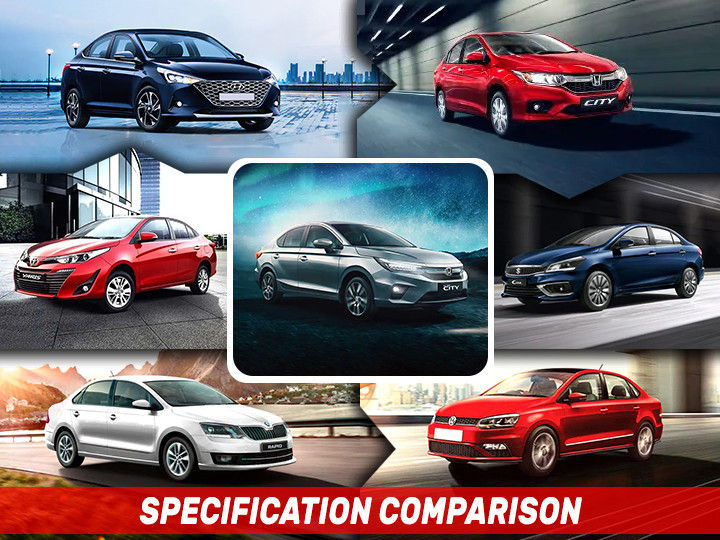 Honda Cars India has just launched the fifth-gen City at a starting price of Rs 10.90 lakh (ex-showroom). The City aims to reclaim the top spot with its large dimensions and lengthy feature list but how does it fare against its rivals: the Hyundai Verna, Maruti Suzuki Ciaz, Skoda Rapid, VW Vento and Toyota Yaris. The fifth-gen City also has to face the fourth-gen model, which will be sold alongside. Let’s see how the new City fares against its well-established rivals:

The fifth-gen Honda City is the longest and widest car in the segment. However, the fourth-gen City and Toyota Yaris are the tallest while the Ciaz has the longest wheelbase. Meanwhile, the Hyundai Verna plays the middle ground here while the Skoda and VW twins are the smallest in almost all aspects.

In terms of boot space, the fourth-gen City and Ciaz top the list here followed by the fifth-gen City, Toyota Yaris and the Skoda Rapid. Hyundai and VW haven’t revealed the boot space of their cars.

Common features on all cars include touchscreen infotainment, cruise control, climate control and keyless entry. While all cars feature Apple CarPlay and Android Auto, only the lower-spec variants of the Rapid get this much valuable feature. The top-spec Monte Carlo gets an Android head unit which doesn’t feel intuitive to use.

Overall, the fifth-gen City comes with a decent feature list. However, the Verna pimps it with a wireless phone charger and ventilated front seats. The Volkswagen and Skoda twins, though equipped with essentials, miss out some niceties like push button start and automatic headlamps. Both these cars are the least equipped here.

On the safety front, all cars come with a minimum of two airbags, ABS with EBD, and rear parking sensors with a rearview camera. The fifth-gen City, Verna, Yaris and the automatic variants of the Ciaz feature electronic stability control while the first three also come with a tyre pressure monitoring system. The Yaris is also the only car to come with seven airbags. Kudos Toyota!

Overall, the fifth-gen City, fourth-gen City, Verna and Yaris come with a decent amount of safety features while the other three have their bases covered.

*will be introduced in Rapid soon

The fifth-gen City’s 1.5-litre i-VTEC develops the most amount of power, closely followed by the Verna Turbo and fourth-gen City. Though the City’s torque figure is amongst the least here. The torquiest cars in this test are the Skoda Rapid, VW Vento and Hyundai Verna Turbo. Overall, the Ciaz and Yaris develop the least amount of power and torque while the naturally aspirated Verna takes the middle ground.

The Ciaz is the most fuel efficient in this test followed by the Verna Turbo, Skoda Rapid, fifth-gen City, Verna NA petrol, fourth-gen City, Vento and Yaris.

The fifth-gen Honda City and the Hyundai Verna are the only models in the segment that come with diesel powertrains. Both of them come with a 1.5-litre engine and a 6-speed manual transmission. However, Hyundai's CRDI engine is more powerful than Honda's unit. The Verna is also offered with a 6-speed torque converter, giving it an advantage over the City.

In terms of fuel efficiency, the City’s 24.1kmpl figure is 0.9kmpl lower than the Hyundai Verna MT. The Verna AT returns 23.1kmpl.

Yes, the fifth-gen Honda City is the most expensive car in its segment. But, it tries to justify it with an extra-long feature list, a free-revving i-VTEC petrol engine and a premium design. Even the base-spec V variant comes loaded with a good amount of features to satisfy the common man. But if you’re looking for a better value-for-money package, you may want to consider the Verna which comes with a recent cosmetic update and is loaded with features. For a more fair perspective, we’ll be pitching all these cars back to back in a comparison test. So stay tuned for updates.