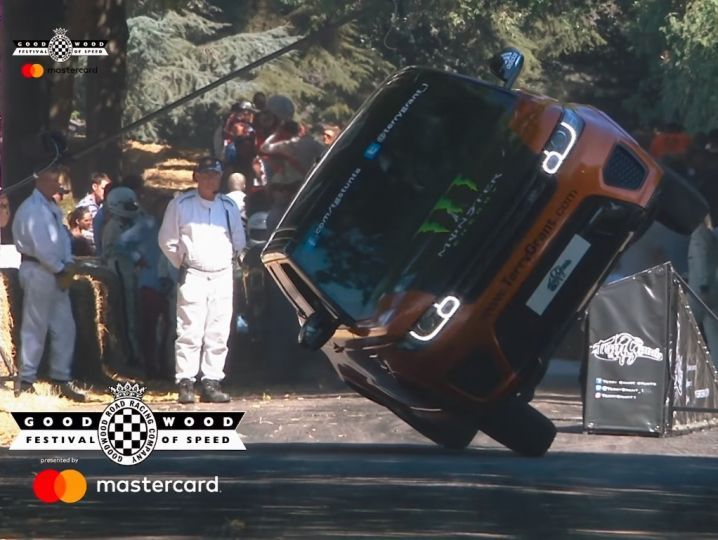 If you like car stunts, then it’s quite possible that you’ve heard of Terry Grant. Yes, that bloke who loves to drive cars on two wheels. Back in 2011, he set a Guinness World Record for the fastest mile completed by a car on two wheels by going up the famous Goodwood Hillclimb in a Nissan Juke in just 2 minutes and 55 seconds.

Later, he returned in 2015 to try and break his record with a Nissan Juke RS Nismo, in which he finished the course 45 seconds faster than his earlier run. For some unknown reason, however, this run could not be entered into the Guinness World Record.

So, he returned in 2017 with a Range Rover Sport SVR. However, he did not cover the full length of the hill climb. But in 2018, he meant business. Having failed twice the day before and then having a mishap on the first run the next day, Terry set off again to set a new world record. Take a look for yourself in the video below.

Impressive, right? Terry completed this run in an impressive 2 minutes 24.5 seconds. Although this run is not on par with the time set in the Nissan Juke RS Nismo, it was good enough to set a new Guinness World Record.

This is not the only world record under Terry's belt. He partnered with Jaguar to create the world record of the largest loop-the-loop in a car with the F-Pace and the world's farthest barrel roll in the E-Pace. He also has the fastest time to do 10 donuts (spins) in car, fastest time to change a wheel on a spinning car, narrowest J-Turn and a lot more to his credit. Wouldn’t it be interesting to see what Terry does next? Any guesses?