The upcoming compact SUV will be launched on August 22 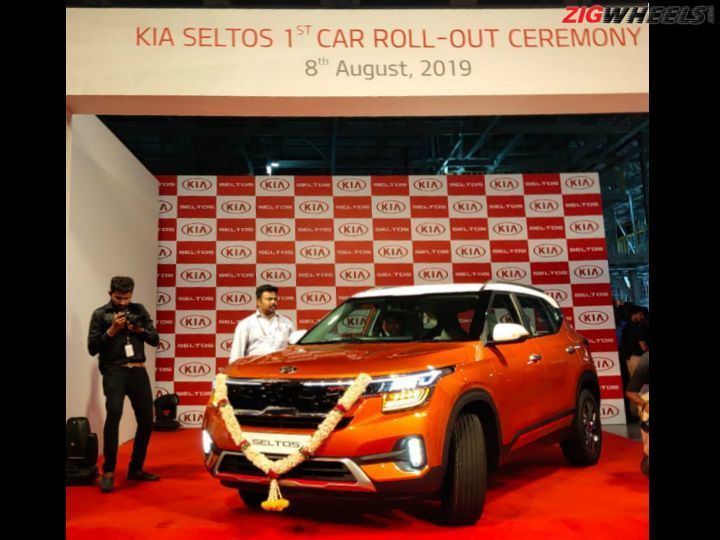 The Seltos could be one of those unicorn products which gets everything right from the word go. What we already know points at a potential segment disruptor and a worthy flag-bearer to kickstart Kia’s operations in India. With the launch just around the corner, Kia has begun manufacturing the SUV at its Anantapur facility in Andhra Pradesh and the car in the images right here is the first Seltos to roll out of the assembly line.

Kia's newly established facility has an annual output of 3 lakh cars and with the Seltos, the carmaker has attained localisation levels of upto 90 per cent. Deliveries of the compact SUV will also start on the day of launch. The Seltos in India comes with three engine and four transmission options. It’s been a while since Kia started accepting bookings for the SUV and the carmaker has now announced that it received over 23,000 bookings in 20 days.

The 1.5-litre naturally aspirated petrol engine develops 115PS and 144Nm while the 1.4-litre Turbo GDI petrol motor is good for 140PS and 242Nm. The diesel engine, meanwhile makes  115PS and 250Nm. Transmission choices on offer are a 6-speed manual gearbox, CVT, a 6-speed torque converter as well as a first-in-segment 7-speed DCT. The 1.5-litre NA petrol does the 0-100 kmph time in 11.8 seconds while the diesel does it in 11.5 seconds. The T-GDI Seltos is the fastest of the lot with a claimed time of 9.7 seconds.

The Seltos will be available in two trim options -- GT Line and Tech Line. It comes loaded with impressive kit like a 10.25-inch infotainment system, an 8-inch HUD, automatic climate control and an 8-speaker Bose sound system. It also gets an air purifier, ventilated seats, Sound Mood lighting and a plethora of connected car tech that goes by the name UVO Connect.

The Kia Seltos is slated to launch on August 22 with prices expected to begin from Rs 10 lakh and go up to Rs 16 lakh (ex-showroom pan-India). The Seltos will face rivals such as the Hyundai Creta, Tata Harrier and the MG Hector.