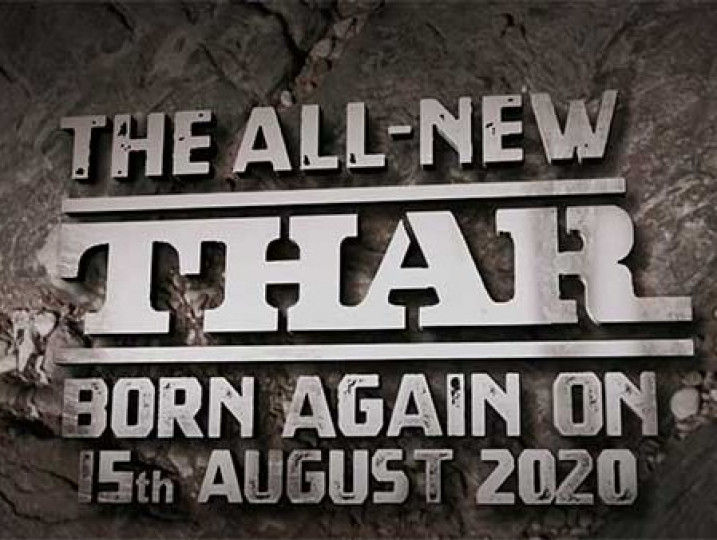 The wait for the 2020 Thar is finally over. After much anticipation, Mahindra has settled on a reveal date for the Thar: August 15. The Indian carmaker has some exciting plans to celebrate the 73rd Independence Day of India and boy, are we relieved. So without further ado, here are five key points you should know about the Thar:

Although the Thar retains its trademark design elements that distinguish it from your average SUVs, significant changes have been made. The slatted grille is still there, but on a larger and wider body, thanks to the new platform. Then there are LED DRLs mounted on top of those XXL-sized wheel arches a la the Jeep Wrangler. Speaking of XXL-sized wheel arches, the Thar is likely to use 17-inch wheels from the Scorpio which fills them up nicely. The Thar, for the first time, will get a factory-fitted removable hard top. So you can open it up to give it that utilitarian look.

No Longer A Barebones SUV

Compared to its predecessors, the interior of the new Thar is set to get a bunch of upgrades. From the looks of it, gone are the uncomfortable seats and instead, you get plush upholstery. The dash itself gets some new features, debunking the whole ‘Thar is a barebones off-road SUV’ stereotype. We hope quality levels have also taken a step up.

‘Features’ Is The Name Of The Game

Not Just A Diesel SUV Anymore

In another first for the SUV, it will get the option of a 190PS 2.0-litre mStallion petrol engine alongside the 140PS 2.2-litre mHawk diesel unit. Gearbox options consist of a 6-speed manual and automatic transmission. Both variants are likely to be offered with a 4X4 drivetrain. Ready to go mucking?

But At What Cost?

Mahindra has done a good job in ensuring that the 2020 Thar appeals to a wider customer base. Make no mistake, the Thar is not losing out on its off-road credentials, but it now has an added family car appeal. It is expected to be priced above Rs 10 lakh (ex-showroom) and will lock horns with the Force Gurkha and the upcoming Maruti Suzuki Jimny.