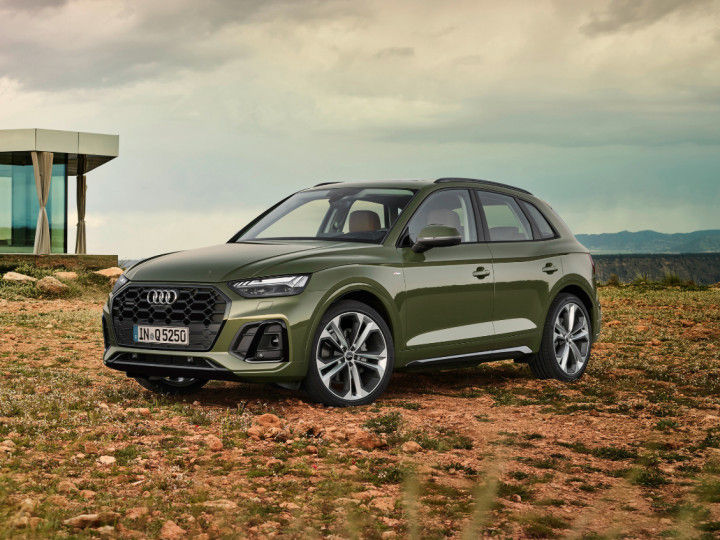 Audi has taken the wraps off the facelifted Q5 and this is the first update for the second-gen mid-size luxury SUV. It gets a design refresh, more technology and a cleaner 2.0-litre TDI diesel engine with mild-hybrid technology. Here are five things that are new in the facelifted 2021 Audi Q5:

Most of the design changes are at the front and the Q5 has traded in its elegant design for a sportier appearance. We’re sure enthusiasts will appreciate this. The large single-piece Audi grille is sharper and features sportier honeycomb detailing. And we particularly like the snazzy new LED DRLs that do a dance while locking and unlocking the car. Sweet! Also new is the bumper which gets sportier details.

Apart from the new alloy wheels and the OLED tail lamps, the side profile and rear-end of the Q5 look similar to the current model. The OLED tail lamps, which is a world-first, need a separate mention. It’s split into three tiles and six segments, allowing the designer to create different designs and signatures. For instance, if you shift to Sport mode, the design signature changes to indicate that selected mode. It also comes with a proximity sensor, lighting up completely when a user approaches closer to the Q5. Quite cool!

Inside, the facelifted Q5’s dashboard is similar to the pre-facelift model and it doesn’t feature the modern twin-dashboard setup found in its larger siblings. That said, Audi has refreshed it with more tech on board. For starters, the 10.1-inch infotainment system features Audi’s latest version of the MMI system and can be controlled by touch inputs or voice commands. Even the virtual cockpit has received an upgrade and features three different graphic layouts.

Thanks to the addition of connected car tech, the facelifted Audi Q5 packs in functions like Amazon’s Alexa virtual assistant and online navigation. One can also upgrade the infotainment system and add paid features via MyAudi App on your smartphone. Other highlights include optional adaptive air suspension, tri-zone climate control, cruise control, ambient lighting, a wireless phone charger, powered front seats and a premium sound system.

The Euro-spec 2021 Audi Q5 will initially be offered with a revised 2.0-litre diesel engine that develops 204PS of power and 400Nm of torque. It comes paired with a 12V mild-hybrid system, enabling the engine to shut off while coasting at speeds below 22kmph. Power is sent to all four wheels via a 7-speed automatic gearbox. The Q5 is also quick, with 0-100kmph coming up in 7.6 seconds. Press on further and it maxes out at 222kmph.

A 2.0-litre TSI petrol engine, a 3.0-litre TDI V6 diesel engine and a plug-in hybrid variant will be offered at a later stage. Expect the India-spec facelifted Q5 to be offered with a petrol engine as Audi will take the petrol-only/electric route in the BS6 era.

The facelifted Audi Q5 is expected to reach our shores by early 2021. One can expect prices to start from Rs 55 lakh mark (ex-showroom), putting it right in the ballpark of the Mercedes-Benz GLC and BMW X3.