Honda City Vs Hyundai Verna: Which Of The Upcoming Updates Is Better? 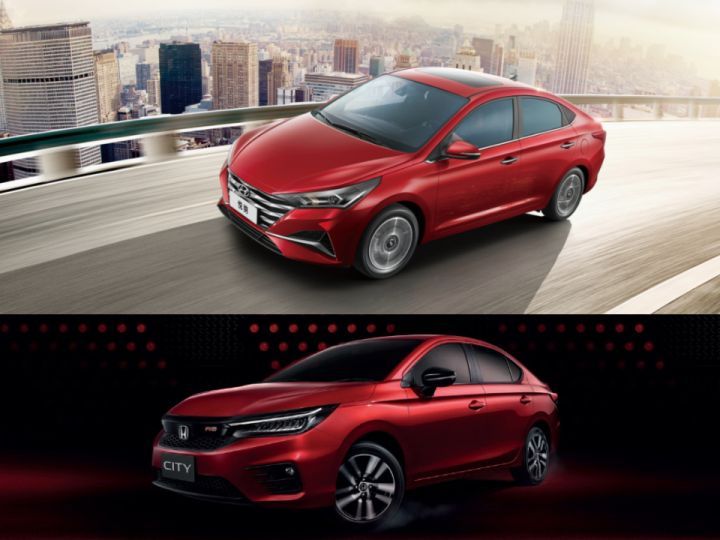 The Honda City and Hyundai Verna are closely matched in terms of sales numbers in India, but both cars have taken a hit amid the ongoing automotive slump. With sport utility vehicles (SUVs) taking over sedans in the Indian market, the future looks bleak for ‘proper’ sedans, which are not just sub-4-metre hatchback incarnations. Just across the border, Hyundai has recently launched a new car, which barring a few changes, could be the new Verna for India. In addition, Honda globally unveiled the City sedan in Thailand. It is bigger and promises to be better than the outgoing model. Read our comparison of the current-generation cars here. We reckon the 2020 cars will be launched in India sometime next year, but we’ve compiled a few details to give you an idea of what you can expect:

The Verna’s front fascia resembles the Santa Fe, but walk to the rear end and all ‘brand recognition’ is thrown to the wind. It looks like no other Hyundai model including its predecessor. Barring the polarising rear end, the new car is instantly recognisable as a Verna. Besides, the rear is not something you’d see if you own and drive the new car since you’ll be sitting in the driver’s seat and looking at the plush new dashboard. A layered design and softer materials contrast with piano black trim bits to transform the Verna’s already lovable interior furnishings. The curvier, less straight-edged aesthetic of the exterior is present here as well.

Look at the 2020 Honda City’s front and if you’re not wearing your glasses, you might think it’s a Civic. The new grille and headlamp layout takes a lot from the new Civic. In keeping with Honda’s tradition of introducing a completely different aesthetic with each new generation, it bears little resemblance to its predecessor.

But this design has a flaw too -- the C-pillar. It is boxy and the slope of the roof isn’t as aggressive as the Verna, so it ends up looking a lot like the Amaze’s C-pillar. But you have to look at the City from a particular angle to see it. On the inside, the City takes a more conventional approach, using its added width to provide a spacious dashboard, which sits lower than before. The new steering wheel has pistol grips too. One feature that both cars have is fake vents in the rear bumper.

The Verna comes with the same safety features, but adds a tyre pressure monitoring system to the mix. For an extra CNY 4,000 (Rs 40,600), you can get active safety features on the China-spec Verna. This includes forward collision avoidance, lane keeping assist, lane departure warning, and automatic adjustment for high and low beams. Another optional extra is the sunroof. The Verna, too, gets an 8-inch touchscreen, but the audio system only gets 4 speakers from the factory.

The new City is bigger than the old one -- wider, and longer. Its height has been reduced by 10mm, too. New styling changes give it a wider, lower look. The upcoming City is larger than the Verna, though its wheelbase is a tad shorter than the Hyundai. Although we don't have a number for the City's boot capacity, it is worth noting that the previous generation had a bigger boot than the Verna. Both cars are commodious enough for a set of full-sized airport bags and some carry-ons.

In India, Honda could retain the City’s 1.5-litre diesel and petrol engines, and the Verna could get the 1.5-litre BS6 engines from the Kia Seltos. But in Thailand and China respectively, these are the powertrains that both cars get:

We haven't been introduced to the 1.0-litre VTEC turbo from Honda yet, and the engine is all-new for Thailand. It makes more power and torque than the 1.5-litre engine we have in India. The Verna, however, comes mated to a powertrain that's familiar to us -- that's the same 1.4-litre Kappa Dual VTVT engine which powers the base-spec, current-gen Verna.