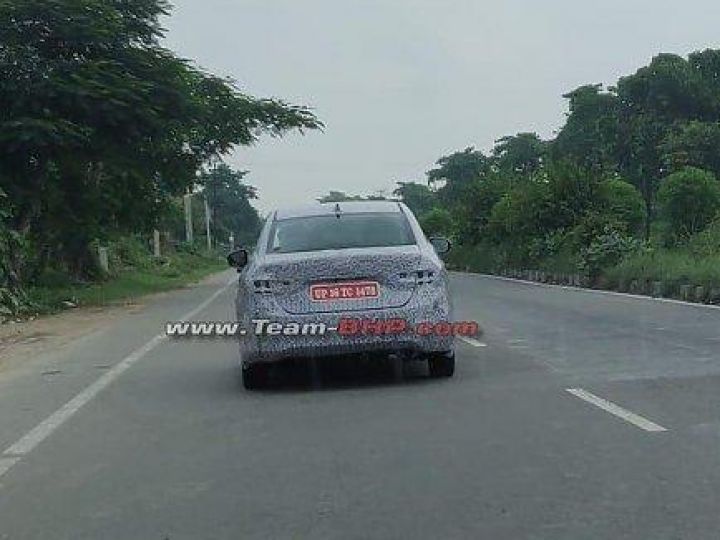 The next-generation of Honda’s best-selling sedan was spotted on test in India. The pictures have surfaced after a mere three months after it was first spied in Thailand. Compare the two cars in the pictures, and you’d quickly deduce that the car looks pretty much unchanged.

Like the car spotted abroad, this mule too, seems to be longer and wider than the existing City. It retains it’s conventional three-box layout and hasn’t gone for a swooping, coupe-like design like the Verna. We spot a few details too, like a shark fin antenna and wing mirrors mounted on the door itself.

While the front of the India-spec car hasn’t been clicked, it’s safe to assume it’s going to be nearly identical to what we’ve seen in earlier spy shots. The face is set to get sharper, with a large grille (possibly dunked in chrome for India) and full-LED headlamps.

On the features front, we’re expecting Honda to go all out. This means the 2020 City should feature goodies such as an electric sunroof, leatherette upholstery, automatic climate control and a touchscreen infotainment system. Honda could also choose to equip the City with a full-LCD instrument cluster (like the Civic / CR-V), considering the next-gen Jazz is set to get it in European markets.

Under the hood, Honda is expected to soldier on with the 1.5-litre petrol and diesel motors. Needless to say, both engines will be BS6 compliant. While it’s almost certain that Honda will offer a CVT alongside a manual for the petrol, it remains to be seen if the CVT is paired with the diesel engine. Notably, the little Amaze gets a diesel-automatic combination, whereas the more expensive Civic doesn’t!

Another question mark (for now), is the rumoured hybrid technology for the petrol City. Honda’s new dual-motor hybrid tech is set to debut with the next-generation Jazz at the Tokyo Motor Show in October. Whether this makes it way to India in the City, or we get a simpler mild-hybrid setup remains to be seen.