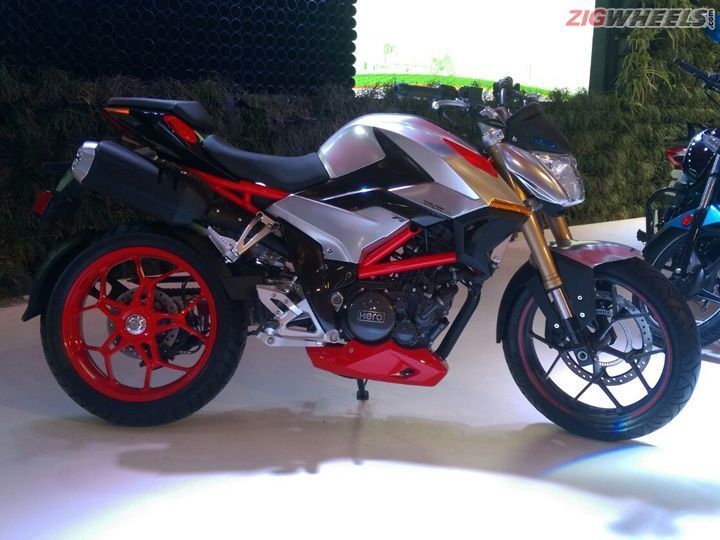 Hero MotoCorp has great plans for 2018. It will kick-start the year by launching the new Xtreme 200 S on January 30 and will showcase the Hero Xpulse concept at the 2018 Auto Expo. According to reports, Hero might also unveil a new 300cc motorcycle at the upcoming Auto Expo. The new 300cc bike will be based on the Hero XF3R concept that was showcased at the 2016 Auto Expo. According to sources close to the project, the production-spec 300cc motorcycle will share many design elements with the concept, but we are sceptical whether a single-sided swingarm and an under-seat exhaust muffler will be retained.

The Hero XF3R concept had the visual appearance of a proper streetfighter with a mass forward design language, sculpted fuel tank, sharp tank extensions, split-seats and chunky forks. It also sported a trellis frame and flaunted an exposed subframe, finished in contrasting red shade. Hero has been very secretive about the new indigenously developed 300cc single-cylinder engine. We expect the liquid-cooled motor to deliver between 25PS and 27PS of power, while peak torque should be around 24Nm. It is also expected that the new bike might employ a 6-speed gearbox, which will be a first for any Hero motorcycle.

While the concept model was equipped with USD forks, it will be interesting to see whether Hero goes ahead with the same in the production version. Damping at the rear is expected to be done via an offset monoshock unit. Braking should be courtesy disc brakes on both ends and ABS is also likely to be offered, though as an optional extra. It is expected that Hero will launch the new 300cc motorcycle during the festive season with a price tag of around Rs 1.7 to 1.9 lakh (ex-showroom). Once launched, the new Hero 300cc bike will compete against the Mahindra Mojo, KTM 250 Duke and the Bajaj Dominar 400.