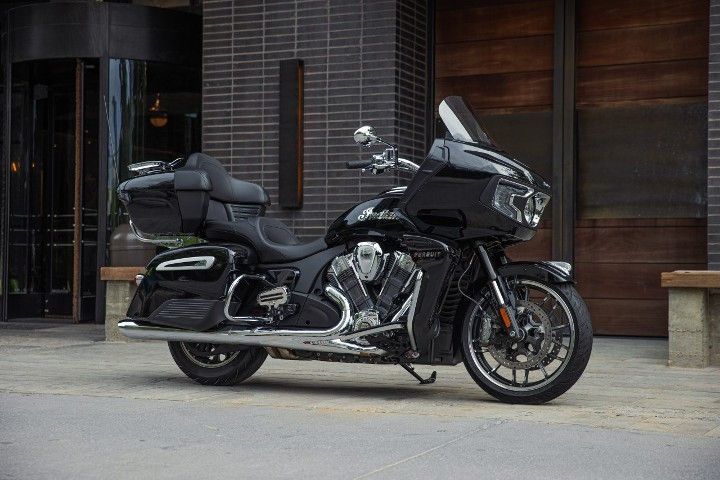 Just weeks after launching the Scout Rouge, Indian Motorcycle has introduced a new tourer to its lineup, the Indian Pursuit. Based on the Challenger Bagger model, the tourer comes in two variants: Pursuit Limited and Pursuit Dark Horse.

First things first, the Pursuit employs the same structure and design as the Challenger, including the aluminium frame and the chassis-mounted fairing but with new luxury touring components such as a cargo trunk with an integrated passenger backrest, heated grips, and a new touring seat. There's also a vented lower fairing that extends downwards. The Dark Horse variant gets a blacked-out treatment with a minimal touch of chrome, whereas the Pursuit Limited variant is quite shiny.

Powering the Pursuit is the PowerPlus V-twin, liquid-cooled 1768cc engine that produces 122Ps and 173.5Nm, mated to a six-speed gearbox. The mill is also borrowed from the Indian Challenger, and its specs along with the exhaust and intake remain unchanged.

The bike is suspended on an inverted telescopic fork at the front (with 130mm of travel) and Fox monoshock with hydraulic adjustability at the rear (114mm of travel), the same as the Challenger. However, the Pursuit gets an electronically adjustable preload for the rear suspension as optional equipment, making it an even more convenient ride for touring.
Dropping the anchors are discs on both ends with Brembo four-piston radial callipers (front) and a two-piston calliper (rear).

For electronics, the tourer gets cruise control, ABS, ride modes, and Smart Lean technology (tunes traction control) that comes with the premium package.