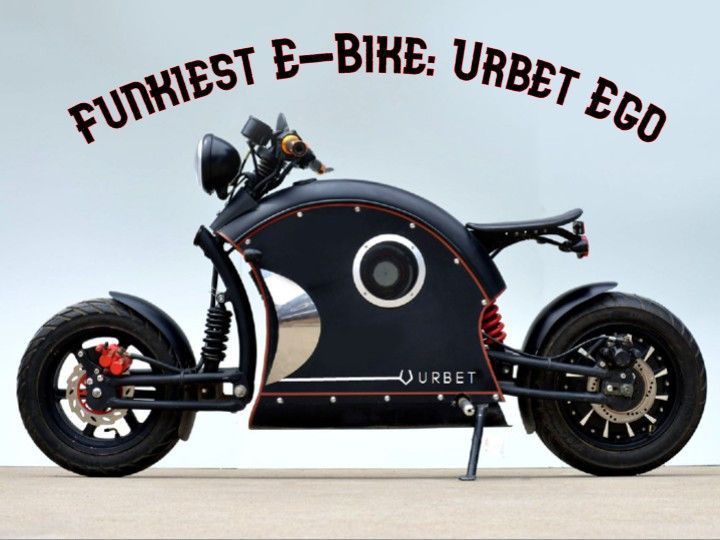 Electric vehicles generally have some distinguishing factors that make them stand apart from the ICE-powered two-wheelers, but some EV manufacturers go a step further. For instance, Urbet, a Spain-based EV manufacturer, with its funky electric motorcycle, Ego. The e-bike doesn’t just stand out but is certain to turn heads wherever it goes.

With one of the most unique design languages that you would come across, the Urbet Ego gets a rounded, arc design that would slightly remind you of the streamliner motorcycles built for land-speed record runs. It gets a bobber-style single seat with a floating rear frame to make it look minimalistic. For a retro appeal, the e-bike follows a circular theme for the headlight, turn indicators, rear-view mirror, taillight and even the analog instrument cluster.

Powering the electric bike is a 3kW BLDC hub motor coupled with a 72V 42Ah Li-ion battery pack, offering a claimed range of a respectable 120km, and a top speed of 90kmph. The performance offered by the e-bike is equivalent to a 125cc internal combustion engine (ICE) two-wheeler. However, a charging time of 7 hours is a bit too much. Urbet should've provided fast-charging support, at least as an option.

Suspension is where things get really interesting, as the Urbet Ego gets a link-type suspension on both ends i.e. it does not get a USD or telescopic fork up front, but a monoshock linked to a swingarm at the front and rear. Intriguing, isn’t it? Anchored by discs on both ends, the e-bike features sporty looking red callipers up front. It rolls on 12 inch wheels front and back.

It features dual pod analog clusters fitted on the handlebar, one for speedometer and the other for indications including headlight and turn signal. It also features a circular digital display on the ‘fuel tank’ to show the battery level. To imitate the sound of an ICE bike, the Ego gets a speaker, similar to the one on the Revolt RV 400, on the side of the fuel tank.

With a price tag of 2,700 euros, equivalent to Rs 2.20 lakh (without Indian taxes and duties), the Urbet Ego is expensive for the kind of performance it packs; however, it makes for an interesting collectible item. The funky Ego is available in Spain and will not be coming to India anytime soon, but you can check out the Tork Kratos, if you are looking for a performance oriented e-bike; or the Revolt RV400, if a commuter EV is what you need.