Ola S1 Pro: The Birth Of The Battery Pack

We got a glimpse of how the battery pack is created for the Ola S1 at the company’s FutureFactory in Tamil Nadu, and here’s how it all comes together 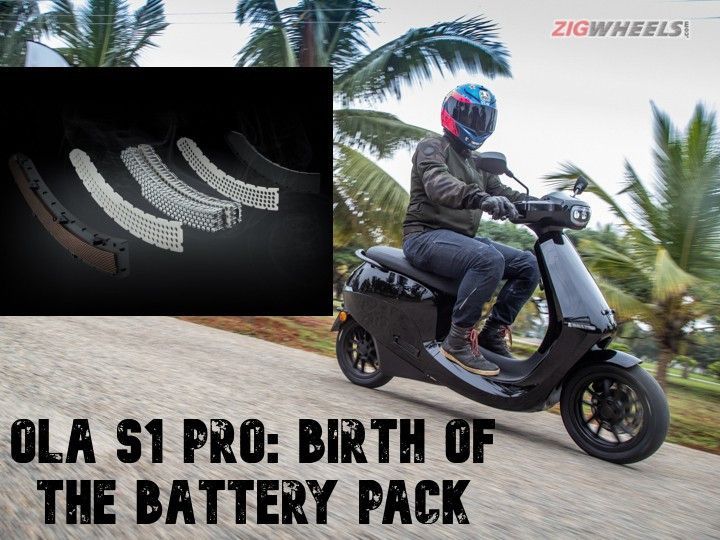 We recently had the privilege of visiting Ola Electric’s FutureFactory in Krishnagiri district, Tamil Nadu, where the company’s Ola S1 Pro electric scooter is made. We’d already revealed the company is working on a more affordable electric scooter, that too with cheaper-to-manufacture-yet-stable LFP (Lithium Iron Phosphate) cells to keep costs in check. We also got to witness how the battery pack is made for the electric scooter, and here are all the geeky details:

Putting together the core part of the battery: the cells

Each and every cell manufactured will have small levels of deviations from the standard output level, so they will have to be grouped together with similar levels of performance for optimum charging and discharging capabilities. There are specific parameters using which the output of the individual cells are measured, and if the cell does not comply, it will be discarded. The cells are mounted on a plastic frame with the help of robots. They’re stuck with a UV light-sensitive glue at precise points quickly so that the glue binds the cells to the frame properly.

Once the cells are fitted into the frame, aluminium ‘bus’ rails are attached to the plastic frame to conduct electricity. Each cell is connected to the ‘bus’ via a special wire bonding technique, which allows the wires to double up as a fuse too. This ensures cell-level intervention so that when one cell fails, its fuse blows, cutting it off from the rest of the cells, thereby preventing a cascading effect -- something that often causes battery fires in EVs.

Birth of the battery pack:

As mentioned earlier, each carrier has 112 cells each, which combine to form the 3.97kWh battery pack. The battery is thermally regulated by passive air-cooling, wherein the base of the cells are cooled by conducting heat out from the cell. The heat is dissipated by the battery case, which is made out of a special plastic that offers five to six times better thermal conductivity compared to conventional plastics. Ola Electric has chosen to go with the plastic as opposed to aluminium to keep the weight in check. For additional heat dissipation, there are fins on the case too, which increase the surface area for conductivity.

Brains of the battery pack:

Each battery pack has 25 sensors that constantly measure parameters including voltage, current and temperature. The sensors feed data to the Battery Management System (BMS). The BMS features two computers, one of which looks into the cells and the other one uses Artificial Intelligence (AI) to control the performance levels. The battery pack has a final metal panel that connects to the BMS to draw out heat from the component.

The quality system checks torque applied to each screw when sealing the pack. Once everything is in place, the process is then greenlit for fitment of other parts. When fully sealed, the battery pack is IP67 rated. We’ve covered more about IP ratings in our analysis here.

Unlike cars, which have active venting systems in place for the battery packs to keep the temperature and pressure in check, the Ola S1 Pro gets a one-off venting mechanism. When the internal pressure crosses beyond 300 millibar or 30kPa, the pack is designed to split into two to let the gases escape. However, once this happens, it will no longer be possible to use the battery. In essence, the venting system is designed to minimise the impact of failure, not prevent it.