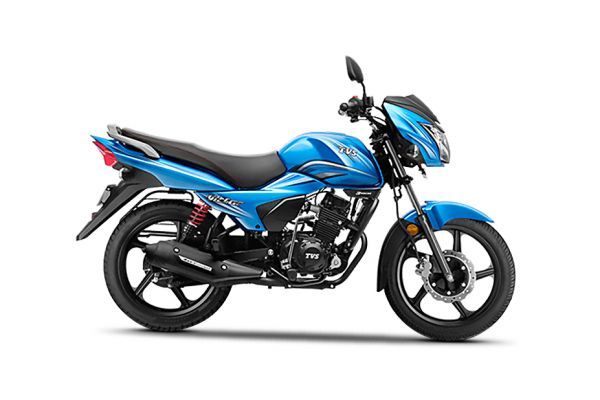 TVS Victor is a commuter bike launched at a base price of Rs. 54,042 in March 2019 by TVS in India. Victor is powered by 109cc engine claiming mileage of 72kmpl. Victor has a single cylinder, 3-valve, bs-iv engine and a 4 speed gear box. TVS Victor comes with front disc break and rear drum break. It is available in 6 variants and 8 colours.

The TVS Victor is the most premium commuter motorcycle offering from the Hosur based manufcaturer. The TVS Victor was among the most popular motorcycles in its portfolio but was shelved as sales plummeted. But in 2016, the Victor was launched again to make a mark in the highly competitive commuter segment. First up was the styling and the new Victor does look similar to the Star City+ but gets a larger muffler, headlight and tank to set it apart.

The biggest change is the new 3-valve, 110cc engine delivering 9.6PS and 9.4Nm of peak torque. The TVS Victor carries a price tag of Rs 53,925 ex-showroom Delhi for the base version. Mileage is a vital aspect for a commuter buyer and the Victor delivers around 67kmpl in real word condition which is noteworthy. TVS has also equipped the new 110cc motorcycle with a semi-digital display, eco and power mode indicators, optional disc brake and powerful 55W headlamp. The Victor fits the bill of a modern commuter motorcycle with its refined motor, good list of features and affordable pricing.

TVS Motor has reintroduced the popular Victor brand in a bid to increase its market share in the commuter space, as the Victor was hugely popular over a decade ago. It was the first motorcycle TVS Motor had developed individually post its split with Suzuki, and it had helped the manufacturer gain critical acclaim as an indigenous motorcycle maker. The new Victor is an all-new motorcycle powered by a refined 110cc motor that also powers the Star City+, though the engine makes 9.6PS in this guise. The Victor’s competitors include the best-selling Hero Splendor Pro and Passion Pro, as also the Honda Dream series and Livo.
Read More