If you had to buy a luxury midsizer that’s fresh in the market and comes with a good overall package, there isn’t a better choice than the BMW X3 and the Volvo XC60. So which one is best? Here’s our middleweight tussle 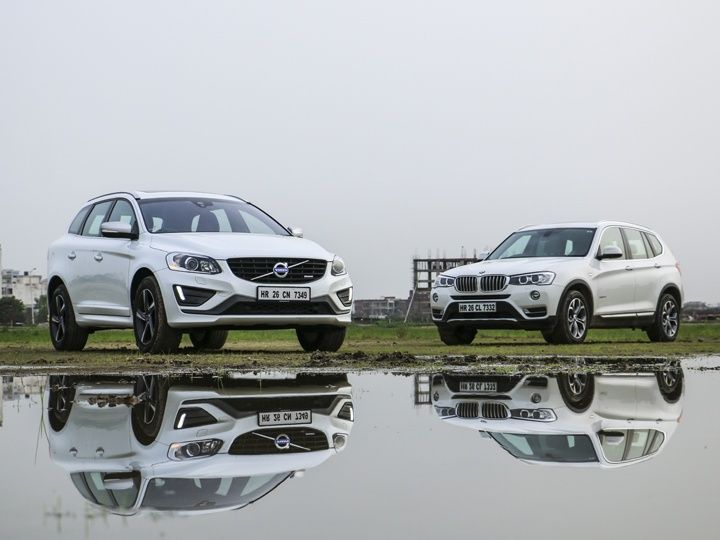 Volvo has been a fringe player in India for way too long. But 2015 is a year Volvo India would like to consider their most aggressive with new launches and updates that promise to bring the zing back into the Swedish carmaker. We love our SUVs and if we had to buy a Volvo SUV, the XC60 is our only choice… Sure the new XC90 has been launched but deliveries begin in September and it’s in another league and price bracket all together. So right now, if we had to pick a luxury midsize SUV, it would be either the XC60, the BMW X3 or the Audi Q5. The Q5 is a bit long it the tooth right now, so let’s focus on the fresher competition.

The BMW X3 like the Volvo XC60 has been thoroughly updated to stay competitive in this segment. It borrows cues from its elder sibling, the X5, and so the fresh detailing makes the X3 a lot smarter than the pre-facelift model. The headlights look sharper and there’s a dose of chrome and silver accents to appeal to the Indian SUV buyer. The X3 also gets a new sculpted bonnet and a redesigned and more aggressive bumper. New wing mirrors and alloy wheel designs round up the X3’s refresh and the 18 inch wheels the xLine trim comes with look fantastic. But what BMW does on the styling front, Volvo does better with a lot lesser work.

The XC60 you see in these pictures is the R-Design variant that gets all the sporty touches R-Design Volvos get. These updates are standardized across the Volvo range from the V40 to the S60 and so all recent Volvos look sporty and desirable. Nice five spoke alloys, a new grille, dual chrome tailpipes, a grey diffuser and silver painted wing mirrors. The XC60 despite a smaller update looks contemporary, smart and more upmarket than the X3.

Between the two SUVs, the interior is a bit of a mixed bag… If the Volvo is the more comfortable SUV to sit in, which it is with the best seats you can get in a car of this price, the BMW has the more functional and better built dashboard. Quality of materials in the X3 is top notch and the front seats are comfortable too. It’s the lower set rear bench of the X3 that loses a few points to the XC60’s rear seat, making the Volvo the more comfortable car over long distances. Both cars offer good amounts of storage space and can haul a lot of luggage with the rear bench folded flat. In terms of layout, both SUVs have family design written all over them. The XC60 gets the floating centre console and TFT instrument cluster, the X3 gets the regular horizontally stacked centre console.

The BMW iDrive system is so intuitive and easy to use for almost every function you need in the car. From the driver’s seat while you are driving, the X3’s features thanks to the iDrive system are easy to use and fiddle with. But the X3 doesn’t offer navigation or a rear parking camera, big misses for a car in this segment. The seats don’t get lumbar adjustment and the cluster dials are oldschool BMW styled, which means very serious and simple.

The XC60 feels a lot more premium on the inside, not only with the quality of leather but the equipment on offer. Heated seats, navigation, parking camera, TFT changeable instrument cluster design, the XC60 has a lot more kit. So on the whole, the XC60 pampers you more than the X3.

Both cars come with 2.0-litre 4-cylinder diesel engines, the Volvo’s being the new mill from the Drive-E engine family and both offer the same 400Nm of torque from their engines. The X3 though has about 6PS more over the XC60 with a power output of 190PS. The XC60’s new engine is a big improvement over its predecessor and feels quite sprightly and refined, and it ought to be as it’s the only engine and displacement that will power all future Volvos. It also comes mated to a new 8-speed automatic gearbox.

Using this gearbox is when you will realize where BMW spends all its R&D money on. The Volvo offers no driving modes which lets you decide how slow or fast or lazy or enthusiastically you want to drive your SUV. BMW does, and that makes the X3 and its powertrain a lot more alert to your needs than the XC60. So when you are in Sport mode in the X3, the gearbox is quick and shifts are jerk free and sends power to all four wheels to get the X3 relatively swiftly off the line. The XC60’s gearbox is programmed for efficiency over performance and so it takes a slight lag before the gearbox approves of your changing throttle inputs and sends all its torque or part of it to the driven front wheels. When it does however, there’s noticeable torque steer.

The X3’s mill is new as well and will go into almost all cars in the BMW range. What a bankable engine it is. At slow speeds or hammering it down the expressway, coupled with its 8-speed steptronic transmission, is the smoother and more efficient SUV to drive.

BMW gets the driving position spot on in the X3, both in terms of visibility and ergonomics. Both cars come with electrically adjustable seats and steerings that adjust for rake and reach yet it’s the X3 that makes you the most at home first. That intangible measure is hard to explain, but it’s got more to do with the driver centric design, I’ll tell you that. The top end xLine variant comes with dynamic dampers that even out road imperfections very well making it an easy SUV to drive despite its size.

The XC60 is more stiffly sprung yet rides fairly well. Credit must go to the fantastic set of Pirelli PZero Rosso tyres it comes with. The tyres are soft compound and are particularly good at keeping tyre noise low in addition to offering fantastic grip. Light steering makes it easy to maneuver and the XC60 feels surefooted at high speeds. If there is something unnerving about the XC60 after swapping rides with the X3 is the particularly high ground clearance of 230mm, 27 more than the X3. We’ll come to how it impacts the XC60 in the handling section. But as far as ride and ease of driving goes, the X3 takes the win.

The X3 tries to offer the dynamics of a sedan and comes quite close to delivering that. Since the drive goes to all four wheels and it’s a road use SUV, the 4WD goes towards offering better cornering stability and grip. And that clearly shows in the dynamics of the X3 as you attack a set of corners or make quick direction changes. The XC60 is a front wheel drive car that rides fairly high so it doesn’t do quick direction changes very well. Again the grip from the tyres mask its dynamic shortfall but that only means you will be wearing them off too soon if you are an enthusiastic driver. This R-Design XC60 gets stiffer anti roll bars so we suggest you opt for the R-Design variant if you had to pick the XC60.

As far as breaking goes, both offer good bite but the grip from the Volvo’s tyres (again!) gives it a bit of an edge in a straight line under heavy braking. It’s the tighter BMW chassis and better dynamics of the X3 however that will give you more reassurance while shedding speeds.

Since the XC60 is a CBU, official ARAI figures aren’t available. In normal driving conditions, we got about 12kmpl which is respectable for a car of this size. The X3 however has the more efficient motor due to its clever gearbox and returns as high as 14.5kmpl when driven with a light foot. Between 50-160kmph, when you lift your foot off the throttle in its most efficient mode, the powertrain is disengaged improving fuel efficiency by 20 percent according to BMW.

As far as pricing goes, BMW recently dropped prices of its cars and now the X3 costs Rs 51.9 lakh for the xDrive20d xLine variant. The XC60 R-Design is priced similarly at Rs 52 lakh, ex-showroom Delhi. Since the XC60 is a CBU, it’s an excellent price as it offers more kit than the X3 and matches it spec for spec.

This Volvo and BMW are so evenly matched it’s a tough choice to pick a clear winner. You need to take notice of the larger network BMW has in India as well as CKD operations that will make the X3 a more affordable car to fix. Volvo’s limited presence puts it at a disadvantage. However, if you ignore the badge on the nose and the post purchase benefits, which a few of you would, the Volvo comes off as the more desirable car in this test. It looks smarter, comes with a lot more kit, has a strong engine and has the more comfortable seats of the two. The X3 however shines through dynamically and gets a better powertrain combination and all wheel drive. It is also more efficient. If you had to pick a better driver’s car then, it’s the X3 no doubt. But if you want a luxurious package, it’s the XC60.

View All
All Upcoming Volvo Cars