Maruti Suzuki has been missing from the premium hatchback space for a long time. Now they are finally here with the new Baleno. How does it stack up against the Hyundai Elite i20, Honda Jazz and the Volkswagen Polo? 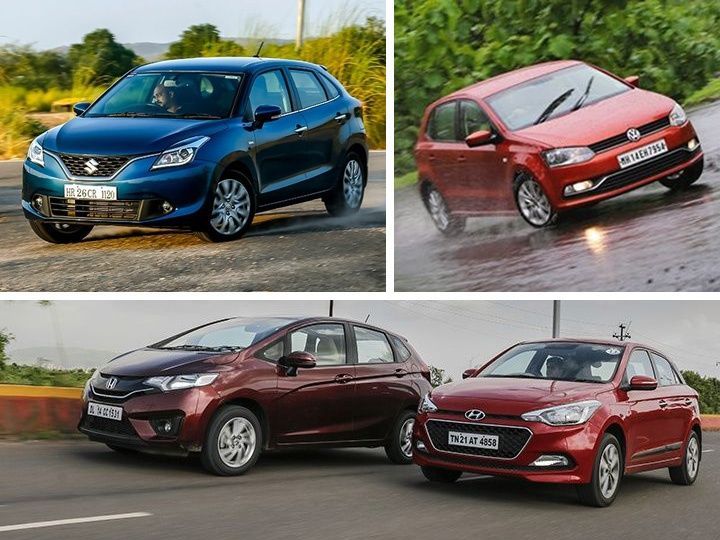 1.)    Engine: To keep costs in check, the Maruti Suzuki Baleno has been given the same engine options that we have already seen on the Swift, namely a 1.2-litre 4-cylinder petrol unit that makes 85PS and 115Nm. The diesel Baleno has been fitted with a 1.3-litre unit that produces 75PS and 190Nm. Both these engine come mated to a 5-speed manual transmission. The petrol also comes with a CVT option.

On paper, the petrol Elite i20 is on par with the Baleno. This one too gets a 1.2-litre mill churning out 83PS and 114Nm. It comes mated to a 5-speed manual transmission but doesn’t get an automatic gearbox option. The diesel Elite i20 makes 90PS of power and 220Nm of torque from a 1.4-litre unit. The diesel unit comes mated to a 6-speed manual transmission.

At 75PS and 110Nm, the Volkswagen Polo’s petrol 1.2 stands at the bottom of the list. Like the Elite i20, the diesel mill makes 90PS but has the most torque in its class at 230Nm. Both the Polo variants come mated to a 5-speed manual transmission. If you are looking for a bit more power and torque, then you can also buy the GT TDI. In this trim the Polo boasts of class leading 105PS and 250Nm. The Polo is also offered in the GT TSI form with a 7-speed DSG gearbox.

2.)    Features: In terms of features the Maruti Suzuki Baleno and the Hyundai Elite i20 stand pretty much neck to neck. Both cars come with a rear camera, touchscreen infotainment system and climate control. Other common features include, Bluetooth, AUX and USB connectivity. In terms of safety, both cars come with 2 airbags and ABS. However, the Maruti Suzuki Baleno gets ABS, EBD and dual airbags as standard across variants. The Baleno scores a few extra points for the Apple CarPlay, while the Elite i20 comes with automatic headlamps.

The only other car in this comparison to get two airbags as standard is the Volkswagen Polo. Aside from that, the Polo and the Jazz don’t quite match up to the Baleno and the i20 in terms of features. While both cars get steering mounted controls, Bluetooth telephony and ABS, they Polo don’t have any standout feature to compete with the other two in discussion. In fact, the Polo even misses out on a touchscreen infotainment system and rear camera.

3.)    Fuel Efficiency: The Maruti Suzuki Baleno claims best-in-class efficiency for both its variants. The petrol gets an ARAI certified 21.4kmpl while the diesel boasts of a claimed 27.39kmpl. The Honda Jazz stands a close second claiming 27.3kmpl from its diesel and 18.7kmpl from the petrol variant. Hyundai claims an efficiency of 18.6kmpl and 22.54kmpl for its petrol and diesel variants respectively. The Volkswagen Polo comes in last in terms of efficiency claiming 16.47kmpl and 20.14kmpl.

4.)    Price: The Hyundai Elite i20 starts at Rs 5.34 lakh for the base petrol variant and goes right up to Rs 8.10 lakh for the top-end diesel. The petrol Honda Jazz and the Volkswagen Polo start at a similar Rs 5.35 lakh and Rs 5.33 lakh respectively. The Highline Polo diesel demands Rs 7.92 lakh. The Honda Jazz diesel is the most expensive at Rs 8.63 lakh. Maruti Suzuki has priced the Baleno very smartly. At Rs 4.99 lakh the base petrol variant is the cheapest of the lot. The top-end diesel trim costs Rs 8.11 lakh which is just Rs 1,000 higher than the fully loaded Hyundai Elite i20 diesel but considerably cheaper than the Jazz. Yes, the top-end Polo diesel is cheaper by quite a margin, but then the Baleno offers more space and features for the premium it demands.

Recommended Variant : Baleno Zeta 1.2
Was this article helpful Yes No
Sorry about that