Baleno vs Brezza vs Ciaz: Which Maruti should you buy?

For someone who swears by the Maruti Suzuki brand there are quite a few options in the Rs 10-12 lakh price range. So which one of these should you buy? 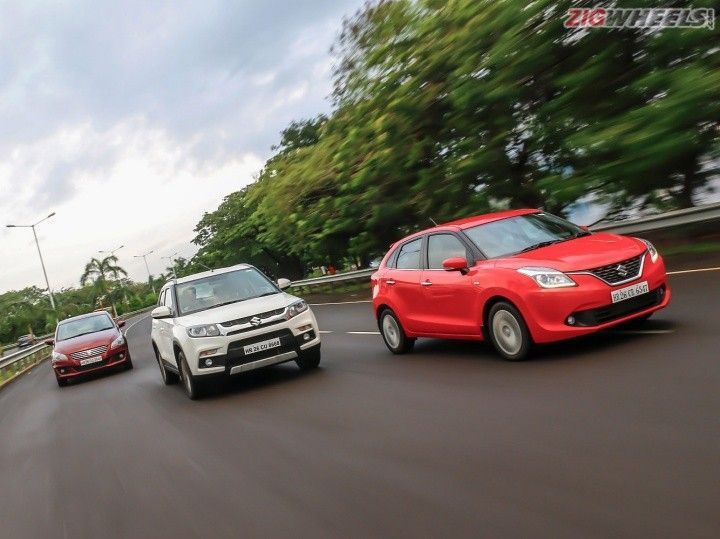 Maruti Suzuki seemed to have brought about a transition in its brand strategy over the past few years, which is working well for the brand that originally started off as a common man’s brand. The first product to spark this change and help it get a strong foothold in the premium car category (something they struggled to earlier) was the Ciaz. By launching the Baleno last year and the Vitara Brezza recently, Maruti has successfully filled a gaping void in its product line-up prior to the launch of these two vehicles, also expanding on its product portfolio in the process.

This however has left the loyalists of the brand spoilt for choice, since all three cars cost in the region of 8.5-10.5 lakh rupees ex-showroom. So which one should you choose? Being Marutis, you know they come with peace of mind and hassle free aftersales experiences, which puts each of these on a level playing field. A buyer spending the kind of money the three cars in question command is usually clear in his mind about what he wants for the money, but admittedly, if he wants a Maruti, he is spoilt for choice today. I for one probably wouldn’t be able to decide. Hence, we thought it is best to drive all three around for a few days and let them fight it out purely on competence and value for money.

The Baleno, Vitara Brezza and Ciaz all three share a lot more in common, and that’s besides Maruti’s unimaginably wide service network. On that note, there’s obvious differences besides the body styles too. One of the most important ones is the fact that the Brezza comes only with the option of Maruti’s Fiat-sourced, tried and tested 1.3-litre diesel engine, unlike the Baleno and the Ciaz which are also available with petrol engines. To keep things fair, we have used their diesel versions here though. The four pot motor is in a lower state of tune in the Baleno though, with its peak outputs being 75PS and 190Nm, as compared to the Ciaz and Brezza’s 90PS and 200Nm as they benefit from the use of a variable geometry turbocharger. Common to the trio is the 5-speed manual gearbox though, that offers slick and precise shifts like clockwork. And that’s besides all three getting 16-inch alloy wheels.

The similarities are not restricted to just the mechanicals though. Inside, they even get the same steering wheel and touchscreen infotainment systems, though the Ciaz misses out on Apple CarPlay since it was only introduced last year, in the Baleno. The top variants of all three are equipped with projector headlamps, reverse cameras, automatic climate control, steering mounted audio controls, height adjustable driver seats and a few more. In terms of safety, the top variants also get two front airbags, ABS and Electronic Brake Distribution (EBD).

Now that we know the similarities among the Ciaz, Baleno and the Brezza, let's find out how they feel from the rear seat, behind the wheel, and more.

The Ciaz was the car that gave Maruti Suzuki plans to go premium a fresh lease of life. It has done well for the brand, giving the segment best-seller, the Honda City a run for its money with its sales numbers. In this comparison though, it bests the Baleno and Vitara Brezza with its build quality, space and comfort. Although you pay a larger sum for the Ciaz, the more premium feel is evident in its build quality and fit-finish. The dashboard with faux wood looks classier than the other two, while the dual-tone treatment gives the cabin an airy feel.

You May Also Like - Comparison between Maruti Ciaz, Honda City, Vento and Hyundai Verna

On the flip side, the Ciaz is isn’t easy as to manage or park in tight spaces being due to its longer length. This length does result in better leg room for rear passengers though. It even has better shoulder room and can seat three abreast with ease, but the rear central armrest can cause discomfort to the passenger in the middle. To add to the comfort factor, the suspension is set up on the softer side thanks to which undulations and potholes don’t jolt your back. The downside of the softer setup lazier handling as compared to the Baleno and Brezza, especially around a series of bends. The Ciaz doesn’t feel as confident despite being closer to the ground and having a longer wheelbase.

As far as the engine goes, there is a bit of a turbo lag but once in its element, the car feels quick. Despite its 1130kg weight the Ciaz doesn’t feel underpowered and is the quickest of the three. The engine feels smooth even at high revs, and is also the most silent among the three at the top of the revband. Most importantly, the Ciaz benefits from Maruti’s SHVS (Smart Hybrid Vehicle by Suzuki) tech, which helps it achieve a claimed efficiency figure of 28.09kmpl, amongst the highest in the country.

Although a bit late to join the sub-4 metre SUV party, Maruti Suzuki ensured the Vitara Brezza pretty much ticked all the right boxes. Its proportions are ideal for an urban compact SUV, while the trademark bold chrome grille, horizontally stacked projector headlamps and faux skid plates at the front and the rear give it the stance and appeal of a proper SUV. Visibility all around is good and the high ground clearance is welcome.

You May Also Like - Vitara Brezza vs its Competition

But of all things, it is the handling of the Vitara Brezza that shines the brightest. The Brezza is taller than the Baleno and Ciaz, but its stiff suspension ensures it stays flat around bends. Lateral movement is well restricted and the wider, super sticky 215/60 section tyres aid its handling further. In fact, it wouldn’t be too bold to say the Brezza ranks among the best handling sub 4-metre SUVs. The firmer setup on the flip side also costs the Brezza a few points in terms of ride quality. Even smaller potholes can be felt, while bigger ones tend to toss occupants around.

Due to its sub 4-metre length the Vitara Brezza fails to offer the kind of space that the Ciaz and Baleno offer. Moreover, the SUV isn’t wide enough to seat three average sized adults at the back. To add to that, its boot space at 328 litres is the lowest of the three. Another disappointment is the quality of plastic used on the door panels and dashboard, which does not feel as good as the other two cars. Fit-finish feels tackier, especially as compared to the Baleno, which is in fact priced lower than the Vitara Brezza.

Maruti brought in the Baleno to rival the likes of the Hyundai Elite i20 and Volkswagen Polo, and the car was rather quick to climb up sales charts. The hatchback sports a fine balance of ride and handling, something that can please an enthusiast without leaving the family with a broken back. It tackles bad roads rather well, while feeling confident to attack corners. What makes the Baleno even more fun to drive is its excellent power-to-weight ratio. The 1.3-litre engine offers 75PS in this guise, but the Baleno is rather light in weight at 985kg, as compared to 1130kg for the Ciaz and 1190kg for the Vitara Brezza. Thanks to its lower weight the Baleno does not feel underpowered even when fully loaded.

But before you actually get inside and behind the wheel, it is the car’s design that gets your attention. While it does look like an evolution of the Swift’s design, the Baleno has a new-age appeal which attracts, especially in red. I particularly loved the headlights. They do look identical to Swift’s, but the illumination on the darkest of roads is phenomenal thanks to the projector beams on the higher variants.

The Baleno’s interiors aren’t as impressive as its design or performance though. Quality of plastics is better than the Brezza but the curvy design feels bland. As far as space is concerned, it does not have the kind of leg room the Ciaz offers but it sure is roomier than the Vitara Brezza. In fact, the absence of a rear central arm rest makes it slightly more comfortable to seat three than the other two. That said, the all black treatment given of the interiors does make it feel a bit claustrophobic.

The three cars are placed in different segments but their prices are just about Rs 1.5 lakh from each other. The Baleno is the most affordable of the three at Rs 8.50 lakh, while the Brezza retails at Rs 9.78 lakh, and the Ciaz Rs 10.54 lakh (all prices ex-showroom Delhi for the respective top variants). So which one should you buy?

If you are a white collared professional who gets chauffeured around town the answer is undoubtedly the Ciaz. It has the space and ride quality and being a sedan, is also an object of status symbol. But if you are the kind who likes to drive, the Ciaz won’t plaster the kind of smile on your face as the Brezza. It looks young, has great handling, more features and still costs lesser. And then of course you get the presence of an SUV with the convenience of compact dimensions.

While these two are impressive in their own right, it is the Baleno that comes across as a much better package. It offers a likeable balance of ride and handling, has the space and is comfortable enough to seat five, while being more affordable than the other two. On paper it does make lesser power, but it more than makes it up for that with its lower weight that in fact endows it with a better power to weight ratio. And if you want more performance, you could probably buy the Baleno RS when it gets launched this October. Don’t take our word for it, go drive the three cars back to back and we’re pretty sure you’ll agree!

Recommended Variant : Baleno Zeta 1.2
Was this article helpful Yes No
Sorry about that