The All New 2015 Honda Jazz is finally here. We know it is rich on space and practicality but can it beat the popular Hyundai Elite i20? 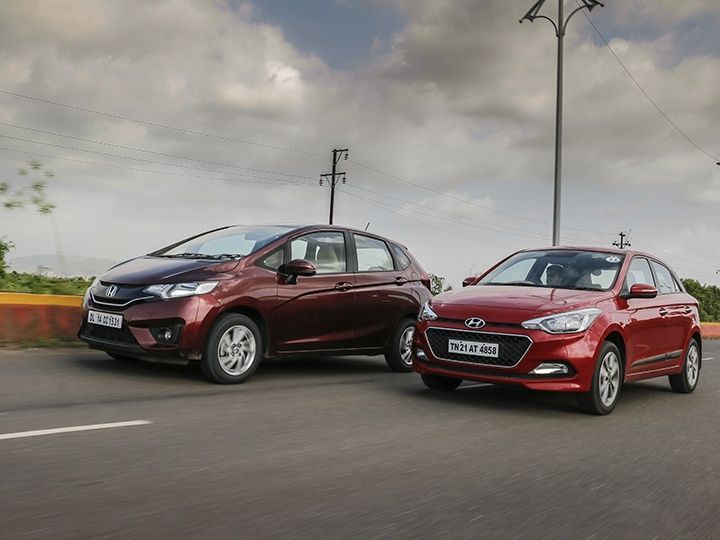 The old Honda Jazz came at a time when the Indian buyers weren't ready to spend close to Rs 9 lakh on a hatchback; a prime reasons for its poor sales. That however was a long time ago and now the market is more open to premium hatchbacks. The challenge for the All New Honda Jazz is going to be a lot different... the biggest  being the much loved Hyundai Elite i20. So, does the 2015 Honda Jazz have what it takes to beat our 2014 Car of the Year? Let's find out.

Picking between the new Honda Jazz and the Hyundai Elite i20, in terms of looks is not easy. While Honda has given the new Jazz a sharper and more aggressive design, while retaining the overall silhouette, Hyundai’s Fluidic Sculpture 2 looks quite attractive too. So, it all boils down to personal preference and tastes.

Honda's sharp cuts and creases all around, the bold piano black grille up front underlined by a chrome strip and the sleek headlamps, all make it quite sporty. A special mention must be given to the Volvo inspired tail lamps that extend right up to the spoiler.

The Elite i20 on the other hand has new-age written all over it. The massive hexagonal front grille that gets flanked by large swept back headlamps gives it a purposeful stance. The sweeping roofline leading into the all-black C-pillar and the tail section gives it a clean look. And then of course there are those fancy looking taillights that make the rear of the car extremely attractive.

The interior of the Jazz looks quite similar to the City, so much that there’s even a blank panel  where the button start is on the sedan. The overall layout with two large boxes for the infotainment system and the automatic climate control isn't the most attractive. Talking about climate control, the chunky knobs on the older Jazz were a lot easier to use on the go, than the touchscreen controls.

The build quality and the fit and finish aren’t as good as the Elite i20 either. What the Jazz loses out on all these aspects it tries to make up in terms of space and practicality. There are a lot of cubby holes in the cabin to store bottles and other knickknacks. And then with 354 litres, compared to Elite i20’s 285 litres, it also steals the title of the biggest boot in the class! The rear bench of the Jazz has what Honda calls as ‘Magic Seats’ which fold in various ways to accommodate luggage of any size. Just like the City, the seats of the Jazz are soft and comfortable but not as supportive as the ones on the Elite i20. As far as space is concerned the Honda is a clear winner with ample of leg and knee room.

Hyundai has smartly designed the interior of the Elite i20. The beige and black combination continues onto the door panels and the seat fabric which is a neat touch. The overall quality of plastics too feels a lot superior to the Jazz. The centre console is better laid out and although this particular model doesn't get a touchscreen infotainment, Hyundai has installed one in the newer 2015 models. The aircon knobs are well within reach and a lot easier to use than the Jazz.

While the i20 was the segment leader in terms of space so far, the launch of the Jazz has changed that equation. There is a fair bit of knee and leg room and the seat bottom is long enough to support the thighs well. However, due to the small rear windows the Elite i20 just doesn’t feel as airy as the Jazz.

In terms of features, both cars come fairly well equipped leaving little to complain about, but the Elite i20 just makes a few ticks more on that list. Both cars get a touchscreen infotainment system, rear camera and steering mounted controls audio and phone controls on the top-end trim. The Jazz as well as the Elite i20 get Bluetooth, AUX and USB connectivity too. But the Honda offering misses out on button start, keyless entry, auto retractable ORVMs, automatic headlamps and wipers, making the Hyundai pip ahead in this department.

The 2015 Jazz gets the same diesel 1.5 that we’ve already seen on the Amaze, City and even the Mobilio. It makes 100PS of peak power and 200Nm of peak torque. Honda has clearly worked towards making it feel a bit more refined; however the engine noise still seeps into the cabin. But as far as the engine itself is concerned, while you won't feel a sudden surge forward at any engine speed, the linear power deliver does make it feel pretty quick of the line. Moreover, thanks to a flat torque curve, you don't really have to work the 6-speed gearbox time and again.

The Hyundai gets a 1.4-litre diesel mill that makes 10PS less than the Jazz but at the same time makes 20Nm more torque. Both cars are extremely different as far as the nature of the engine is concerned. Unlike the Jazz, you have to rev the Elite i20 post the 2,000rpm marker to actually make it come alive. And that is one of the prime reasons why it feels slower than Jazz. That said, once into its own, the Elite i20 feels quick and smooth even as you build up the revs. The engine feels a lot smoother and the cabin is well insulated which makes it a boon while driving long distances. The 6-speed gearbox on the Elite i20 feels a lot smoother too.

This is where the competition gets a little more intense. Between the two cars, the Jazz thanks to its short gear ratios is definitely easier to drive. It doesn’t demand too many shifts even in city traffic conditions but on the negative side, the ‘box feels a little clunky. The Elite i20 on the other had is the other end of the spectrum. Its demands more shifts while driving in the city yo keep it in its torque range but then shifting between gears is a lot smoother.

Show both cars a series of bends and the Jazz feels a bit more confident taking them on. Although there is a fair bit of body roll, but unlike the Elite i20 there is better feedback on the steering wheel. It not that the Elite i20 has poor handling dynamics; it simply doesn’t inspire as much confidence owing to the artificial steering feel. The suspension is setup slightly stiffer as well which also helps aid Jazz's handling capabilities. However, on broken road surfaces, the Jazz feels bumpy while the Elite i20 flattens most undulations.

Honda has built a reputation of making extremely efficient engines and this 1.5-litre diesel offered on the Jazz ranks right at the top among the most efficient. The All New Jazz claims an ARAI approved efficiency of 27.3kmpl. The Elite i20 on the other hand isn’t as efficient with a claimed figure of 22.54kmpl.

However, the Elite i20 manages to gain some ground as far as the pricing is concerned. The top-end trim of the Korean offering is priced at Rs 8.09 lakh, which is rupees half a lakh less than the top-of-the-line Jazz which is priced at Rs 8.59 lakh. And if you consider into your calculation that the Elite i20 has a longer list of features and more premium interior then the difference in price feels a lot more.

So which one of these should you buy? If you are simply looking for a no nonsense car that is rich in terms of space and practicality then the Jazz is surely the best bet. However it won't quite make you feel special, since the interiors aren’t top class and neither does it have an aura of opulence.

And that is where the Hyundai Elite i20 emerges at the top. It feels premium and at the same time has a fair bit of space, good features and decent performance. And for all that the i20 offers it is priced cheaper than the Honda Jazz as well. For us then the i20 continues to rule the segment.