For the Hyundai Creta to stay strong in the compact SUV segment, it will have to hold its own against the upcoming Maruti Suzuki S-Cross and the proven Renault Duster. 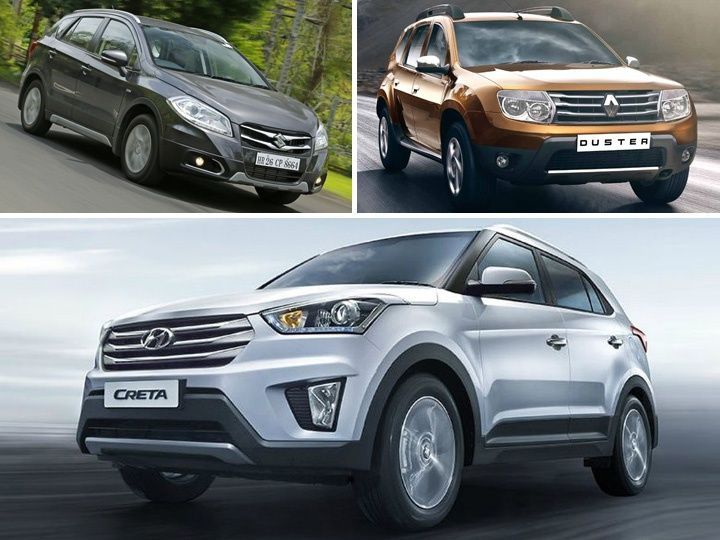 1.) Engine: The Hyundai Creta and the Maruti Suzuki S-Cross are two new offerings in town. But unlike the S-Cross, the Creta comes with both petrol and diesel engine options. In petrol the Creta will come with a 1.6-litre unit that produces 123PS of power and 155Nm of torque. In diesel, Hyundai will bring two engine options – the smaller 1.4-litre 90PS mill that we have already seen on the Elite i20 and a 1.6-litre 128PS unit from the Verna. Both these engines make 220Nm and 259Nm of torque respectively and come mated to a 6-speed manual transmission. However, the latter will also come mated to an automatic transmission making.

The S-Cross will be offered with two engine options, both sourced from Fiat. The proven 1.3-litre mill makes 90PS of power and 200Nm of torque in sync with the ‘DDiS 200’ name. This powerplant comes mated to a 5-speed manual transmission. The larger 120PS 1.6-litre diesel has been christened DDiS 320 in line with its torque rating of 320Nm. All of the mentioned power is sent to the front wheels with the help of a 6-speed manual transmission.

The Renault Duster is the oldest car of the lot and unlike the S-Cross it comes with petrol as well as a diesel engine option. However, the petrol variant is only on sale in the lower two variants. In the gasoline trim, the Duster makes 104PS and 148Nm from the 1,598cc that it displaces. The gasoline units however don’t quite comprise a chink of the sales in this class of cars. Although the Duster has just one diesel engine on offer, you can choose from two states of tune. The lower end variants of the Duster come pump 85PS and make 200Nm of torque. But our favourite is the 110PS version that makes 245Nm. Even after the launch of the Hyundai Creta and the Maruti Suzuki S-Cross, the Duster will be the only one among these to come with an all-wheel drive variant.

2.) Features: Hyundai has been very generous in loading its car with features and the Creta is no different. The top-end SX(O) variant comes with comes with 6 airbags, Electronic stability control, and faux leather on the steering wheel, gear knob and upholstery. ABS is offered across all variants as standard equipment along with power windows, USB and AUX connectivity and central locking. The higher variants also get a 7-inch touchscreen infotainment system with navigation, climate control and projector type headlights.

So far the Duster seemed pretty well equipped in its class, but with these two set to come in soon, the feature list of the popular SUV has started to look relatively smaller. The Duster too comes with ABS, airbags, Electronic Brakeforce Distribution, cruise control and a touchscreen infotainment with navigation system. However it misses out on a reversing camera, leather upholstery, button start as well as keyless entry.

3.) Fuel Efficiency: No matter what segment a car falls under, fuel efficiency is always taken into consideration before making the final choice. While Hyundai hasn’t revealed any claimed figures as yet, we expect the Hyundai Creta to return 21kmpl from the 1.6-litre diesel, the 1.4-litre diesel ix expected to return about 20kmpl and the petrol should claim a mileage of 15kmpl. The S-Cross 1.6 claims a mileage of 22kmpl while the smaller 1.3-litre S-Cross boasts of an efficiency of 23.65kmpl. In the petrol trim, the Duster has an ARAI claimed mileage of 13.05kmpl. The 85PS variant of the Duster returns 19.87kmpl while the 110PS variant boasts of an ARAI claim of 19.64kmpl.

4.) Price: The Maruti Suzuki S-Cross and the Hyundai Creta haven’t been launched yet. However, tentative prices of the latter have already been leaked, starting at a base price of Rs 9.13 lakh going right up to Rs 14.18 lakh. We expect the S-Cross to range between Rs 8-12 lakh. The base variant of the Renault Duster is priced at Rs 8.36 lakh while the top-end RxZ front-wheel drive variant costs Rs 12.49 lakh.