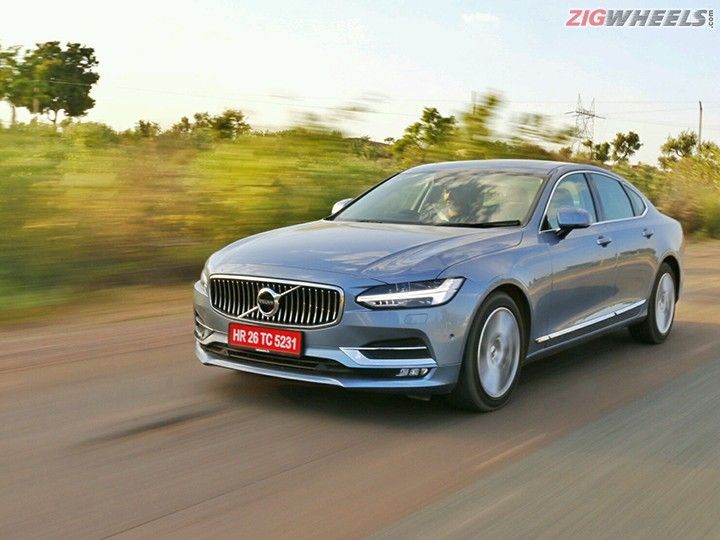 Not too long ago, Volvos were known just as safe, ‘soccer mom’ vehicles, meant for the family car buyer. In India, the carmaker’s buses overshadowed any luxurious ambitions it had, but backed by new philosophies for engineering and aesthetics, all that is set to change. The XC90 was the first product to be based on Volvo’s scalable product architecture (SPA) and poetically enough, the first time we caught a glimpse of the car being tested in this report was through leaked scale model images!

The S90 is Sweden’s answer to German luxury middleweights like the E-Class, A6 and 5-Series and, just under a year after making its global debut, it’s now in India. It takes the reins over from the S80 and apart from being the front-runner to bump up Volvo’s sedan game, it also takes on the challenge of facing this cruel, SUV-crazed world. That said, there’s plenty of DNA shared with the XC90, beginning with the ‘Thor’s Hammer’ daytime running LEDs. These lights, combined with the trademark concave front grille, make the car’s face look distinctive and futuristic, yet understated.

It’s a similar theme on the side profile, and the car looks like it was milled out of a single block of metal. The bonnet curves downward like a gentle dolphin dive and the profile features no aggressive lines, choosing grace over muscular characteristics. Chrome touches around the window-line and doors add some flash without making it look flashy, ensuring that it appeals to the gentleman in Armani and not the boy in Ed Hardy. Wraparound tail lamps envelop the rather stubby boot and combined with the sloping roof, the rear end has a sportback-like touch to it. The car’s wide stance and bumper-integrated exhaust tips add a sporty touch, but overall, this car has an air of royalty like no other.

Step into the cabin and you’re welcomed by the magnificence of minimalism. Most luxury cars come loaded to the gills with technology, but almost gloat about it with the sheer number of buttons and dials they feature around the cockpit. Not so with the S90, and it’s the dream of someone with OCD. I particularly like how the central air vents are shaped like the tail lights of an early 70’s Cadillac Fleetwood, not to mention, the wooden inlays around the cabin that add to the feel-good factor.

The highlight is the 9-inch touchscreen that sits in the middle of the dashboard. It’s more command centre than infotainment interface, since there’s so much you can control through it, including the 4-zone climate control system. The 19-speaker Bowers and Wilkins sound system can be controlled via voice commands or the steering-mounted control and central display. Now aesthetically, the setup does come with the obvious advantage of avoiding clutter, however, you do need to take your eyes off the road to use it. The touch sensitivity is spot on and legibility is no issue even under direct sunlight, but the piano black surround and screen are a magnet for dust and fingerprints.

Our test car’s interior sported a black and beige colour tone, which will be the popular choice, but the light shade does tend to stain easily. Quality, though, is top-notch and what really impresses is the overall support the seats offer. The cushioning is a tad firm, but comfortable and cradles even large frames like mine perfectly. The cherry on top is the wide range of adjustment options and apart from offering ventilation, the seat base cushioning can be extended too.

The clean cabin layout adds to the sense of space and in fact, the S90 is quite roomy. There’s ample legroom and headroom on offer and intercity trips will be a comfy affair. It’s the same case in the rear seat too, but there are a few things to keep in mind. The car sits quite low and ingress will be tricky, particularly for the elderly. Also, the central tunnel in humongous, so it can only seat two at the rear. I would’ve liked a slightly reclined backrest angle and maybe cooled seats for the rear too, but otherwise, it’s a great place to be chauffeured around in. Apart from the manual sunshades, the thick C-pillars do a great job of lending to the sense of privacy. The rear seat base can also be folded to double up as a booster seat. Of course, you get a rear armrest and integrated pop-out cupholders, but the quality here could’ve been better. The boot (500-litres) is plenty accommodating too, and cruising to that local hill station with the family will be no trouble.

You also get a cruise-friendly engine to back up the weekend trip credentials. Under the bonnet is Volvo’s ‘D4’, 2.0-litre (whoops, 1,969cc) engine that produces 190PS of power and 400Nm of torque. The on-paper numbers put this somewhere in the middle of the league, but what you need to understand is that this isn’t a powertrain tuned for the enthusiast. Throttle response is crisp, power delivery is very linear and there’s no throw-you-into-the-seat action even when you slam the pedal down.

The engine is quite the aristocrat and while it is quite rev happy and presents no tangible turbo-lag, the 8-speed automatic gearbox is eager to upshift. Kickdown time isn’t as quick as say, the 520d’s ZF-sourced autobox, nor are gear changes as seamless, especially if you lead-foot it. It’s not a sporty unit and apart from the lack of paddle-shifters, the gear lever itself feels rather clunky to use. That said, the torque spread is wide and the car glides ahead without any theatrics. Despite the S90’s modern packaging, it’s a classy, old-school luxury sedan when you bring it down to the driving experience. What’s a bit of a turn off though, is the engine’s sound. It sounds a bit too diesel-esque for my tastes and takes away from the premium feel.

What impresses though, is the ride quality. 90 per cent of our drive was on roads where we’re pretty sure the moon landing was staged, but the S90 dealt with them without breaking a sweat. It’s only through the really bad bumps that you hear the suspension express its ire, and even then, occupants in the cabin are kept aloof from the abominations below.

Bear in mind though, deep potholes or those awkwardly tall speed breakers can scrape the undercarriage if you’re not careful, thanks to the low 152mm ground clearance. We’re hoping Volvo offers a rough road package. The steering is extremely light to use, but feels a little vague even as you pick up the pace. This can be solved to some extent by choosing Dynamic mode on the drive mode selector, but while the steering gets more direct, I did find myself wishing for more feedback.

Now this may be the next step in Volvo’s evolutionary chain, but true to the Swedish automaker’s ethos, safety takes paramount importance. The brakes offer fantastic bite and the car stays composed even under panic braking. Additionally, you’re cocooned by airbags, pretensioner seatbelts, emergency brake assist, lane-keeping assist, and a lot more.

So is the S90 a game-changer? Well, in certain ways, yes. The fact is, luxury cars are no longer an uncommon entity. Even coughing up half a crore doesn’t buy you exclusivity these days, but the S90 changes that. It features a new-age design that not only redefines the world’s view of Volvo, but offers a unique appeal that even more expensive luxury barges can’t offer. It’s for the executive who wants something understated, yet makes a statement.

Volvo will offer it only in the Inscription variant that gets all the bells and whistles, and despite being a direct-import, it’s expected to come at a price of Rs 55-60 lakh. The S90 offers distinction in luxury and unlike its predecessor, it’s a package strong enough to make the Germans sweat.