How does the facelifted CLA, Mercedes’ most affordable sedan, tempt you to step into the fold of the three-pointed star? 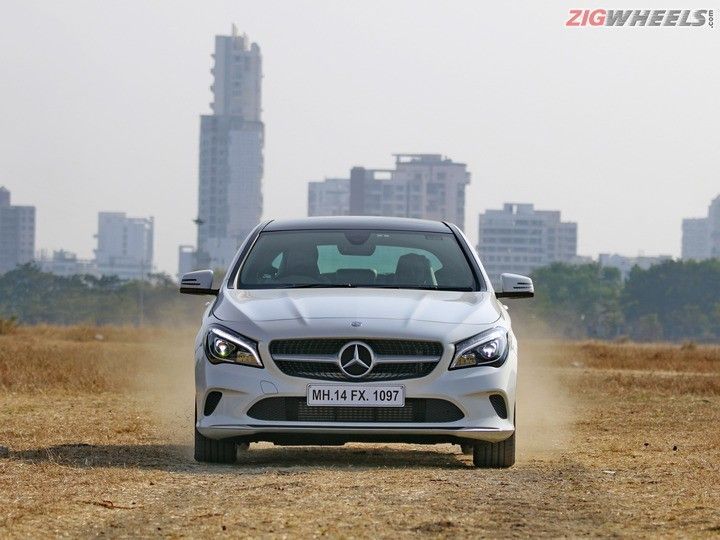 The CLA is a very important car for Mercedes-Benz and the reason is quite simple. It’s their entry level sedan and acts as sort of a gateway model into the Mercedes family. In fact, around 80 per cent of the people who bought the CLA never actually owned anything made by the three-pointed star before. Now, just under 2 years since the car was first introduced in India, it’s here in its updated avatar. So we figure out what’s new and what’s improved.

The CLA is Merc’s front-runner to bait younger buyers who eat with their eyes first. No complaints on that front and the baby Benz still looks sweet enough to make us reach for the insulin. The CLA’s aesthetics heralded a change at Mercedes-Benz from safe. Even today, the styling isn’t a shortcoming, so the cosmetic changes are subtle. There is a mildly updated front bumper with a chrome underline and larger airdam, while the old bi-xenon headlights have been swapped for a set of LED units. The ‘Cavansite Blue’ metallic paint shade is also now available and like before, the petrol CLA 200 you see here is offered exclusively with 17-inch wheels.

The coupe-esque silhouette remains, and while the LED tail lights get reworked internals, they don’t look as distinctive anymore. The chrome tipped rectangular tailpipes now sit flush in the tweaked rear bumper, making the CLA’s hunkered down rear profile look sportier. Overall, it still offers the CLS coupe’s beauty on a smaller scale.

What hasn’t changed here is the quality and attention to detail, nor has the fact that it’s still best as used a 4-seater for adults who are under 6ft tall. What has changed, though, is the free-standing infotainment display that now has an 8-inch screen diagonal (up from 7-inches) and gets Android Auto and Apple CarPlay connectivity.

There’s a little switcheroo too. While the lower buttons on the central control panel are now finished in silver instead of black, the instrument cluster gets a CLA45-esque black backdrop instead of the old silver. The central panel also houses the new Dynamic Select button, Mercedes’ terminology for its drive mode selector, which can be used to tweak the steering and powertrain as per the drive scenario.

Yes, there is a panoramic sunroof and the petrol CLA is only offered in one variant. Features include ARTICO leather upholstery, sports seats finished in black or beige (depending on the exterior colour), electrically adjustable front seats with the memory package and keyless go.

While you do get a great rear camera, the omission of parking sensors is quite a glaring one. The car also misses out on automatic climate control and rear AC vents, which raised a few brows at the office.

By petrol standards, it’s not the most silent unit from the outside, but shut the frameless doors and the cabin insulation cuts out any coarseness from the 4-cylinder unit. The CLA 200 also represents a great combination of a light weight car (1,510kg) with a short footprint, matched with adequate power. It doesn’t take much time for this engine to put a smile on your face. It offers rapid performance off-the-mark and continues to excel in its mid-range too thanks to a peak torque band that’s even wider than the diesel’s.

What eggs you on to go faster is the ride quality. The suspension is firm and communicative enough to inspire confidence in handling, yet, bad roads or smaller potholes don’t upset it too much. High-speed stability is impeccable and the car’s 225-section tyres add to the sense of confidence too.

However, while you do get some of the driving traits of a hot hatch, its dynamics just fall short of hitting the spot. The steering is light for city use, yet, direct enough when you pick up the pace, but it could do with more feedback especially through the bends. There's noticeable understeer when you hit a corner hard too.

The 7-speed automatic transmission is also tuned towards comfort, so, while gear changes are seamless, they aren't as quick as you'd expect of a dual clutch transmission. On paper, the CLA 200 is about half a second behind the A3 petrol in the 0-100 sprint - wonder how much of a difference that Audi DSG gearbox makes. During daily drives though, these aren’t drawbacks to break a deal and this compact luxury sedan is still a hoot to drive.

For safety, the confidence inspiring brakes are backed up by 6 airbags, Attention Assist, ABS, ESP, ASR and a few other life-saving abbreviations.

The CLA is still the great package it always was and the facelift just adds that little bit more. Yes, for Rs 31.40-33.68 lakh (ex-showroom Delhi) or less, the CLA still feels a bit short on the sense of spaciousness and ride comfort and there are alternatives that can give you better VFM. However, with its stylish looks and fun to drive nature, the CLA just knows how to make you feel special, and it is well-built and a decent driver’s car too. If you’re looking to upgrade to a ‘big brand’ for the first time, the CLA is still a great way to do it.

Recommended Variant : CLA 200 CDI
Was this article helpful Yes No
Sorry about that