The latest in a long list of sub four metre compact cars is the Mahindra Verito Vibe and it's more than just a Verito without a boot! 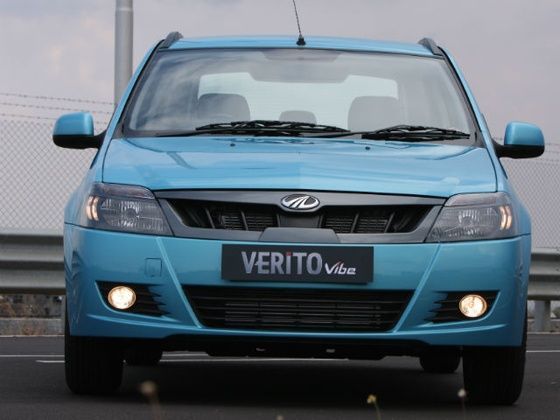 If you’ve been following the Indian automotive scene for the past few years, hatchbacks springing out of sedans or sedans springing out of hatchbacks isn’t really a phenomenon that will catch you by surprise. Whether you like it or not, taxation laws laid down by our government led to this sudden formula of having a hatchback and a sedan on the same platform. Any vehicle under four metres and running either a 1.2 litre petrol or a 1.5 litre diesel engine gets a excise duty benefit that is no mediocre sum.

The latest fad seems to be to cut down the boot from existing sedans to make them meet that length criteria and so we have cars like the Suzuki DZire and the Tata Indigo eCS as well as hatchbacks like the Toyota Liva that are absolutely practical machines taking advantage of those very taxation laws. The latest to join that fray carves itself out of the Mahindra Verito and has been christened the Verito Vibe.

It’s a relatively easier task to convert a sedan to a hatch and vice versa if the car has been designed that way right from the word go, but bear in mind the fact that the Verito Vibe traces its roots back to the Renault Logan and the gargantuan task that Mahindra’s R&D team had becomes eminent.

This is a car that was designed to be a sedan and any kind of chopping must have required some mammoth engineering skills. So while the manufacturer itself is calling the Verito Vibe a shortened sedan, debate is open on whether you’d like to look at it that way or just think of it as a hatch instead. We prefer the latter.

There isn’t any change from the Verito sedan as far as the front half of the car is concerned – it still has that very distinctive boxy front though the new grille and the recent upgrades the sedan got have given it a much sportier visual cue than before. Where the Verito ends and the Vibe begins is in fact from the C-pillar rearwards. The rear windscreen slopes back heavily and is flanked on either side by two vertically stacked tail lamps that the designers at Volvo will definitely recognise and be proud of. The details are what are most impressive and that is evident in each element of that tail lamp cluster as well – right from the high-mounted indicators to the brake lights.

Now all that is typical hatchback styling, but where the debate begins is when you take a look at the Verito Vibe’s boot lid. Adapting the Verito to a sub-4 metre length has meant that the rear windscreen remains fixed quite unlike any hatchback we have seen in recent times. Pop open the boot through the remote release beside the driver’s seat and the tailgate swings upward much like a sedan – without the rear windscreen attached. With the parcel tray fixed in place as well, there is no access to the Verito Vibe’s boot from the passenger compartment – again like a sedan.

Whether or not the tiny lip of the bootlid qualifies the Verito Vibe to call itself a small sedan is something you’ve got to decide for yourself, but like we mentioned, we’d much rather keep things simple and still call it a hatchback. The biggest upgrade in the cosmetic department that the Vibe gets over the sedan though is in the alloy wheel design that is available with the top end D6 variant which seems like its been picked straight off an expensive accessories list.

All in all, the Verito Vibe isn’t the sort of car that will really tickle everyone’s styling tastebuds, but it does look good from certain angles – very reminiscent of 90s hatchbacks which isn’t really a bad thing. It may not have the curves, but thanks to that rear end treatment it sure has the visual muscle to carry off pretty decent road presence. Then there are also small details like the blackened headlamp treatment that lend a lot of character to the car as well. Much like the shortened sedan versus hatchback argument, whether or not the Verito Vibe is a decently good looking car or not is left up to individual judgement.

What the Verito Vibe lacks on the styling front, it more than makes up in terms of practicality. With interiors being a straight lift from its sedan sibling, the Vibe is probably one of the most spacious cars in its class. Even with the front seats accommodating full grown adults, there is a whole lot of leg room for the ones on the back bench. That’s not all, the rear bench can in fact seat three adults comfortably and the bench itself is adequately plush as well. Despite the sloping rear windscreen, headroom shouldn’t be a problem for taller occupants either.

There’s also enough cubby holes to store loose items and the small notch in the dash just above the glovebox will prove to be a handy storage space as well. Seat fabrics and plastics quality is quite what you’d expect if you’re familiar with the Verito sedan as well and there’s a very nice mock carbon fibre treatment to the centre console too. Instruments are a straight lift off the Verito and the dash gets a nice two-tone treatment in black and beige. Probably the only thing lacking from that premium feel is the absence of steering mounted controls even on the D6 variant that we drove.

The Verito may have shed its length but the boot is still pretty cavernous. The only thing that may end up being a cause for re-consideration is loading and unloading capability into the Vibe’s boot. With the rear windscreen fixed, it gives the impression of a rather tiny access port to the boot – though we will try fitting in a big suitcase to really test accessibility when we get our hands on the car for a complete road test later. The Verito Vibe’s brochure does specify the capacity in the trunk as 330 litres which is pretty decent on paper.

The Verito Vibe will start off life with just the 1.5 litre dCi oil burner from Renault in its engine bay. This powerplant is a tried and tested workhorse and we barely need to touch upon its proven track record in the Indian market, especially with the Verito. The five-speed gearbox that the engine is mated to does work very well too with some sorted gear ratios that mean that the Vibe doesn’t falter even in high gears at low rpms. The powerplant makes the Verito Vibe very driveable just like its sedan version and the shedding of some weight on the backside might have just made the package even better.

While we weren’t able to perform an instrumented test of the car yet, out manually timed stopwatch runs indicated a 0-100km/h time of just around 17.2 seconds. The car did also hover around the 140km/h mark at full throttle in fifth gear and given more room it could do even better. The ARAI claimed and advertised fuel efficiency for the Verito Vibe stands at 20.8 kmpl and this is another quantity that we will thoroughly evaluate once we get the car for a proper road test.

The Verito Vibe will mainly see use in and around the city and for those occasional road trips on the outskirts and considering that it is pretty stable even at three-figures speeds. Brakes are effective though they lack the confidence inspiring feel that some other cars have. The steering itself though, is on the heavier side and that could end up being a pain at low speeds and heavy traffic.

To sum it up, the Verito Vibe is more function than it may be form and that is a formula that could very well turn in Mahindra’s favour. With an ex-showroom price tag of Rs 5.63 lakh (ex-showroom, Mumbai), the Verito Vibe will appeal to buyers planning to buy a smaller car – after all if you’re getting the space that the car has to offer in more or less a similar price, why not go for the bigger car! If you’re in the market looking for a hatchback (or shortened sedan) and your biggest priority is space, the Verito Vibe could just be the car you’re looking for.