The Range Rover gets even bigger on luxury for 2018. We drive the new P400e plug-in hybrid variant to see how much more pampering you can expect from the luxed out SUV from Solihull. 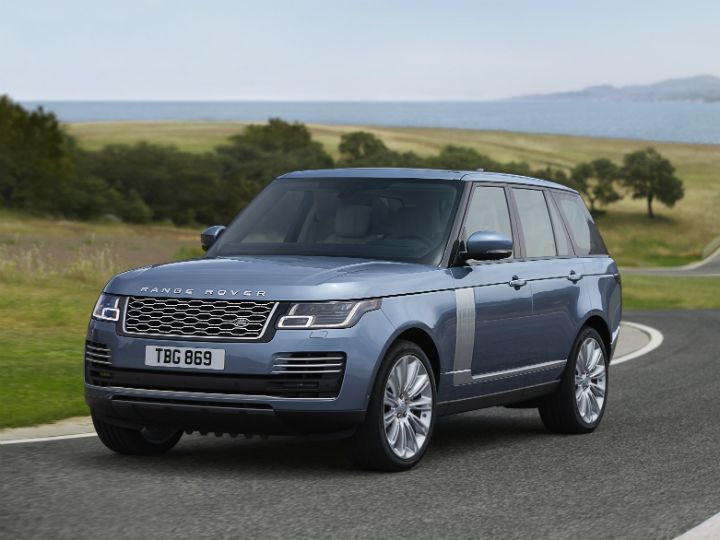 The Range Rover has been the envy of not just luxury SUVs, but luxury limos too. For 2018, Land Rover has made a raft of revisions to try and keep the flagship Range Rover’s imperviousness and dignity unparalleled. We spent time with the new Range Rover in the rolling English countryside to find out what’s new.

Really new? That’s the plug-in hybrid aspect of the Range Rover P400e. It was the only engine option available at the drive event in the United Kingdom. However, this won’t be coming to India until the fog and fear of taxation clear. So, let’s focus on what we will be able to see and feel in India, that’s the cabin and the design.

Yes. But, at what? As most users will vouch for it, the RR is not used for running wild through muddy fields or dry deserts, it’s to be chauffeured around the urban jungle. So, what’s new in the world of pampering? Opt for the Executive class seating option, and you’ll find that it is more sumptuous and more practical too. The seats are wider and cushioning softer. The leather, possibly the best. If that doesn’t relax you, how about a hot-stone massage. No? There are 24 other massages to choose from.

What our desi families will surely love is the new centre console that can now be folded up electrically to allow you to seat three when required. Earlier this console was fixed and made this a strict four-seater. Third row? That remains firmly off the table. However, if you choose to drive, you will appreciate the new front seats which are wider and also have 24-way adjustment. I can assure you these are almost sofa-like in the way they gently cradle you.

The two 10-inch screens on the centre console, dubbed Touch Pro Duo, complete the look of the cabin perfectly. The hi-res display looks crisp and clear, with the functions split amongst them. Like on the Velar, on which this system debuted, the top screen can be tilted to reduce reflections. This screen allows you to browse through the navigation system, adjust the ambient lighting system, which now features three zones and 10 colours, or dish out custom layouts too.

The air-conditioning system, seat and car settings can be controlled by the lower screen. The Rangie also gets touch-sensitive controls on the steering wheel. These controls adjust to the menu being used and hence are even more intuitive to use.

At the rear, the control for the windows, blinds and seat settings are new too. These certainly look very 2018 as a glossy black panel replaces a bunch of individual buttons. However, pushing down on the pad leaves you guessing as it lacks a positive click. Actually, haptic feedback would be better still. In the absence of this sense of feedback, starting the massage function felt a bit hit or miss.

Range Rover customers like it as is, so, no fooling around. The Range Rover is a massive vehicle and it really towers over everything. But there is some sharpening up of the features. The grille is now in mesh and also gets a chrome treatment. The LED DRLs in the headlamps are smoother to look at, but the lines are tighter. There are four headlamp options to choose from, starting off with the Premium headlamps that use 24 LEDs. The top-of-the-line Pixel Laser option uses 144 LEDs and four laser diodes. We get a kick thinking about it, lasers! This setup is said to be capable of lighting the road up to 500 metres but at the same time is intelligent enough to block light from blinding oncoming drivers. The rear tail lamps have the LEDs clustered as two rectangular islands.

Yes, yes, we did. First, let’s clarify that the V6 and V8 petrol and diesel engines will be carried over for India. Except for the bump up in power to 550PS for the 5.0-litre supercharged V8 petrol engine, there are no mechanical changes to these drivetrains and since we didn’t sample them, we can’t talk about them for now. However, LR says that the air-suspension has been recalibrated and there is a new subframe at the front to better isolate the cabin from shocks and vibrations. Also, the Rangie gets Dynamic and Comfort modes to better adapt to the mood you are in. The Range Rover even now is a vehicle that prefers to be steered and prodded with restraint. For a 2.5 tonne SUV, it is admirable as the 50-50 torque split keeps it planted on the road. But, just don’t expect it to be truly dynamic on your favourite road as it will roll through those essess.

Fine! Under the bonnet of the P400e is an in-line 4-cylinder 2.0-litre turbocharged petrol engine. The electric motor has been designed into the 8-speed ZF gearbox that it comes combined with. The drivetrain sends power to all four wheels and in electric mode, Land Rover says that it can be driven for 51 kilometres. While we can’t attest to that, we assure you that driving the P400e was very relaxing. The shift between electric to hybrid was barely discernible when in commuting mode. It was only when flat-footing it that the 4-cylinder engine’s less cultured note became apparent.

The batteries sit under the boot floor, but not right under. As a result, boot volume has been eaten into by just 10%. Also, the electric hardware means weight penalties, and the P400e has to handle, roughly, an additional 250kg. Despite the weight penalty, it rides plush, but over the bigger dips and bumps, the suspension tightens up to keep from wallowing.

Dig up some dirt?

What are the odds? Obviously! And believe it or not, even in electric mode. Yes, you can drive around silently through the wilderness with nothing but electricity driving all four wheels. The low range can also be used in this mode, so serious off-roading ability is intact. Also, the Range Rover’s 900mm wading depth hasn’t been compromised by the various electric modules strapped underneath. Wading through a waist-high stream proved that, and while it could have done it in EV mode, Land Rover advises drivers to keep the engine on.

As we made our way over the rain-soaked English countryside, the Range Rover made short work of the slushiest inclines, grassy and rutted paths. Basically, as expected. The only real human intervention required was to shift to neutral when engaging the low-ratio box. Rest of the time, just toggling through the different modes was enough to keep the Rover marching forward.

There’s no doubt that the 2018 Range Rover pampers you more. We’ll have to wait till we sample it here in India to get a sense of just how elevated a plane it takes you to now. However, it is sure that this better equipped and more luxurious Range Rover will be more expensive too. While the added equipment is one part of the equation, the hike in import duties is likely to push prices up by Rs 8 - 35 lakhs, depending on the variant. Lavish? You bet.