The EcoBoost returns with the promise of adding some fun to the petrol EcoSport. Can it? 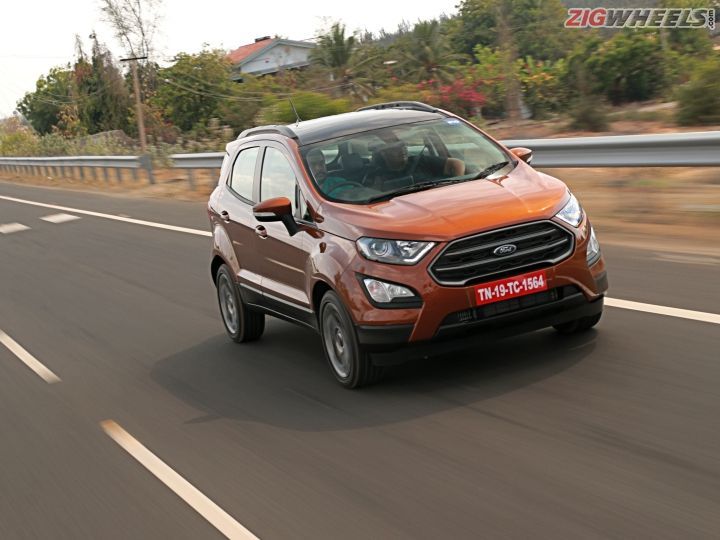 Ford’s compact-SUV has a new top-of-the-line model. It’s called the Titanium S, and that shiny red badge on the boot tells us it should be a bit special. With 'S' cars, we’ve always seen Ford pushing the envelope of everyday performance. And, with the return of the turbocharged petrol engine, and a brand new 6-speed gearbox, the EcoSport S looks prepped on paper too. Let’s jump right in, then.

For an engine that didn’t really sell half as much as Ford would’ve hoped, the (temporary) discontinuation of the EcoBoost did create quite a flutter. It’s taken the brand nearly seven months to bring the motor back from hibernation. Thankfully, they’ve made the recipe a bit more potent by adding a new Getrag-sourced 6-speed gearbox to the mix. Is this the fun EcoSport we were all waiting for?

Mechanically, there’s no change to the EcoBoost engine. It’s the same award-winning motor that develops a delicious 125PS of power and 170Nm of torque. All from an engine whose block fits on an A4 sheet of paper. The fairies of forced induction not only make the motor punchy but also aid efficiency and reduce emissions. Talk about being a jack of all trades.

Thumb the starter, and the Ecoboost comes to life with the vibrations you expect from a three-cylinder engine. But, in no time, it settled into a smooth and silent idle. Refinement is clearly a highlight, and we doubt you'd hear the engine at all while pottering about inside the city. Speaking of which, the motor does feel quite easy to drive. The clutch isn't the lightest, but it isn't something that'd give your calf a workout either. It bites in early and has a predictable action as well. Even when the turbo isn't spooled up, you aren't bogged down by a load of lag. That’s definitely an improvement from before! Light inputs on the throttle are enough to keep pace, something that'd be plenty helpful when you're stuck in bumper to bumper traffic.

Shift up, prod the gas and you'd feel the engine making swift progress. Sure, it doesn't really pin you to the back of your seat, but it does feel effortless in the way it picks speed. There's no violent surge of torque here either. Just a motor that's comfortable building speed. That said, like most turbo-petrols, there's hardly any point in redlining it. Its strength lies in the punchy mid-range.

And that's a good thing. Because at highway speeds - that's exactly where you're going to be. At 100kmph in sixth, the motor is ticking around 2400rpm. Stepping on the gas at this point gives you all of that 170Nm, which is plenty for a quick overtake. You don't really have to play around with the new 6-speed gearbox, then.

Not that we'd mind that too much, though. The shift action is slick, and it does feel like a full generation ahead of Ford’s old IB5 gearbox that's been around for donkey's years now. If only this gearbox was made available on the diesel as well!

What? Can’t be! But, it’s true. We expected Ford to fiddle with the steering setup, or mess about with the suspension setting. They haven’t. This comes as a bit of a surprise to us, considering what they served up by making minor tweaks to the Figo and the Aspire.

Ford’s reasoning for not tinkering with the springs though, seems totally justified. The EcoSport is already stiffly sprung, that just about cuts it for everyday drives. Stiffening it further would’ve made the ride borderline uncomfortable in their books.

As far as the steering is concerned, Ford says it didn’t feel like it needed a quicker rack. We’d agree. While our drive along Chennai’s ECR barely gave us anything we could call a corner, the steering feels familiar. It's got the right amount of weight whether you're crawling or cruising. On the long swooping corners, we never had to correct our line.

The last piece of the puzzle are the tyres. Ford offers 17-inch alloy wheels wrapped in 205/50 section Bridgestone tyres in the S. Yes, these are the same tyres the Titanium+ used to get, but that's now been downsized to 16-inchers. Grip levels are adequate, but we'd have expected a stickier set of rubber to go with the S badge.

Show for the go

There’s no major design update to speak off. But, the S does get some distinguishing features. For starters, it has been stripped off of all the chrome. The grille is finished in a sinister looking black-gunmetal grey combo, and the smoked headlamps (that now get HIDs!) just add to the aggression. Subtler changes such as the use of dark grey for the faux skidplate, the black roof and the black roof rails round things off. Finally, it gets a set of sweet looking 17-inch alloy wheels finished in, you guessed it, dark grey. This is low profile rubber we’re talking about (it's down on about 20mm of sidewall compared to the 16-inchers) so please slow down if you spot a pothole. If you don’t, you’re looking at a possible bubble or tear in the sidewall. Notably, the tyre pressure monitoring system has been struck off of the Titanium+ feature list, and now been reserved for the S.

Step inside, and the small changes continue. The EcoSport S is based on the top-spec Titanium+ variant. So, it borrows all the good stuff from it including cruise control, automatic air-conditioning and that 8-inch touchscreen (with SYNC3, Android Auto and Apple CarPlay) while adding a whole lot more.

First, you get the all-important sunroof. Public service announcement: don't let your kids stick their heads out of this - that's just plain dangerous. Second, that bland MID we cribbed about when we first drove the EcoSport - that’s gone. In its place is a crisp, 4.2-inch MID that packs in a whole lot of information.

You can also use the MID to toggle Hill Assist on/off, set the delay for the auto headlamps and view the current radio station/track being played. It also acts as a display for the tyre pressure monitoring system, a feature that has now been struck off the Titanium+’ variant list. Minor updates including the colour-coordinated interior panels, the orange stitch on the steering, and the updated upholstery tie things up well inside the cabin.

The S, then does add enough novelty, if not as much fun to the package. If it were up to us, we'd drop the ride height, slap on a set of stickier tyres and trade in some of the Ecosport’s versatility for some fun. But, Ford hasn't done that in the interest of making sure the S appeals to a wider buying audience.

Is it worth the extra cash? Well, if you were eyeing the Titanium+ model, the S, priced at Rs 11.37 lakh for the EcoBoost and Rs 11.89 lakh for the diesel, is going to cost you an extra Rs 85,000. The new features including the HID headlamps, sunroof and the updated instrument cluster are well worth the premium you’d shell out.

If you pick the petrol, you also get the added bonus of the peppy 1.0-litre motor and that new 6-speed gearbox. The punch from the turbo’ed motor is possibly just what the doctor ordered. But, the highlight, again, is the engine’s drivability whether inside the city or on the highway. It'd make for a great daily driver too if it wasn't for the stiff ride quality.

Also, what we aren’t particularly happy about is the fact that a few features such as the 17-inch alloys and TPMS have been moved from the Titanium+ variant to the top-spec S. And it’s not like the Titanium+ has gotten any more affordable because of these deletions.

The reason to the buy the S, then, is that you really, really want an EcoBoost engine under the bonnet and all the flash Ford has to offer. If you can make peace with a slightly smaller feature list and a milder but sensible petrol, we'd still recommend the 1.5-litre Dragon in the Titanium+ trim. Also, if you just need the bragging rights of a sunroof, there’s always the Signature Edition that’s a full lakh cheaper compared to the S.