The Ecosport has undergone a major makeover. Though it still looks pretty similar, the petrol engine, automatic gearbox and the cabin are all new. But, have the updates taken away from the EcoSport's sporty personality? 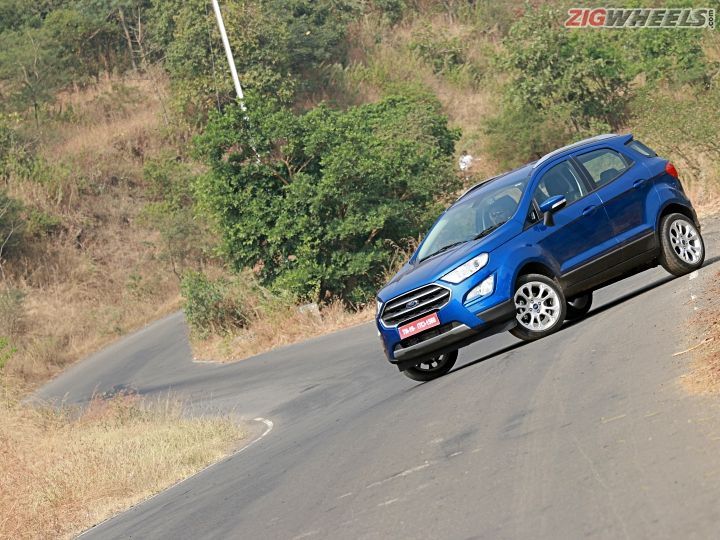 You get up early in the morning six days a week, wear a card around your neck which now defines your identity, drive a dull hatchback to work and drive back. Getting a bit sick of the daily grind? Want to add a pinch of fun to this charade. That’s where the refreshed EcoSport comes in.

Probably one of the sharpest handling cars you can get for about Rs 10 lakh, the Ford Ecosport has always found an audience with people looking for comfort and premiumness without compromising on handling and excitement. With Ford giving the sub-4 metre SUV a mid-life update, including an all-new 6-speed automatic gearbox, we had to take it out for a spin to find out if it still retains all the characteristics that made it popular in the first place.

Now, 3-cylinder engines are known to produce a bucketful of vibrations. But with the new motor, the only time it will hit you that it is one is during cranking it and shutting it off. Once its warmed up and on the move, however, the engine is vibe-free and hums away as the revs build. Drive the SUV with a light foot till about 60kmph and the gearbox works nicely. It has a knack for smooth upshifts and does so between 1500-2000rpm. In fact, it upshifts whenever its given a chance to improve fuel efficiency. The downside to this is that the engine doesn’t feel particularly punchy or eager to get a move on.

That said, you can keep the revs in the meat of the powerband by putting your foot down a little harder. The gearbox logic adapts swiftly and the gearchanges start to happen at around the 2500rpm mark. It is here that you can feel the engine has a few more horses that are egging to get out from under the bonnet. This is also the most comfortable spot for overtaking as the gearbox is swift to shift down and pull you forward. Driven like that in the city, the car returned 7.04kmpl in our efficiency run, which is quite worrisome.

On the highway, the gearbox’s tendency to keep the revs low becomes a hassle, especially while overtaking. Flooring the pedal causes a downshift, which does take a little time, but eventually gets you going. However, this very nature helps the EcoSport return 17.12kmpl so it's hard to complain.

But if you really want to get moving quickly, pull the gear lever down a notch and engage ‘Sport’ mode. It’s in this mode that the engine makes its peak power. It also makes the gearbox hold revs much longer while sharpening the throttle and making it feel snappy. It revs cleanly till about 5000rpm with a strong pull. The motor can rev to 6500rpm if you use the paddle shifters, but that doesn't do much good as the power starts to fade off in the last 1000rpm.

Although the new motor isn’t as exciting as the older 1.0-litre Ecoboost, it’s more linear and usable. Acceleration is most aggressive in ‘Sport’ mode and that's where you will get to have the most amount of fun. The new motor helps the EcoSport hit 100kmph in 12.51 seconds, but more impressive is the roll-on acceleration, which takes just 7.57seconds from 20-80kmph, making your life much easier in bumper to bumper traffic.

If there’s one thing which we wish could have been better, it’s the engine noise. It's not a particularly silent engine, and the note isn't something that the enthusiast would appreciate either.

Still Got The Moves

Engine performance is not enough to call a car sporty. Thankfully, the EcoSport has the goods to back it up. The suspension is slightly softer than before as the car gets revised bushes. This revision makes a big difference in the way it absorbs bumps, but takes away very little from how it handles.

The EcoSport is still sharp to turn. And with good feedback from the steering and tyres, it keeps you confident even at higher speeds. For someone who has driven the older car, the new one will feel like it has a bit more body roll, at least initially. But with the seats being properly contoured and the steering wheel slightly bigger than before, it still remains easy to chuck into corners. And because you feel so much of the road via the low-ish profile 205/50 R17 wheels, making slight corrections in your line is easy as well.

However, the larger tyres do become an issue over sharp bumps, broken roads and bigger undulations, which can be felt inside the cabin. That said, the SUV soaks up smaller, everyday roads rather well, and the suspension keeps you cushioned over speed breakers, provided you watch your speed.

The soft suspension has also made it a bit more prone to diving under braking. The brakes themselves are impressive, though. With a well tuned ABS unit, the car comes to a stop from 100kmph in a distance of 42.75m, which is better than the Maruti Vitara Brezza, but not as good as the Tata Nexon. However, the brakes lack feel due to the long travel of the pedal, which induces a learning curve.

The EcoSport’s driving experience remains engaging while being more practical for everyday use.

Apart from the engine, Ford has also updated the interior of the EcoSport. It now gets an all-new, all-black cabin which enhances its sporty character. The highlight, however, is the new floating 10-inch touchscreen unit, which has to be the best looking, most fluid and responsive unit in any car south of Rs 15 lakh. Sadly, it is only available in the Titanium and Titanium+ variants. The lower variants get a smaller 6.5-inch screen whereas the base version gets a smartphone dock. The system is compatible with Google Android Auto and Apple CarPlay but misses out on in-built navigation. The latest SYNC 3 interface is easy to use and quite practical too.

Every surface in the cabin feels premium, especially the steering wheel. It’s a lift from the Ford Focus and feels quite sporty. Even the floor pedals get a sporty satin aluminium finish. The seats continue to be a bit narrow but are well-contoured to keep you in place. You sit high up when compared to hatchbacks around you, giving you a commanding position. Visibility all around is par for the course, but the A-pillars become intrusive in close traffic. The black leather upholstery in this variant feels quite upmarket too. Its present on elbow rest pads on the doors as well.

The instrument cluster is the only dull element inside the cabin. It looks quite basic with a lot of empty space. The small monochrome driver’s display looks basic but packs in a lot of information like distance to empty and average fuel efficiency apart from a tyre pressure monitoring system. These modes can be toggled via buttons on the new steering wheel. The automatic AC control has been lifted from the Figo twins and fit quite well in here too. The only issue here is that the centre AC vents are placed too low and tends to freeze the driver’s left hand.

Coming to practicality, the Ecosport packs in a lot of storage spaces. There is space in the centre console, front doors, above the glove box and a pocket below the centre armrest, which is narrow and a little too deep, to store your knick-knacks. Like the front, the rear seats also get better cushioning but lack thigh support. The narrow cabin, however, makes it a strict 4-seater in our books. The leg space at the rear is only suitable for passengers up to 5’10’’. Any taller, and you will feel cramped. And although the rear bench does get an armrest, it misses out on cup holders.

Boot space remains the same as before at 352-litres. But it gets added practicality like a solid parcel shelf which can stay locked in an upwards position, a movable floor that can be adjusted to three positions and allows the base to become flat after folding the rear seats. This opens up 1178-litres of storage space. The overall cabin experience is premium, which is a big plus for a car in this segment.

One glance at the car and you will not mistake it for anything else. It does get a new face with a new aggressive-looking grille that is in line with Ford’s latest design language. The bumper and the headlamps have been revised as well and the latter finally gets LED DRLs too.

Move to the side and your eyes immediately move to the wheels. The 17-inch silver alloy wheels get an intriguing design that looks striking when combined with the low profile rubber. The door handles get a touch sensor instead of a keyless entry button. All you have to do is touch the handle and the EcoSport welcomes you. The rear remains practically unchanged with the door still opening from the right. If you found the older version of the sub-4 metre SUV a bit quirky, the latest refresh should fix that.

Although the older version of the EcoSport was fun to drive, it suffered from a cluttered cabin and a hard ride. Thankfully, Ford has fixed most of the issues with the facelift. Not only do you get a better looking interior, but it's also a lot more practical and tech-laden. The EcoSport is now way more accepting of Indian road conditions while still being one of the sharpest handling cars in its segment. When it comes to the looks, it certainly is the sportiest looking compact SUV in the country. The new 17-inch alloy wheels need a special mention as they make the SUV stand out from the crowd.

If you are looking for a good handling car with the convenience of an automatic and rarely have the need to seat five passengers, the Ford EcoSport is the best choice out there. However, if you can operate a stick, we’d recommend you go for the manual variant, which is not only Rs 83,000 cheaper but also a lot more frugal as well. However, If you are looking for something a bit more spacious and practical, competitors like the Maruti Suzuki Vitara Brezza and the Tata Nexon, though manuals, make a much stronger case.