There’s More Than Meets The Eye In The Ather 450X Compared To The 450!

While the two scooters may look more or less similar, Ather has made a plethora of changes where it really matters: under the skin 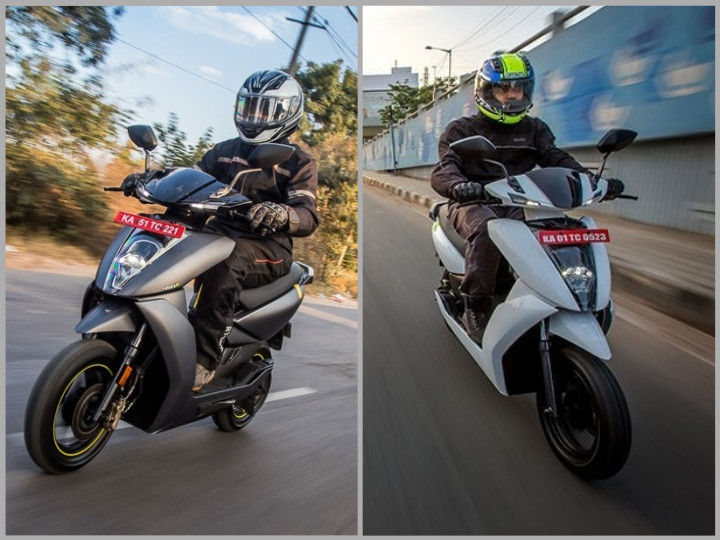 After multiple teasers, Ather Energy has finally launched the Ather 450X in the country. Looks-wise, the two scooters look more or less identical, save for the new colour schemes. However, the Bengaluru-based startup has made a host of changes to make the 450X a much better overall package. Here’s what they’re all about:

Ather has switched from 18650 lithium-ion battery cells to 21700, using the same type of cells that Tesla uses for its Model 3! This type is superior to the one used before in terms of energy density, thermal management and usable power without affecting the packaging. Hence Ather was able to incorporate the new battery pack into the existing chassis without needing to tinker with the dimensions of the battery bay. Along with the cells, the Battery Management System is also new to handle the added performance.

Ather has also increased the fast charging rate from 1km per minute to 1.45km per minute, which translates into a 45 per cent increase in charging speed. Since the battery is bigger than before, it takes slightly longer to charge using a conventional 5A home charging socket. The Ather 450 takes 5 hours 30 minutes to charge completely whereas the 450X takes 5 hours 45 minutes.

With the bigger battery, Ather has been able to tap the previously unexplored potential of the electric motor too. The company has updated the firmware of the motor and tweaked it to offer better power and torque figures.

The motor’s peak power has gone up from 5.4kW to 6kW while torque output has gone up from 20.5Nm to 26Nm. At 1:7.8, the reduction ratio is the same for both the scooters, so the peak torque at the wheel has increased from 159.9Nm to 202.8Nm. You can really feel the added grunt at low speeds, especially in Warp mode. As you can see from the table, the 450X really has set the benchmark not only for just electric scooters but also petrol-powered ones!

Sure, Ather has retained the same 80kmph top speed in the 450X as the standard model but what you get is a scooter that’s a lot briskier than before.

Ather has also upgraded the operating system for the TFT instrument cluster from Linux to Android. This coupled with the new 1.3Ghz Snapdragon 212 quad core processor with 4G (upgraded from a 1Ghz NXP IMX6 quad core with 3G connectivity) should result in more fluid user experience. Since the OS is now Android, it opens up the avenue for developers to come up with different apps compatible with the scooter. The Ather 450X also gets Bluetooth and WiFi, which enable the user to access new features like calls and music controls. It also makes the scooter ready for accessories like off-the-shelf tyre pressure monitoring system and even a connected helmet, which Ather plans to introduce in the future.

Other features like the all-LED lighting system and 22-litre underseat storage have remained unchanged. The Ather 450X is available in three colours: white, green and grey. While the white colour is more or less similar to the 450, the green and grey variants are completely new.

Is lighter and gets grippier optional tyres:

Ather has lightened the dashboard area and claims that that has reduced the steering inertia considerably. This coupled with better optimisation of the electronics package and slight tweaks in the frame has resulted in a massive 11kg drop in weight compared to the 2018 Ather 450, which weighed 118kg kerb.

The brand offers fatter 100-section front and 110-section rear TVS Remora tyres as an option in the 450X. While these offer better feedback and grip than the standard MRF units (same as the one on the Ather 450), they are slightly heavier, thus increasing the unsprung mass. So this might affect the real-world range.

Other underpinnings like the telescopic front fork, rear monoshock, 200mm petal disc up front and 190mm rear petal unit are all the same as the standard model.

Gets a different pricing scheme too:

The Ather 450X costs Rs 99,000 (ex-showroom Bengaluru) and Rs 85,000 (ex-showroom Delhi, thanks to a bigger subsidy there). But under this pricing scheme, one will have to avail either a Plus or a Pro pack compulsorily. Here’s what these packs offer:

Ather is essentially monetising the performance potential of the scooter with these two packs. One can switch the packs whenever one pleases, for better usability. Under these schemes, the user can avail a virtually unlimited km warranty and will also be eligible for further upgrades, effectively rendering the scooter future-proof.

If the customer isn’t interested in the recurring expenditure, Ather also has an upfront pricing scheme. It costs Rs 1.49 lakh for the Ather 450X with the Plus Pack whereas the one with the Pro Pack is priced at Rs 1.59 lakh, both ex-showroom Bengaluru. Thanks to the bigger subsidy in Delhi, the price for these two versions go down to Rs 1.35 lakh and Rs 1.45 lakh, ex-showroom, respectively, including subsidies. But under this scheme, the battery warranty is limited to three years. Additionally, one will also have to compulsorily get one of the Ather subscription packs, which start from Rs 3,000 per year.

On the other hand, the Ather 450 is priced at Rs 1,13,715, on-road Bengaluru. Like the 450X with the upfront pricing scheme, customers using the 450 will also have to avail one of the subscription packs compulsorily.