The elegant-looking electric flat tracker is called ‘The Quiet Riot’ 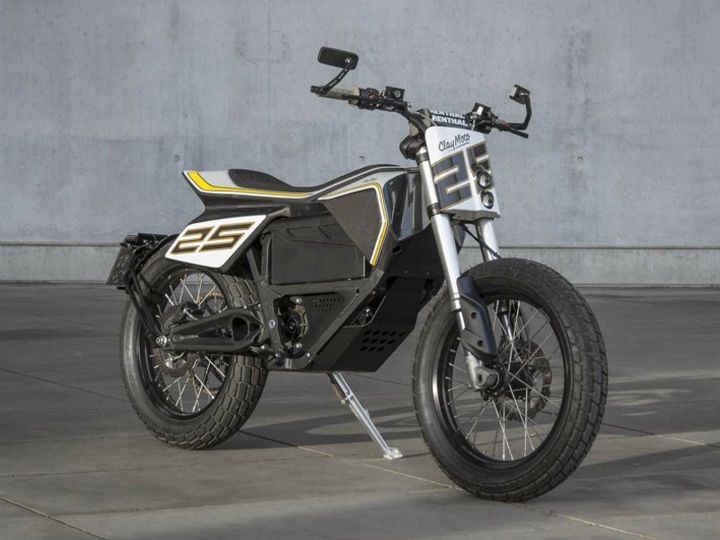 If you’re under the impression that electric two-wheelers aren’t fun and exciting, then you’ve clearly never heard of Zero Motorcycles. The American bike maker has five electric motorcycles in its portfolio: two naked offerings, two supermoto(ish) motorcycles, and an adventure tourer. As if riding an electric supermoto bike with no sound wasn’t enough, the bike maker gave a spare FX to the custom house ClayMoto, who has turned it into a flat tracker! Meet the ‘Quiet Riot.’ Quite aptly named, isn’t it?

To make the FX featherweight, ClayMoto has replaced the body panel with custom carbon fibre panels, which weigh just 2.4kg in total! The standard headlamp has been replaced by a pair of LED units and, of course, this flat tracker comes with a number plate on the side!

Just like the standard model, this custom FX also comes equipped with spoke wheels, but ClayMoto has increased the size to 19 inches at both ends and added Shinko flat track tyres, which should help the bike go sideways, just like it was meant to. The custom house has also shortened the suspension to help it corner freely around a flat track arena. The chain-belt drive is replaced by the good ol’ chain and sprocket unit. Additionally, as there’s no clutch lever in an electric motorcycle, ClayMoto has used that vacant space to fit the rear brake lever, for better braking power.

There’s no word on whether the custom builders have tweaked the motor or not. In the FX, this 6.5kWh battery has a rated output of 46PS of power and a whopping 106Nm of torque. That’s 106Nm at your disposal from 0rpm… on a flat track arena! If this is what the future holds for us, then we’re all game!