The SWM Superdual T will go up against the Kawasaki Versys 650, Suzuki V-Strom 650 and the upcoming Benelli TRK 502 in India 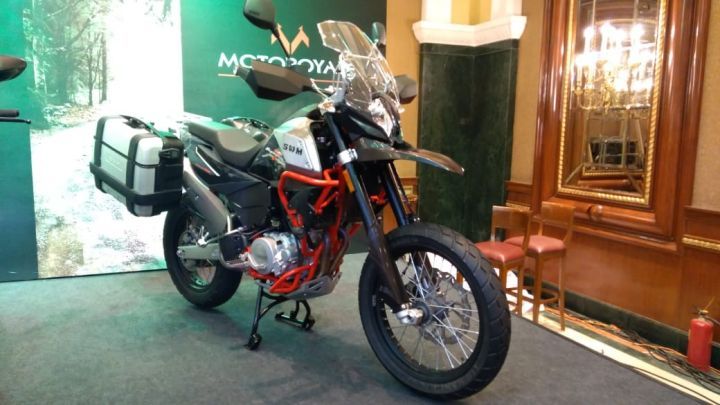 Kinetic-owned Motoroyale has launched the 650cc SWM Superdual T in India. Priced at Rs 6.8 lakh (ex-showroom, pan-India) for the base variant, the adventure tourer competes against the Kawasaki Versys 650, the upcoming Benelli TRK 502 and Suzuki V-Strom 650XT.

Before we talk about the bike in detail, here's a brief history on the brand, one of the latest additions to Kinetic’s new multi-brand dealership. SWM was founded in 1971 by Piero Sironi and Fausto Vergani. The Italian bikemaker’s portfolio largely consists of classics, supermotos, enduros and adventure tourers. Currently, it has around 13 motorcycles in its lineup. Out of these, only the Superdual T is coming to our shores for now.

A brief look at the Superdual T might have you mistaking it for an enduro bike, and we won't blame you for that. This is especially evident when you look at its front beak, tall windscreen, low-slung fuel tank, low seat height, high-rise suspension and dual-purpose tyres.

Powering the SWM is a 650cc, single-cylinder, liquid-cooled engine, mated to a 6-speed gearbox. This mill puts out a respectable 54PS of power and 53.5Nm of torque. We had the chance to take it for a spin in Italy as well. First ride impressions here. Motoroyale offers an accessorized version of the Superdual T too, at Rs 7.3 lakh (ex-showroom, pan-India). This variant features engine guard, skid plate, pannier mounting points and fog lamps.

Other bikes on sale in India, in the mid-size adventure category, include the Kawasaki Versys 650 (Rs 6.69 lakh) and the Suzuki V-Strom 650 (Rs 7.46 lakh), which not only enjoy a better dealership network but a more popular brand name as well. But what works in favour of the SWM Superdual T's favour is this interesting new recipe of a Husqvarna powered single-cylinder engine with the endurance bike like styling, which should make it a more eager off-road machine.

Along with the SWM Superdual T, Motoroyale also launched six other motorcycles from Hyosung, FB Mondial, Norton and MV Agusta.