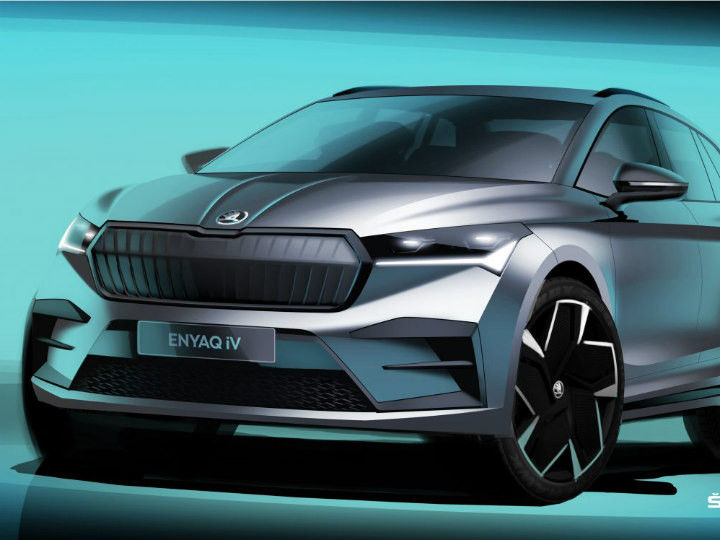 As the global debut of Skoda’s first ever electric vehicle, the Enyaq iV, gets closer, more details have been revealed of the upcoming crossover. Shortly after we got a design sketch of the cabin, the carmaker has released another design sketch giving us a glimpse of the exterior design. It can be considered the upcoming Volkswagen ID.4 electric SUV’s sibling as the Enyaq iV will be based on the Volkswagen Group’s MEB dedicated EV platform.

The design sketch reveals the Enyaq iV sporting more of an SUV silhouette than the prototypes spotted testing earlier. That said, there are some familiar bits from modern Skoda models like the butterfly grille, C-shaped tail lights and matrix LED headlamps with DRLs. Skoda Auto’s head of exterior design, Karl Neuhold also revealed some interesting tidbits about the Enyaq iV design like its drag coefficient value of 0.27, which is indeed aero efficient.

Heading inside, the Enyaq iV sports a cabin inspired from the fourth-gen Octavia with highlights such as a 13-inch central touchscreen, two-spoke steering wheel and a practical lower centre console thanks to a simple drive selector.  It will be loaded with features like connected car technology, a heads-up display, and 585-litres of boot space. What’s more, recycled materials have been used for the interior. The seat upholstery consists of 40 percent wool with the rest being a blend of polyester from recycled PET bottles.

The Enyag iV will be spoilt for choice when it comes to variants with five options: 50, 60, 80, 80X and a performance-oriented vRS variant. Each variant features different powertrain configurations with different states of tune, battery capacities and drivetrains. Here’s a detailed look at them:

The Skoda Enyaq iV is likely to launch globally by the end of this year. There’s no word on whether the electric crossover will make it to Indian shores, but it is likely to happen in the near future.