The middleweight adventure-tourer motorcycle from KTM is ready to make a smashing entry at EICMA, but it isn’t coming to India 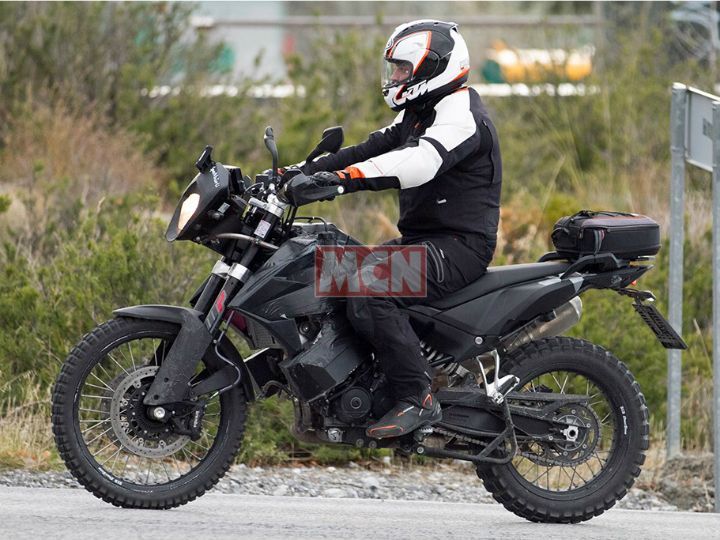 We first caught a glimpse of the upcoming KTM 790 Adventure when it was undergoing testing in late 2016. Since then, we haven’t spotted any spy shots of the new adventure motorcycle but KTM engineers have been working hard in developing the bike, and the new motorcycle is all set to make its world debut at the 2017 EICMA motorcycle show in Milan, Italy. The festival will run from the 7th of November to the 12th of November. From the spy images, one could make out that the bike will be equipped with same 800cc parallel-twin engine that powers the new KTM 790 Duke. While not much is known about its specs yet, in terms of performance, one can expect it to go head on with the Africa Twin and the Triumph Tiger 800 series. Hence, it would be fair to say that the bike will churn out around 100PS of power and the engine will be mated to a 6-speed transmission.

Hidden in the spy shots, the new KTM adventure tourer is expected to get an all-LED headlight. The bike will also come with twin fuel tanks, allowing you to ride for longer without worrying about refuelling.
It will also come with an LCD dashboard resting on the front cowl. The rear subframe also looks wide and big, suggesting that there is provision for carrying panniers.

The wheels are the trademark steel spoked wheels that an adventure motorcycle sports. While the front one is 21-inch, the rear is smaller and stands at 18 inches; and further, the bike comes with DID Dirt Star rims. The rim size allows the bike to handle both off-road tyres and dual-purpose ones as per your needs. The on-road bike, however, is likely to sport 19- and 17-inch cast alloy wheels at the front and rear respectively.
Considering that it's supposed to be an adventure tourer, it also gets a suspension setup that is suitable for heavy off-roading. At the front, it sports long-travel USD forks while the rear gets a horizontally mounted adjustable monoshock.

The bike also comes with twin disc brakes at the front and a single one at the rear, all with 2-pot callipers each. It will get electronic aids such as ABS and traction control, and three riding modes with an extra one for the R version of the bike.
Sadly for Indian bikers, KTM has no plans to launch the new 790 Adventure in India, but we hope that it does. It can look at the Triumph Tiger 800 for inspiration, as it received massive success in India, and the 790 Adventure has all the ingredients to make a great middleweight adventure tourer motorcycle.