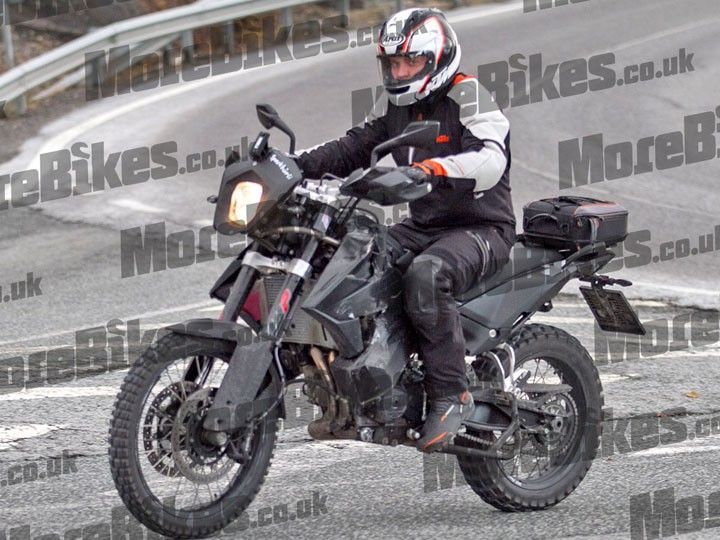 Seen here are the spy images of the new 800cc adventure motorcycle from KTM. Disguised under heavy camouflage, the bike was reported to be spotted doing on-road tests for fuel consumption figures under different speeds and terrains. KTM’s head Stephan Pierer had recently confirmed about the 800cc adventure bike and we expect it to carry the name ‘790 Adventure’ as per the nomenclature of other KTM bikes. Based on the 790 Duke prototype showcased at the 2016 EICMA, the 790 will be the entry-level adventure tourer bike in the KTM portfolio before the 390 Adventure makes its debut.

The spy images give a lot away. For instance, to begin with the bike will be powered by an 800cc parallel-twin motor strapped onto a new chassis. It will be the same engine that KTM had been developing to compete with other middle-weight street bikes in the market. The power output of the bike is yet unknown but can be expected to be north of 100PS.

The test bike had a healthy amount of suspension travel allowing it to tackle some serious off-roading. The front features upside down forks with long travel while the rear gets a horizontally mounted monoshock mounted directly on the swingarm. Staying true to the Adventure genes, the bike sports the typical spoked 21-inch and 18-inch wheels at the front and back respectively. Braking is taken care by dual-discs with 2-pot calipers each at front and a single disc unit with a 2-pot caliper at the rear.

In terms of looks, the bike features a small headlight assembly that has probably been lifted from the factory’s part bin and is likely to be replaced with a complete fairing with a LED headlamp unit like other Adventure bikes from KTM. The body panels feature a minimalistic design suggesting it to be a light-weight offering.

It is expected that the 790 Adventure will make its official debut in the coming year followed by its sale commencing in 2018. Now, for the Indian market, KTM already has a facility in India and if they plan on bringing the 790 Adventure here they will be assembled as bikes under 800cc that will require homologation. On the competition front, the 790 Adventure will undercut its rivals likes of the Triumph’s Tiger 800 series and the BMW F800GS with respect to pricing.