The lineup includes an electric cruiser, a sportbike and two e-scooters. 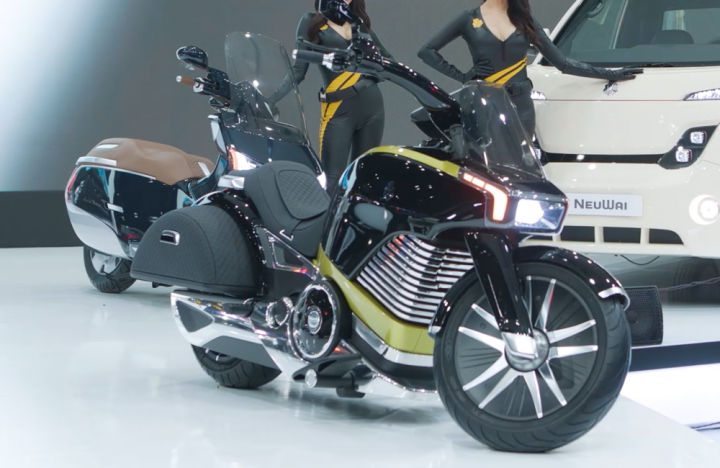 There’s no denying that the future of transportation is electric. With pollution levels on the rise, governments have been pushing two-wheeler manufacturers to take the leap of faith and transition to electric-powered vehicles. One such manufacturer - NeuWai (a sub-brand of Chinese Sunguo Motors) - rode the waves at the Seoul Motor Show where it showcased not one but four new electric two-wheelers. The portfolio includes an electric cruiser, a sportbike and two e-scooters.

To begin with, NeuWai showcased a first of its kind electric cruiser called the MT104. It’s said to feature a massive 19Kw battery - the largest ever fitted to an electric motorcycle - and a 20kW-35kW electric motor. While that sounds impressive, the setup is capable of returning just 140km on a single charge (making it less touring friendly) and a top speed of 150kmph. According to NeuWai, the motor can be tweaked as per the requirements of the region, which means it could compromise on power to extract more range or vice versa. On the feature front, the bike seems to have a full-digital instrument console, LED lights, panniers, easy-to-reach handlebars and unique wheel designs.

Then there’s the sportbike christened MF104 which uses the exact same powertrain as the cruiser. However, it's able to extract more performance from the battery and motor. Peak power is rated at 40kW but you could expect a minimum of 25kW even when the battery loses charge. As a result, the bike has a claimed top speed of 200kmph and a range of 150km. The overall design of the bikes is quite appealing and looks almost as if it’s been picked off the sets of RoboCop.

The brand's portfolio also includes two peculiar-looking electric scooters - the CN104 and CL104. The former is the smaller scooter which packs a 3.5Kw continuous and 6.6Kw electric motor capable of delivering a claimed range of 45km on a single charge and a top whack of 90kmph. Interestingly, it’s rated to be a single-seater despite having space for a pillion rider.

But if you’re looking to go the distance, the CL104 would prove to be a better bet. It employs a larger 7.2 kW continuous, 11.3 kW peak motor and a 4.7 kWh battery that delivers a company claimed range of 80km (per/charge) and a top speed of 100kmph that should put it up with some of the fastest electric scooters out there.

NeuWai says the production and delivery of these electric two-wheelers will commence early next year. Prices, however, are still kept under the hat.