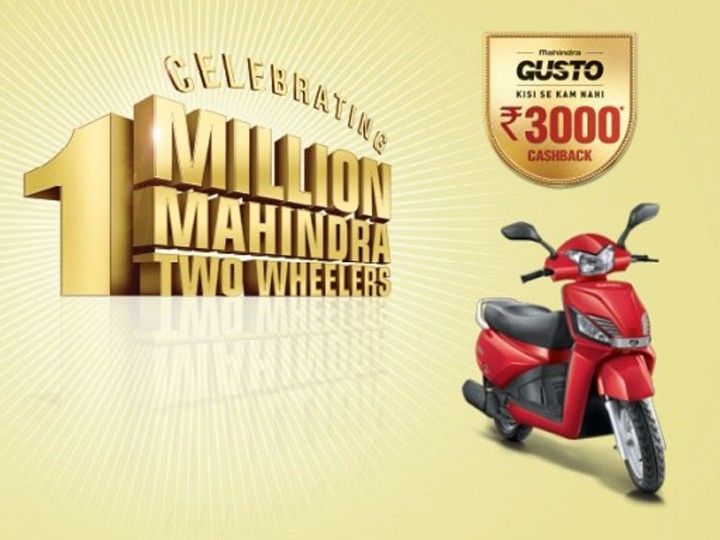 Mahindra Two Wheelers announced that it will be offering cashbacks on the Centuro motorcycle and the Gusto scooter. Sales for Mahindra two-wheeler offerings in India have crossed the 1 million mark and to celebrate this achievement it is offering special discounts on its two popular products. Customers buying the Mahindra Centuro 110cc commuter motorcycle can avail cashback worth Rs 5,000 while that for Gusto customers is Rs 3,000. However the above scheme isn’t applicable to the Mahindra Mojo which is its flagship offering. The base variant of the Mahindra Centuro has been priced at Rs 43,250 and the Gusto DX carries a sticker price of Rs 45,410 (both prices are ex-showroom Delhi). The above cashback scheme will be available only for a limited period of time and if you were planning to buy the Centuro or the Gusto now is the best time to finalise your buying decision.

Apart from celebrating its 1 million sales achievements, the cashback scheme looks more of an attempt by Mahindra to increase its sales which have been disappointing in the recent past. In fact overall sales have also slid from1,65,364 unit in FY2014-15 to 1,44,355 units during the last fiscal. Mahindra will be hoping that the above discounts should enable it in regaining the lost ground and it is also developing a new 150cc commuter bike. The upcoming Mahindra 150cc bike will be priced aggressively similar to any 125cc offering on sale in the Indian market but will have the benefit of more power. Also it had recently launched the Gusto 125cc scooter which has been launched in only few states and we expect it to be made available in other states as well by end of 2016.