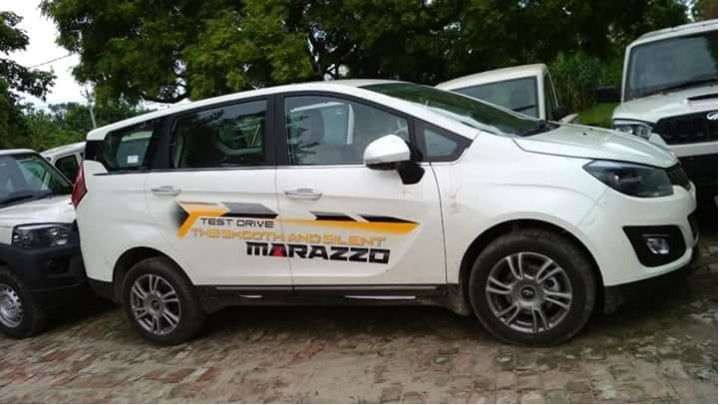 By now, you probably already know that Mahindra is set to launch its upcoming compact-MPV, the Marazzo, on 3 September 2018. While the company have been teasing us with glimpses of its new MPV on social media regularly these days, spy pics of the car have now surfaced online, leaving nothing up to the imagination.

Test drive units of the car in both red and white paint schemes were spied today. This is also the first time we're seeing the chrome-tooth grille, which according to the company is inspired by a shark, in the flesh. Also visible for the first time is the twin-chamber projector headlamp with LED DRLs. While it may not outright resemble a shark, its grille and headlamp design certainly complements the aggressive design.

As fun as the Marazzo looks from the outside, the interior of the car trades in excitement for a premium feel. For starters, the dashboard gets piano black inserts with dull silver highlights. Then there's the touchscreen infotainment system and the climate control module. Coming to the steering wheel, it gets all sorts of controls, including multimedia control, hands-free call control and maybe even cruise control(?).

Being an MPV, Mahindra will be offering the Marazzo in both 7- and 8-seater configurations. While the 7-seater variant gets captain seats for the second row, the 8-seater variant will get bench seats for both second and third rows.

Coming to the engine, the company states that the Marazzo will be powered by a 'virtually new' engine. This could even be the improved version of the company’s mHawk 1.5-litre unit. While we are still waiting for a more detailed look at the car, here's our in-depth look at what we know so far. With just three more days left to go, we will be bringing our initial impressions of Mahindra's premium MPV shortly. Until then, stay tuned!