Will the upcoming Venue pose a threat to the bigger Creta? Here’s our analysis 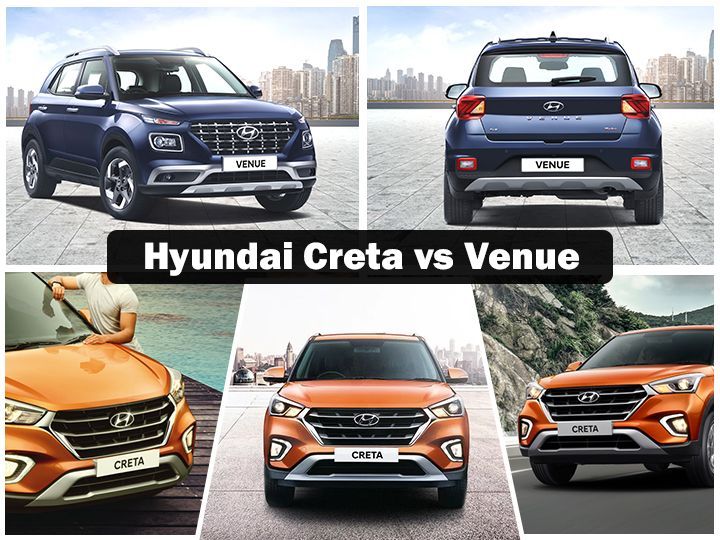 The fight for the crown of the best sub-4-metre SUV in India is all set to heat up in the coming months as the Hyundai Venue is reaching our shores on May 21. The baby Creta already looks worthy of upsetting the competition, which has an SUV from every other mainstream manufacturer in India. But not only is the Venue looking to woo buyers of other sub-compact SUVs in the country, it is also looking for a slice of the bigger pie. From what we know so far, the Venue will be a fully-loaded proposition from Hyundai with a host of segment-first features and the only one to offer a dual-clutch gearbox.

Its elder sibling, the Creta, came to India in 2015, and has been the segment leader ever since its introduction. Even though the Creta and the Venue are not in the same segment, they are likely to overlap each other’s territory when it comes to pricing. Both the SUVs can seat the same number of people, share the same diesel engine, have similar kinds of equipment and most importantly, come from the same lineage.

Will the upcoming Venue pose a threat to the bigger Creta?We pit these siblings against each other on paper to find out if the Venue has what it takes to lure some customers away from the Creta:

From the size comparison above, it is clear that the Creta is bigger but the margin is not huge by segment standards. The Creta is longer than its younger sibling by 275mm but the width is only up by 10mm. It also sits higher than the Venue by around 75mm and the wheelbase is also longer by 90mm. The Venue is not the biggest car in its segment, neither is it the smallest. It is right up there with the competition when it comes to size, slotting in between its rivals which include the Tata Nexon, Ford Ecosport, Maruti Vitara Brezza and the Mahindra XUV300.

What the Venue is bringing to the table is a brand new 1.0-litre turbocharged engine which makes 120PS ad 172Nm coupled with an all-new in-house-developed 7-speed dual-clutch transmission or a 6-speed manual gearbox. The SUV is also available with the choice of a 1.2-litre petrol engine with mediocre figures of 83PS/114Nm. The Creta, on the other end, comes with a 1.6-litre naturally aspirated petrol engine that makes 122PS/151Nm coupled to a 6-speed automatic or manual transmission. The Venue is clearly ahead of the Creta in the powertrain department as it offers the 1.0-litre engine with the 7-speed DCT. The Venue also puts out similar output figures to that of the bigger Creta using a smaller but force-fed engine. Judging by the size and characteristics of the engine, it is also most likely to return better fuel economy than the Creta. The Venue also offers a choice of two petrol engines to pick from, which the Creta doesn't.

The Creta and the Venue share the same 1.4-litre diesel mill, which puts out 90PS and 220Nm of torque mated to a 6-speed manual transmission. Where the Creta punches above the Venue is with the 1.6-litre VGT engine which makes 128PS and 260Nm along with the choice of a 6-speed manual and automatic gearbox. So if diesel is what you’re eyeing for, the Creta makes a strong case for itself.

Which is better packed with goodies?

As far as features go, the Venue comes with Hyundai’s latest innovations in the form of BlueLink, a connected feature that helps you interact with the car and toggle functions like engine start/stop, climate control, door lock/unlock, horn honk and light flash and find my car. The Hyundai Blue Link connected car technology is a segment-first feature that works with an embedded SIM card and utilises a network connection from Vodafone Idea. It has a total of 33 features, out of which 10 are India-specific according to Hyundai.

The Creta misses out on the BlueLink but makes do with a basic version of it in the form of AutoLink, which helps you keep a check of the vehicle, driving habits, manage parking, get roadside assistance, and make a service request. The Creta, though, comes with powered driver seat and follow me home headlamps, which the Venue misses out on. Whereas the Venue gets projector fog lamps, HD display screen, wheel air curtains, and eco-coating over the Creta.

The upcoming Venue’s prices are expected to start from Rs 7.20 lakh - 12 lakh while the Creta is available from Rs 9.60 lakh to 15.63 lakh (ex-showroom India). If Hyundai prices the Venue around these expected lines, what you can get for the price of a fully loaded Venue is a choice between the lower variants of the Creta diesel, which include the 1.4 E Plus and the 1.4 S. When it comes to the petrol models, you can get either a 1.6 SX or a 1.6 E Plus variant.

The Venue does offer more choice when it comes to petrol engines, with the 1.0-litre turbocharged unit and the 7-speed DCT being the icing on the cake. The story has a different ending if you are considering a diesel though, as the Creta is available with a bigger 1.6-litre diesel engine which is more powerful and torquier than the 1.4-litre unit. Also, the Venue does not have the choice of a diesel automatic variant on offer, which you get with the Creta, albeit with a much higher price tag.

With its new connectivity features and a turbo petrol motor, the Venue is looking set to punch above its weight and could woo some potential customers away from the Creta. And while there might be some cannibalisation, Hyundai has already revealed the ix25 in China, which will come to India as the next-gen Creta next year. Not only will the next-gen Creta be bigger and much more feature-loaded with newer engines than the current model, it could also come in a 7-seater version. That will definitely move the Creta up the price spectrum in India, thus widening the gap with its younger sibling.

What would you pick between the Venue and the Creta and why? Do let us know in the comments section below.